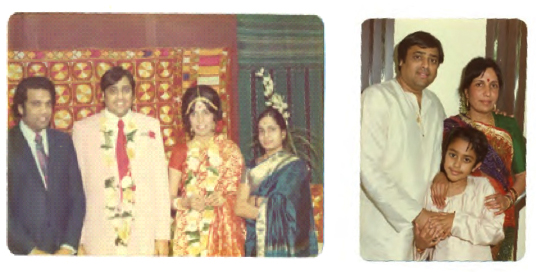 (Left) Anand’s parents’ wedding day in New Jersey, 1974. (Right) Anand and his parents posing for a family portrait in India.

My parents came to the U.S. in the early 1970’s to pursue higher education.  Although he was an engineer in India, my father went to Michigan State University to study finance and business management and later transitioned into a career in hospital administration. My mother completed her medical training in India and came to the U.S. for her post-graduate training and ultimately specialized in family practice. My aunt introduced my parents to each other and they were married in New Jersey in 1974. 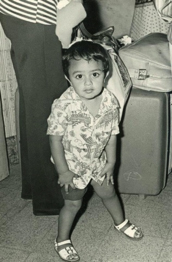 Anand, age 2, at Mumbai Airport when his mother picked him up from India.

I was born in Detroit, Michigan in 1976. At the age of one my parents sent me to live with my grandparents in India to learn more about my culture and heritage while they worked hard to establish themselves in the U.S.  My parents had little money when they first arrived to this country. The combination of being far away from family, having to experience harsh North American winters, and trying to assimilate into a new society, all while trying to take care of a newborn, made the experience even more challenging. That’s why relying on my grandparents in those early years was such an incredible support system for my parents.

(Left) Anand and his parents on his graduation from the University of Michigan. (Right) Anand on a horse as part of his traditional wedding day procession.

In spite of all those challenges, my parents taught me the importance of holding strong to our cultural traditions. As proud Indian-Americans, we have remained connected to our Indian language, food, clothing, and customs. For example, when I was married, I rode in on a horse as is traditionally done in many parts of India. Growing up Hindu in the U.S., I was also taught the importance of our religious traditions and we regularly celebrated auspicious festivals such as Diwali.

My parents also instilled in me a focus on working hard and academic excellence. These were traits that they gained through trying to succeed in a new country and then passed on to me as formative cultural values. Many of my relatives are highly educated and several are physicians.  I saw medicine as a family trade and was drawn to it from a young age.  However, I ultimately felt a different type of calling to the profession. I studied political science in undergrad and received my graduate training in medicine and public health. My parents always taught me the importance of serving community and society and so I chose to pursue a health policy career where, rather than helping patients one at a time,  I could work on issues on a larger scale and help improve the health of entire populations.

And so, as the son of immigrants, I learned from my parents the value of a good education and adopted their passion for community and public health.

Anand K. Parekh, M.D., M.P.H., is the Deputy Assistant Secretary for Health (Science and Medicine) at the U.S. Department of Health and Human Services. In this capacity, he provides oversight, direction, and coordination of activities on a range of emerging public health and science issues and the continuum of medical research – including clinical science and health services research.  He has provided leadership on a variety of health issues, including quality of care improvement, chronic care management, disease prevention and health promotion, substance abuse prevention and control, and seasonal influenza vaccine promotion.

Anand completed his undergraduate studies in political science, as well as his graduate school training in medicine and public health, at the University of Michigan. He completed his residency training in the Osler Medical Training Program of the Department of Medicine at Johns Hopkins Hospital. Anand currently holds a Medical Staff position at Holy Cross Hospital in Silver Spring, Maryland, and practices at the Holy Cross Hospital Health Center, a low-income clinic for the uninsured. He is also a part-time Assistant Professor in the Department of Medicine at Johns Hopkins Hospital.