July 2, 2015 at 9:30 AM ET by Betsey Stevenson
Twitter Facebook Email
Summary:
The economy added 223,000 jobs in June as the unemployment rate fell to 5.3 percent. Our economy has now added 5.6 million jobs over the past two years, the strongest two-year job growth since 2000.

The economy added 223,000 jobs in June as the unemployment rate fell to 5.3 percent. Our economy has now added 5.6 million jobs over the past two years, the strongest two-year job growth since 2000. But despite this progress, there is more work to do. We must continue to build on the positive trends underlying our economy by ensuring that Americans working overtime receive a fair day’s pay, opening new markets for U.S. goods and services through expanded trade, increasing investments in infrastructure, providing relief from the sequester, and raising the minimum wage.

FIVE KEY POINTS ON THE LABOR MARKET IN JUNE 2015

1. The private sector has added 12.8 million jobs over 64 straight months of job growth, extending the longest streak on record. Today we learned that total nonfarm employment rose by 223,000 in June—and all those jobs came from the private sector. Although total job growth was revised down somewhat in April and May, much of the revision is attributable to lower government employment than previously estimated. On the whole, our economy has added 2.9 million new jobs over the past twelve months, near the fifteen-year high achieved in February. 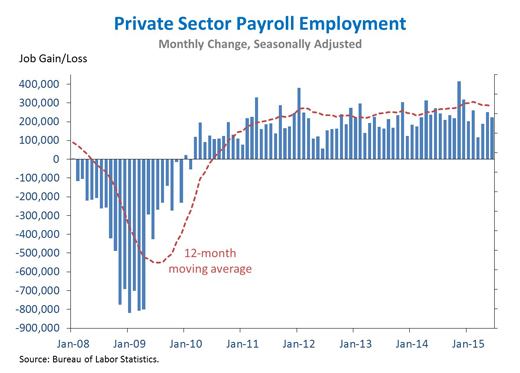 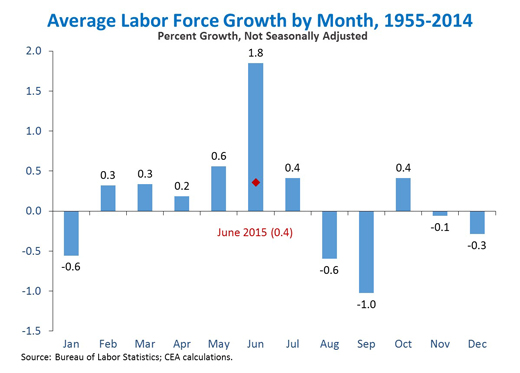 One contributing factor was the timing of the “reference week”—the week for which households report their labor force status in the Current Population Survey. Each month, the reference week is the Sunday-to-Saturday period that includes the 12th day of the month. Last month, the 12th was a Friday, pushing the reference week earlier in the month than normal. Accordingly, a smaller fraction of June’s labor force gains were likely captured in this year’s survey than in prior Junes. In fact, since 1955, June labor force growth has averaged 2.0 percent when the 12th has been a Sunday, Monday, or Tuesday, but only 1.7 percent when the 12th has been a Thursday, Friday, or Saturday. That 0.3 percentage-point gap alone represents nearly 500,000 members of the labor force. 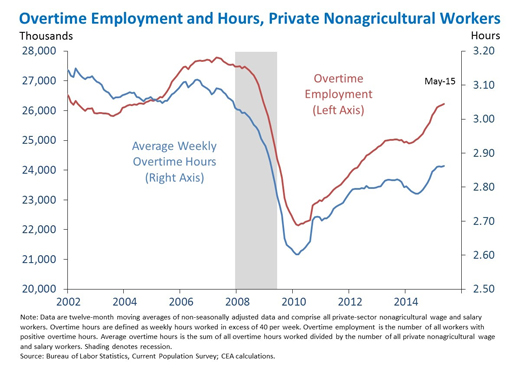 4. The share of workers who are unemployed due to job loss, as opposed to new entrants searching for a job, has returned to its pre-crisis level. The distribution of reasons for unemployment shifts with the business cycle. When overall unemployment is higher, more of the unemployed tend to have lost their previous jobs. When overall unemployment is lower, more of the unemployed are labor force entrants, either new or returning, who have begun job searches. (A third category, the fraction of unemployed who voluntarily left their jobs, is also cyclical but accounts for less of the variation.)  Over the past year, the fraction of unemployed persons who lost their jobs returned to its average level from 2005 and 2006. Notably, the distribution has stabilized over the past eight months, with the breakdown of unemployed looking much like it did before the crisis struck. However, the fraction accounted for by job losses is still above its level from the height of the late 1990s expansion. 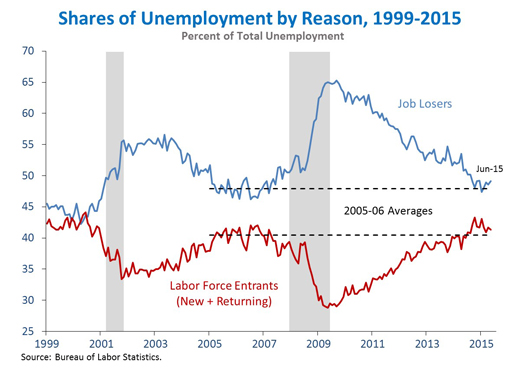 5. The distribution of job growth across industries generally followed recent trends in June, but some industries saw especially weak or strong months. June was an especially strong month for financial activities (+20,000), retail trade (+33,000), temporary help (+20,000), information (+7,000), and other services (+10,000). June was a weaker than usual month in construction (unchanged), wholesale trade (unchanged), utilities (unchanged), manufacturing (+4,000), and leisure and hospitality (+22,000). Across the 17 industries shown below, the correlation between the most recent one-month percent change and the average percent change over the last twelve months fell to 0.80 from 0.90 last month, but remained well above the average correlation in previous months. 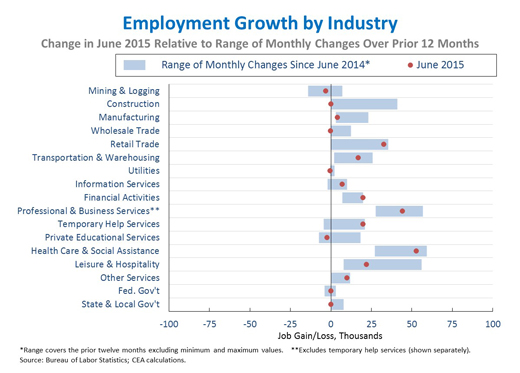 Betsey Stevenson is a Member of the Council of Economic Advisers.