July 7, 2015 at 10:17 AM ET by Jo Handelsman
Twitter Facebook Email
Summary:
Last month, I shared some thoughts about why we do basic research. This month, I’d like to comment on two unique examples of how we do it.

Last month, I shared some thoughts about why we do basic research. This month, I’d like to comment on two unique examples of how we do it. Research in some cutting-edge fields of science can be done on a tabletop or by a lone researcher with nothing more than a paper and pencil, but exploring certain frontiers of knowledge requires major facilities and large teams of researchers. Recently, I and others from my staff had the privilege of visiting two of the Nation’s extraordinary science facilities to learn more about their capabilities and discuss how they support the Administration’s science priorities and initiatives.

We started our explorations at Fermilab, the leading facility for particle physics in the United States, where we toured the underground neutrino detectors, the accelerator component test facilities, and the remote-operations centers for experiments located on-site, at the major European physics center (CERN), and elsewhere. Physicists study the behavior of the elusive neutrinos by using very high-intensity accelerators to produce beams of them that are then smashed into carefully designed targets. I thought I was brave for daring to stand in the path of a neutrino beam…before I learned that the neutrinos rarely interact with other matter and are pretty much harmless.

I expected that the detectors that let us “see” neutrinos would be small and delicate like the particles themselves, so I was amazed by the scale of the massive, sophisticated neutrino detector, which seemed like a gigantic hunk of iron to me. The photo below shows us next to the NOvA near detector, which is situated approximately 350 feet underground and weighs about 280 tons. But the scale of the equipment, while staggering, isn’t as awe-inspiring as the science itself, which tells us about fundamental particles of matter and the very essence of the universe. I look forward to touring the facilities for the next generation of neutrino experiments, which will require even bigger detectors placed even deeper underground, at a specific distance from the neutrino source. 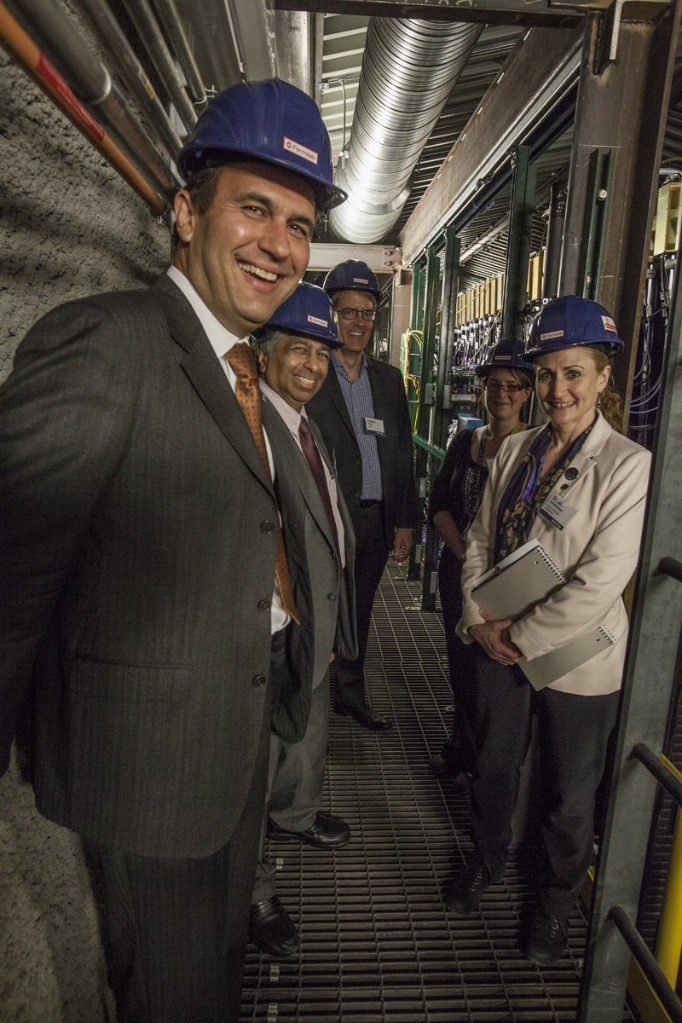 Our next stop was Argonne National Laboratory, whose scientists address synergistic issues in energy research across a broad spectrum of topical areas, with a focus on basic science, scientific facilities, energy resources, and environmental management. At Argonne, we toured the Center for Nanoscale Materials user facility; the Advanced Photon Source (APS) synchrotron; the Advanced Protein Characterization Facility; and Argonne’s Leadership Class computing facility, home to Mira, one of the fastest supercomputers in the world. These facilities are open to the broad scientific community, enabling the best ideas from all over to be explored and tested. The APS is a huge, ring-shaped machine – more than a kilometer in circumference – that can produce intense X-ray beams that let us probe what is happening in materials at the tiniest levels – a few nanometers, the size of just a handful of atoms. It’s for that very reason that the nanoscience center and the protein characterization facility are directly adjacent and connected to the APS.

Both Fermilab and Argonne are components of the Department of Energy’s National Laboratory system, part of the larger network of U.S. Federal laboratories and research facilities. These institutions are operated by a variety of agencies that support research, including the Department of Commerce, Department of Defense, National Science Foundation, and others. Together, they accelerate scientific discovery, technological development, innovation, and progress for our Nation.