The Decline in Long-Term Interest Rates

July 14, 2015 at 5:35 PM ET by Maurice Obstfeld and Linda Tesar
Twitter Facebook Email
Summary:
A new report by the Council of Economic Advisers surveys the latest thinking on the many drivers of interest rates, both in recent decades and into the future.

The level of long-term interest rates is of central importance in the macroeconomy. It matters to borrowers looking to start a business or buy a home; lenders evaluating the risk and rewards of extending credit; savers preparing for college or retirement; and policymakers crafting the government’s budget.

Long-term interest rates in the United States have been falling since the early 1980s and have reached historically low levels. But does this experience indicate that the level of long-term interest rates has shifted to a lower long-run equilibrium? A new report by the Council of Economic Advisers surveys the latest thinking on the many drivers of interest rates, both in recent decades and into the future. While there is no definitive answer to the question, most explanations for currently low long-term interest rates suggest that in the long run, they will remain lower relative to those that prevailed before the financial crisis.

The Behavior of Long-Term Interest Rates

The decline in interest rates over the last three decades has at least three notable characteristics:

The natural question – "Are long-term interest rates likely to stabilize at levels permanently below those that prevailed before the financial crisis?" – is an important one for policymakers and private-sector decision makers alike, yet economic analysts disagree on the answer.

A recent debate between two eminent economists and former policymakers, Ben Bernanke and Larry Summers, epitomizes the disagreement. Drawing on his “global saving glut” theory, Bernanke sees world interest rates pushed down by excessive global saving that is largely the result of government policies such as foreign reserve accumulation. To the extent those polices are reversed, interest rates should rise. Summers, however, attributes low interest rates to chronically deficient demand, under a hypothesis called “secular stagnation.” This view argues that prolonged low interest rates are inevitable and will continue unless governments step in directly with policies to boost aggregate demand, such as higher infrastructure spending.

What Do Markets Forecast?

Prices of financial assets are based on expectations about the future. Traders in bond markets often perform “forward transactions” that involve selling and buying assets with different maturity lengths; such transactions can provide a proxy for expectations of future interest rates. For example, purchasing a 20-year Treasury bond, while simultaneously selling an asset that pays the first ten years of its coupon payments, approximates the purchase of a 10-year bond in 10 years. The net cost of that transaction yields a measure of the 10-year interest rate expected to prevail in ten years, called the forward rate.

As the figure below shows, the forward rate measure of the expected 10-year interest rate has declined sharply over time and currently stands at 3.1 percent, substantially below most professional forecasts. 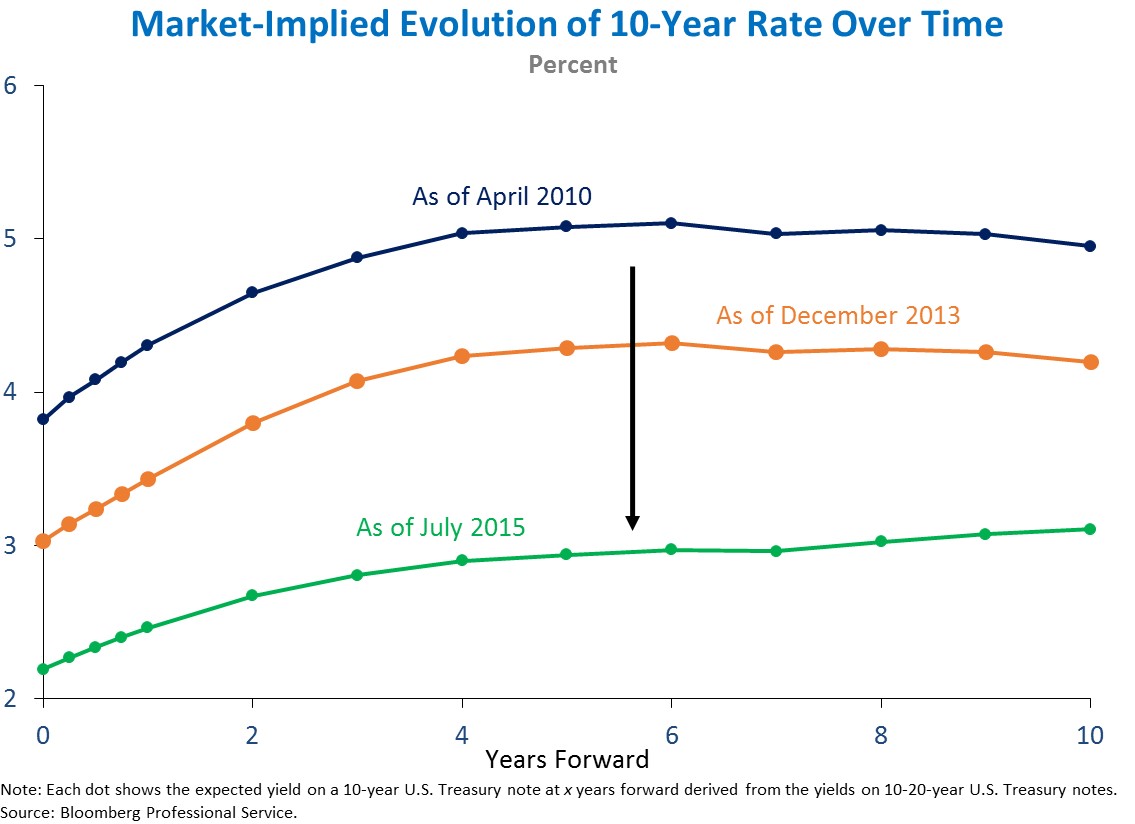 Factors that Have Contributed to Declining Interest Rates

An alternative way to think about whether the level of long-term interest rates has shifted to a lower long-run equilibrium is to examine the factors that have lowered rates today and assess which of them are likely to continue, although there is considerable uncertainty in undertaking this exercise.

Factors that Likely Are Transitory

Factors that Likely Are Longer-Lived