July 14, 2015 at 3:50 PM ET by Shaun Donovan
Twitter Facebook Email
Summary:
Today, the Office of Management and Budget released the 2016 Mid-Session Review (MSR), which updates the Administration’s estimates for outlays, receipts, and the deficit in light of economic, legislative, and other developments that occurred since the release of the President’s 2016 Budget in February.

Today, the Office of Management and Budget released the 2016 Mid-Session Review (MSR), which updates the Administration’s estimates for outlays, receipts, and the deficit in light of economic, legislative, and other developments that occurred since the release of the President’s 2016 Budget in February.

Under the President’s leadership, the deficit has been cut by more than two-thirds as a share of the economy, representing the most rapid sustained deficit reduction since World War II, and it continues to fall.  The MSR projects a $455 billion deficit in 2015, which is 2.6 percent of GDP, nearly $30 billion less than last year’s deficit and $128 billion lower than the projection of the 2015 deficit back in February.  To further strengthen the long-term fiscal outlook and put the Nation on a sustainable fiscal path, the President’s Budget proposes $1.75 trillion of deficit reduction over 10 years, primarily from health, tax, and immigration reform.  The MSR confirms that the President’s policies will keep deficits low and stabilize debt as a share of the economy.  Deficits under the President’s proposed policies will continue to fall to between 2.2 and 2.4 percent of GDP over the next three years and stabilize at 2.7 percent of GDP in the second half of the 10-year budget window, avoiding the increases that would occur without these policies. 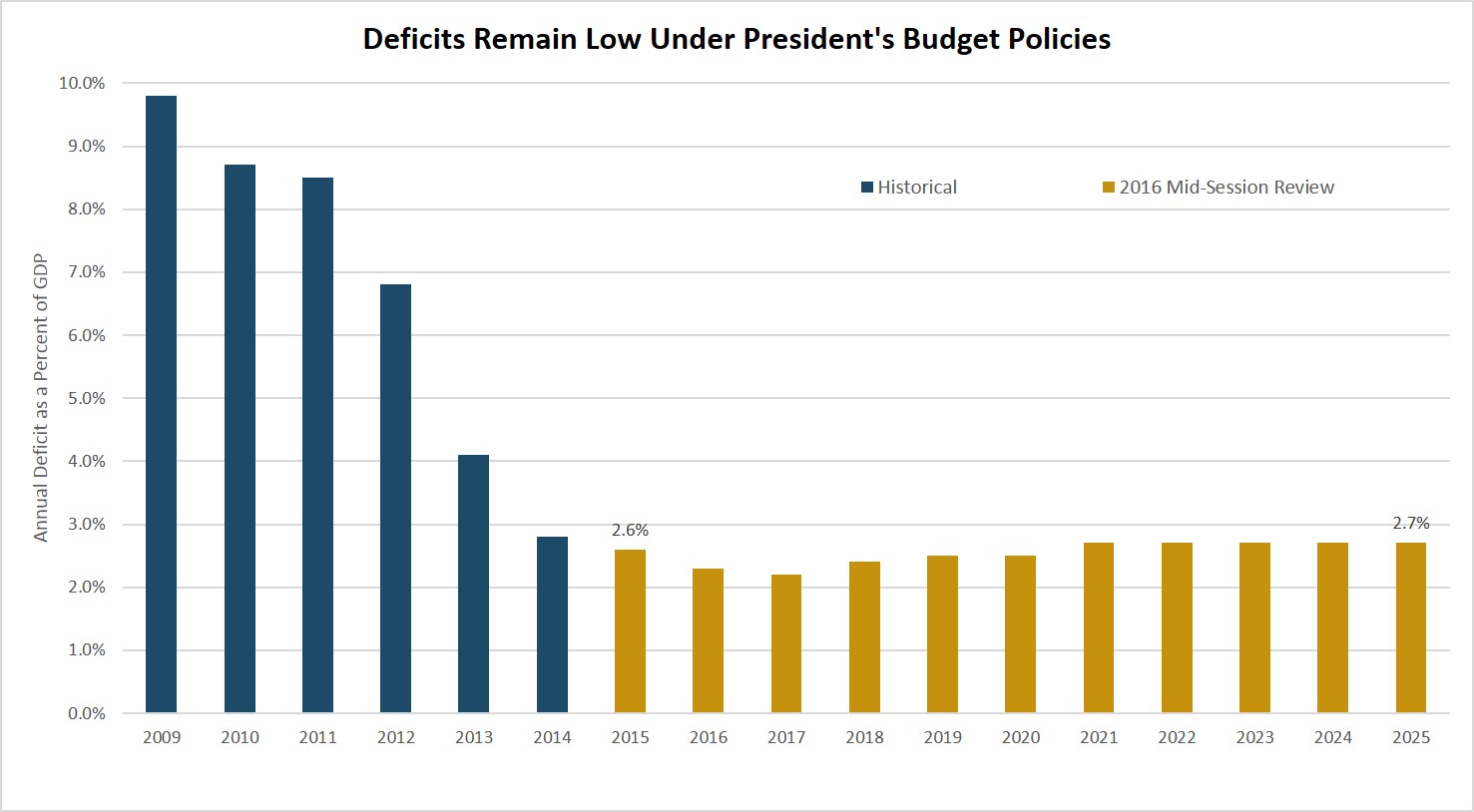 At the same time, the American people’s determination and resilience, coupled with the Administration’s efforts, are driving the economy full steam ahead.  Businesses have added 12.8 million jobs over 64 straight months of private-sector job growth.  Since the beginning of 2014, job growth has accelerated and the unemployment rate has fallen to 5.3 percent.  The United States is producing more oil than it imports, and domestic natural gas and wind production has been setting record highs.  After five years of implementation of the Affordable Care Act, more than 16 million people have gained health insurance coverage, bringing the uninsured rate to the lowest level on record.  Meanwhile, during the period since the Affordable Care Act became law, health care prices have grown at the slowest rate in nearly 50 years.

But the President believes more can be done, and our top priority must remain accelerating growth while expanding opportunity for all Americans.  The President's 2016 Budget is designed to bring middle class economics into the 21st Century.  The Budget reverses sequestration and shows what we can do if we invest in America's future and commit to an economy that rewards hard work, generates rising incomes, and allows everyone to share in the prosperity of a growing America.  It lays out a strategy to strengthen our middle class and help America's hard-working families get ahead in a time of economic and technological change.  And it makes the critical investments needed to accelerate and sustain economic growth in the long run, including in research, education, training, and infrastructure.

America’s promise has always been that if we work hard, we can change our circumstances for the better.  The Budget lays out a strategy to reach that promise by investing in the drivers of growth and opportunity for all Americans.  The numbers show we have a plan that works and we do not have to choose between making those critical investments and putting the Nation’s finances on a strong and sustainable path.  What we cannot afford is a return to the short-sighted austerity in the Congressional Republicans’ 2016 budget.  The President has been clear that he will not accept a budget that locks in sequestration going forward, nor one that reverses sequestration for defense without also reversing sequestration for education, research, and other non-defense priorities because he recognizes that our economic prosperity and our national security are linked.  The only path forward on the budget is a bipartisan, commonsense solution that recognizes that principle and reverses sequestration for both defense and non-defense.  That is the approach that the President’s 2016 Budget embodies; that the Congress was able to come together to support on a bipartisan basis two years ago; and that Members from both parties have urged.

Shaun Donovan is the Director of the Office of Management and Budget.