No young person should have to face the future without hope and optimism. Young people should be excited to learn, to grow, to succeed and to contribute to their communities. But in many disadvantaged neighborhoods and for many young people of color, opportunity gaps strangle hope.

That doesn’t have to be the case — we can do something about it. I believe government has no greater obligation than to help expand opportunity with smart, strategic investments. That’s why, in the last few weeks, the Department of Labor has awarded nearly $22.5 million to seven communities to help connect youth and young adults (ages 16 to 29) with job opportunities. 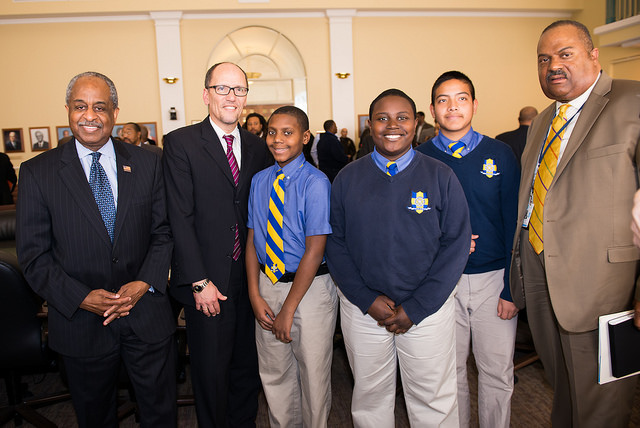 When young people of color are on the sidelines, it hurts them, their families and their communities. But there’s a cost to us all and a drag on the national economy — lost productivity, a shrunken labor force, smothered growth. A new report from the White House Council on Economic Advisers concludes we must close persistent opportunity gaps to maintain our competitiveness in the global economy.

If men of color age 16-54 had the same labor force participation rate as their white male peers, for example, it would increase GDP by 2 percent. And that’s not even counting the 1 in 6 black men who are essentially missing from their communities, primarily because they are incarcerated or they died young. If you add them to the civilian population, the economic impact would be even greater.

President Obama recognizes the value — for individuals, their communities and the nation at large — in making sure every single person can get in the game. That’s why he launched the My Brother’s Keeper initiative more than a year ago, rallying communities nationwide to empower boys and young men of color — helping them to have better schools, sustained mentoring, safer communities and greater hope.

Our DOL demonstration grants will help prepare young people for work in construction, manufacturing, hospitality, health care, IT, transportation and logistics and other growing industries. They will fund an array of critical services, from financial literacy to apprenticeship training to leadership development to mental health and substance abuse counseling. The grants involve partnerships with community and faith based organizations, educational institutions, foundations and employers.

Government can’t meet this challenge on its own. The private sector in particular must be a part of the solution. The recent pledge by a Starbucks-led coalition of employers to hire 100,000 low-income young people over the next three years is the kind of commitment necessary to continue to grow our economy and create a stronger middle class.

Your ZIP code shouldn’t determine your destiny in America. At DOL, working with partners in the business community and elsewhere, we will continue to do everything possible to ensure that everyone, regardless of the circumstances of their birth, can reach their highest and best dreams.