Social Security Disability Insurance: A Lifeline for Millions of American Workers and Their Families

The Social Security Disability Insurance (SSDI) program is a vital lifeline for millions of American workers and their families. It is a critical component of our nation's Social Security system, which provides insurance to workers and their families in retirement and in the event of a serious, long-term disability. Millions of workers have benefited and from SSDI since it was established nearly 60 years ago. And the 11 million Americans who currently benefit from SSDI could face a deep and abrupt 19 percent reduction in benefits if lawmakers fail to act to address a long-projected shortfall in the program’s finances.

Today, the White House is releasing a report that explains how this critical program works, who it helps, and its importance for working families.

How the Program Works

SSDI is an insurance program that workers pay for while they are working. If a worker can no longer maintain substantial employment due to a severe disability, SSDI replaces a portion of lost income. Beneficiaries earn coverage under the Social Security system by working and paying into the system.

Most individuals receiving SSDI earned middle-class wages before becoming disabled, and beneficiaries paid into Social Security for an average of 22 years before becoming eligible for SSDI. To receive SSDI benefits, workers must have a significant and recent work history, in addition to a serious disability that prevents them from performing substantial work for a sustained period of time. These benefits are modest but they help families pay bills and put food on the table.

Who the Program Helps

Today, more than 150 million Americans are covered by the SSDI program, which means they would receive benefits if they became severely disabled and could not work and earn a living. As with Social Security retirement benefits, SSDI is available to Americans who have a significant work history and have paid a portion of their paychecks into the program. In total, 11 million Americans receive SSDI benefits, including 9 million worker-beneficiaries and 2 million dependent children and spouses of worker-beneficiaries. About one million military veterans receive SSDI. Most SSDI worker-beneficiaries worked most or all of their adult lives before becoming disabled and half of SSDI beneficiaries attended college. Disability insurance protects workers in all sectors of the economy, with large shares of SSDI beneficiaries coming from the service, manufacturing, and retail sectors.

Benefits are Modest but Critical 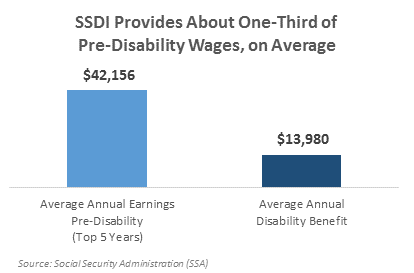 While modest, these benefits make a meaningful difference for people with disabilities who are no longer able to work. Overall, SSDI comprises more than half (58 percent) of SSDI beneficiaries’ family income.  SSDI benefits keep 3 million Americans out of poverty and reduce the depth of poverty for another 1.9 million people.

Growth in Disability Beneficiaries Has Slowed

As the population and labor force have grown and aged, so too has the number of Americans who are covered by and receive disability insurance. While the SSDI program has grown over the past 35 years, this growth has slowed significantly and is projected to remain steady. Most of this growth is due to well-documented demographic changes, including a growing and aging population and increases in women's labor force participation. As more women joined the labor force and paid into Social Security, more women achieve insured status and are protected if they become disabled. 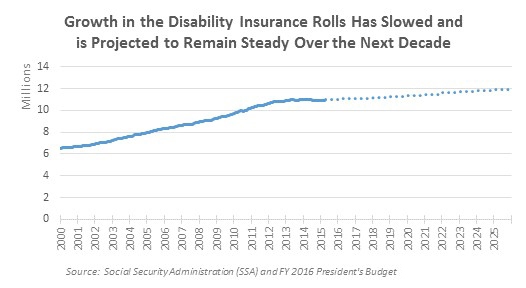 SSDI beneficiaries could face a deep and abrupt 19 percent reduction in their disability insurance benefits in 2016 if lawmakers fail to act to address the long-foreseen shortfall in the program’s finances. The shortfall was caused by a long-foreseen increase in the number of beneficiaries as population growth, the aging of the population, and increases in women's labor force participation raised the number of workers who contribute to and qualify for the program. The Social Security Trust Fund overall currently has enough money to provide full benefits to both DI beneficiaries and retirees for almost the next two decades, but funding across the two programs is out of balance.

The President has proposed a simple solution that policymakers have taken many times in the past on a bipartisan basis: rebalance the Social Security program in a way that ensures workers with disabilities, retirees, and survivors receive the full amount of earned and expected benefits while policymakers develop longer-term policies to strengthen the Social Security program as a whole.  The Administration looks forward to working with Congress to ensure that workers with disabilities and their families receive the full benefits they have earned and need.