What I Learned from Demond:

This afternoon, Denice W. Ross, a Presidential Innovation Fellow, sent the following message to the White House email list. She introduces readers to Demond Fortenberry, a 14-year-old resident of New Orleans who participated in a local coding event last week, where the City of New Orleans previewed four data sets related to policing.

Keep reading to learn more about the event -- and if you didn't get the email, sign up for email updates here.

Last week, at a coding event in New Orleans, 14-year-old Demond Fortenberry blew me away with his data-savvy and curiosity.

At the event, hosted by local nonprofit Operation Spark, the City of New Orleans previewed four policing-related data sets. As the password for viewing the data came up on the screen, I reflexively cracked open my laptop to dive in -- but fortunately, I had the good sense to close it back up. This time, I wanted to experience the unveiling of a new data set from the perspective of a young coder.

I was a little nervous at first about whether this never-before-seen data would catch the attention of Demond and the other young coders. But watching Demond work with the data -- and build a collaborative working relationship with city leadership in the process -- removed any of those fears.

From incident locations to readouts on the demographics, he recognized what was happening in his community, and he started to ask questions.

Read the full story here, and pass it on -- and then find out how you can get involved. 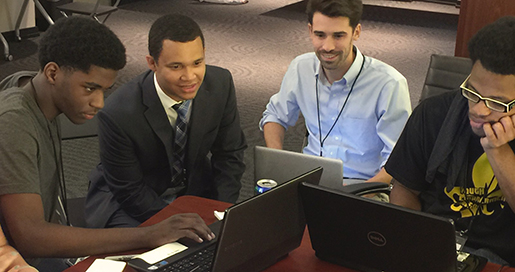 The New Orleans event made me even more confident that we’re going in the right direction with our open data work.

This past May, in response to the President's Task Force on 21st Century Policing, the White House launched the Police Data Initiative -- an effort to encourage better use of data and technology to reduce the inappropriate use of force and build community trust.

New Orleans is one of the 24 jurisdictions nationwide participating in the Police Data Initiative -- communities that have committed to open data sets about policing, and to participate in a peer-learning network to share data innovations across law enforcement agencies.

Because of the initiative, we're seeing a lot of innovative ideas across the country just like last week's coding event. The Seattle Police Department recently hosted a workshop for law enforcement agencies and technologists on balancing privacy and transparency in body camera data. And the Dallas Police Department posted 12 years of data on officer-involved shootings in a machine-readable format so anyone can analyze and visualize the data.

By bringing community members and leaders together with top technologists, researchers, data scientists, and design experts, the Police Data Initiative is accelerating progress around data transparency and analysis -- a critical step toward the ultimate goal of building trust between police and the communities that they protect and serve.

Learn more about last week's event in New Orleans, as well as the Police Data Initiative, and see how you can get involved.