A Look Back at We the People Petitions: 2011 to Today

July 28, 2015 at 6:00 AM ET by Molly Wolfe
Twitter Facebook Email
Summary:
Take a look back at ten of this Administration's responses to We the People petitions.

“My administration is committed to creating an unprecedented level of openness in government. We will work together to ensure the public trust and establish a system of transparency, public participation, and collaboration. Openness will strengthen our democracy and promote efficiency and effectiveness in government.”
President Obama

Since we launched We the People in 2011, millions of Americans have engaged with their government on the issues that matter to them. This groundbreaking online platform has made petitioning the government, a First Amendment right, more accessible than ever. Over the past few years, the Obama administration has taken a stance on a number of causes that citizens really care about and used the We the People petition platform to voice their concerns. Check out We the People -- where you can create or sign petitions -- here.

Today, the White House released responses to 20 outstanding We the People petitions. We're recommitting to the platform in a big way, integrating with Change.org to reach even more Americans and guaranteeing that you'll hear from us within 60 days after the petition you signed has gathered the required signatures.

As we gear up for this new phase, take a look back at responses from the last four years.

1. The President Records a Special Message for a Petition on Reducing Gun Violence

In the days since the tragedy in Newtown, Americans from all over the country have called for action to reduce gun violence. Hundreds of thousands of you have signed petitions on the White House's We the People petitions platform.

On December 19, 2012, the President outlined a series of first steps we can take to begin the work of ending this cycle of violence:

"We know this is a complex issue that stirs deeply held passions and political divides. And as I said on Sunday night, there's no law or set of laws that can prevent every senseless act of violence in our society. We're going to need to work on making access to mental health care at least as easy as access to a gun. We're going to need to look more closely at a culture that all too often glorifies guns and violence. And any actions we must take must begin inside the home and inside our hearts.

But the fact that this problem is complex can no longer be an excuse for doing nothing. The fact that we can't prevent every act of violence doesn't mean we can't steadily reduce the violence, and prevent the very worst violence."

Read this response to petitioners here.

2. Ale to the Chief: We Release the White House Beer Recipe

When Americans got wind of our official White House beer in 2012, Americans hopped on the We the People platform to demand we release the receipe. Then-White House Chef Sam Kass offered a pun-tastic response.

"With public excitement about White House beer fermenting such a buzz, we decided we better hop right to it.

Inspired by home brewers from across the country, last year President Obama bought a home brewing kit for the kitchen. After the few first drafts, we landed on some great recipes that came from a local brew shop. We received some tips from a couple of home brewers who work in the White House who helped us amend it and make it our own. To be honest, we were surprised that the beer turned out so well since none of us had brewed beer before."

Read his full response here -- and don't forget to check out the full recipe here.

3. A Petition on Cell Phone Unlocking Leads to a Legislative Fix 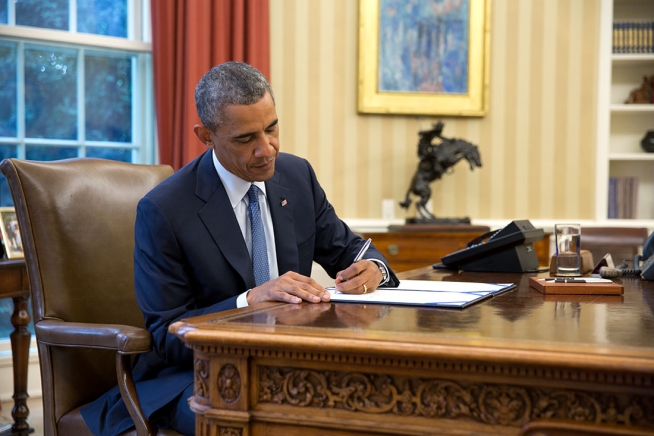 In March of 2013, we responded to a petition asking us to make it legal to unlcok cell phones. We agreed:

"The White House agrees with the 114,000+ of you who believe that consumers should be able to unlock their cell phones without risking criminal or other penalties. In fact, we believe the same principle should also apply to tablets, which are increasingly similar to smart phones. And if you have paid for your mobile device, and aren't bound by a service agreement or other obligation, you should be able to use it on another network. It's common sense, crucial for protecting consumer choice, and important for ensuring we continue to have the vibrant, competitive wireless market that delivers innovative products and solid service to meet consumers' needs."

In fact, the President agreed so much that he signed a bill into law to do just that, making this the first We the People petition idea to ever become law. Read the original response and updates here--then learn more about how cell phone unlocking went from a good idea to the law of the land.

4. A Death Star? This Isn’t the Petition Response You’re Looking For

In 2013, it seems quite a few Americans wanted the President to achieve one major priority by the end of his Administration: Build a Death Star. We don't think this is the response they were hoping for:

"The Administration shares your desire for job creation and a strong national defense, but a Death Star isn't on the horizon. Here are a few reasons:

•  The Administration does not support blowing up planets.

•  Why would we spend countless taxpayer dollars on a Death Star with a fundamental flaw that can be exploited by a one-man starship?

However, look carefully (here's how) and you'll notice something already floating in the sky -- that's no Moon, it's a Space Station!"

5. The Administration Offers Support for Banning LGBTQ+ Conversion Therapy for the First Time

In America, you should be able to live the life you choose -- no matter who you are, where you're from, what you look like, or who you love. That is why, when so many Americans asked us to take a position on banning conversion therapy, Senior Advisor to the President Valerie Jarrett responded in support:

"Conversion therapy generally refers to any practices by mental health providers that seek to change an individual’s sexual orientation or gender identity. Often, this practice is used on minors, who lack the legal authority to make their own medical and mental health decisions. We share your concern about its potentially devastating effects on the lives of transgender as well as gay, lesbian, bisexual, and queer youth.

As part of our dedication to protecting America’s youth, this Administration supports efforts to ban the use of conversion therapy for minors."

6. A Petition on the Use of Body-Worn Cameras Becomes an Ongoing Conversation

Since the officer-involved shooting death of Michael Brown on August 9, we have borne witness to unrest in the city of Ferguson, Missouri. Ferguson, of course, is not the only community to be struck by such tragedy. Recent events in Staten Island, Cleveland, and Baltimore have brought both national and international attention to issues that have long affected too many communities in America.

Many Americans wrote in to the Administration to support technology -- like body-worn cameras -- that could help reduce these incidences. Roy Austin, Deputy Assistant to the President for Urban Affairs, Justice, and Opportunity, responded:

7. A Pun-Filled Response to a Petition on Honoring Our National Pastime

Baseball is most certainly an American pastime, so why not make it a national holiday? That's what thousands of Americans wanted to know, so they created a petition asking the Administration to knock this one out of the park. Press Secretary Josh Earnest responded:

"While we are sympathetic to your pitch to make Opening Day a national holiday, it's a little outside our strike zone: creating permanent federal holidays is traditionally the purview of Congress. So, it's up to the men and women on Capitol Hill to decide whether to swing at this pitch."

Millions of Americans across the country are passionate about protecting an open and free Internet. So is the President. So when we received a petition asking the President to make net neutrality a reality in America, we responded:

The President has been a strong and consistent advocate of net neutrality since his first presidential campaign.

And in February of 2015, the FCC followed through, voting in favor of a strong net neutrality rule.

9. We Reaffirm That Obamacare Isn't Going Anywhere (and Why That's a Good Thing)

Thanks to the Affordable Care Act, more than 16 million Americans have the peace of mind in knowing they're insured. However, since its passage 5 years ago, there has been a lot of misinformation spread about this historic law that has spurred calls for its repeal, including through our petitions platform. Here's how we responded:

"There are a lot of myths out there about the Affordable Care Act. The idea that the health care law will somehow cripple the economy is absolutely one of those myths.

The health care law won't hurt jobs or the middle class, and it won’t force small businesses to close up shop. It will, however, make health care more affordable and expand health insurance coverage to millions of Americans in a way that allows our nation’s businesses to continue to thrive."

We are a nation of immigrants. Immigrants have helped build our country into what is today and will be essential to our success in the future. That is why the President is so committed to passing comprehensive immigration reform. So when thousands of Americans asked where he stood on this issue, here's how we responded:

"We need common-sense immigration reform to make sure everyone plays by the same set of rules.

Not only is it the right thing to do morally, it’s the right thing for our country: Independent economists say immigration reform will grow our economy and shrink our deficits by almost $1 trillion in the next 20 years. For those of you counting at home, that’s 12.5 billion concert tickets -- or 100 billion copies of Mr. Bieber’s debut album.

You better believe it. While we weren’t able to address your direct concerns about Mr. Bieber, we hope you believe your We the People experience was a positive one."

We invite you all to learn more about We the People petitions and get involved in the dialogue between policymakers here in Washington and Americans around the country.