How We’re Changing the Way We Respond to Petitions

July 28, 2015 at 9:30 AM ET by Jason Goldman
Twitter Facebook Email
Summary:
Today, the White House is responding to every petition in our We the People backlog  —  20 in all —  re-affirming its commitment to the petitions platform.

The Right to Petition is a Constitutional Right

In its final clause, the First Amendment of the Constitution protects the right of the American people “to petition the Government for a redress of grievances.” It’s right up there along religion, speech, press, and assembly. 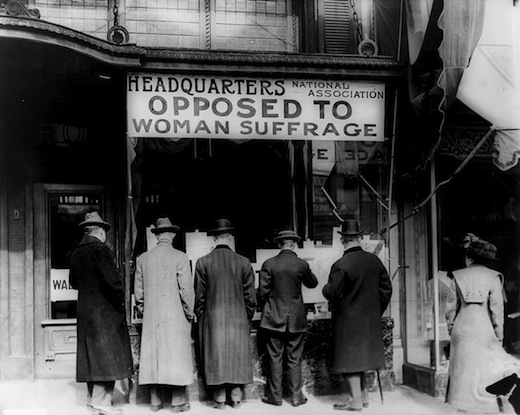 Yet while it guarantees the right to petition, the First Amendment doesn’t explain how to petition or what the government owes in response. Over the years, many people have petitioned the government by sending written letters to the White House and Congress, asking for assistance and expressing grievances on a variety of issues. For example, in 1897, Native Hawaiians who petitioned Congress were successful in temporarily blocking the annexation of the Hawaiian Islands. And in 1874, suffragette Susan B. Anthony petitioned Congress to remit a fine imposed on her after she was arrested for casting a vote in the 1872 election in Rochester, New York.

Petitions haven’t always been on the right side of history, as evidenced by a 1917 petition to the U.S. Senate that opposed giving women the vote. That one came from the Women Voters Anti-Suffrage Party of New York.

We the People: Learning from Nearly Four Years of Online Petitions

In 2011 (years before I arrived at the White House) the team here developed a petitions platform called We the People. It provided a clear and easy way for the American people to petition their government — along with a threshold for action. Namely — once a petition gains 100,000 signatures.

This was a new system for the United States government, announced as a flagship effort in the first U.S. Open Government National Action Plan. Right now it exists only for the White House (Hey, Congress! We have an open API! Get in touch!) Some other countries, including Germany and the United Kingdom, do online petitions, too. In fact, the European Parliament has even started its own online petitioning platform.

For the most part, we’ve been pretty good about responding — before today, the Obama Administration had responded to 255 petitions that had collectively gathered more than 11 million signatures. That’s more than 91 percent of the petitions that have met our threshold requiring a response. Some responses have taken a little longer than others. But now, I’m happy to say, we have caught up. 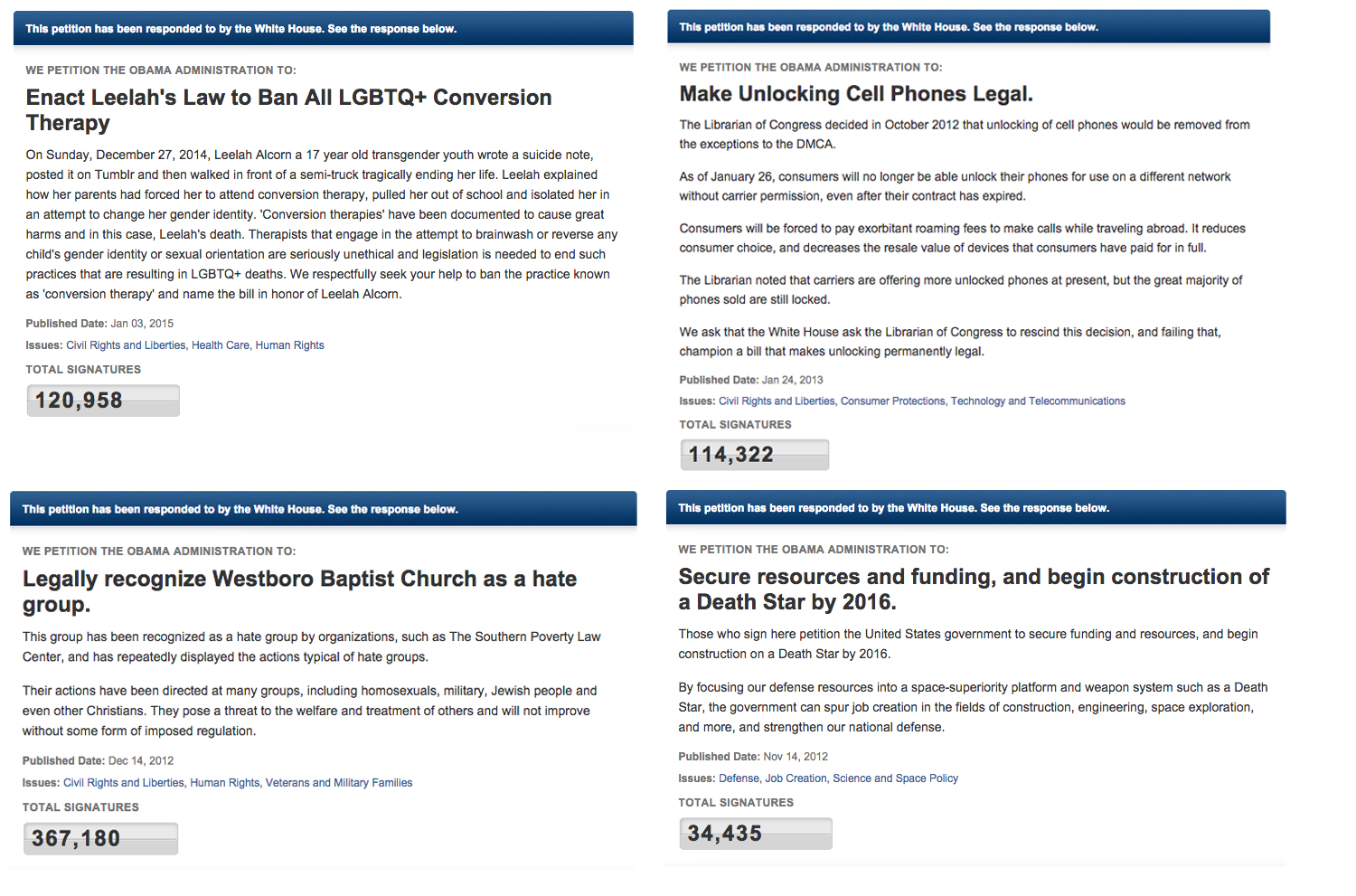 Today, the White House is responding to every petition in our We the People backlog — 20 in all.

This means that nearly 2.5 million people who had petitioned us to take action on something heard back today. And it’s our goal to make that response the start of the conversation, not the final page. The White House is made up of offices that research and analyze the kinds of policy issues raised by these petitions, and leaders from those offices will be taking questions today, and in the weeks to come, from petition signers, on topics such as vaccination policy, community policing, and other petition subjects.

Take a look at more We the People stats here.

We’ll start the conversation on Twitter. Follow @WeThePeople, and join the conversation using hashtag #WeThePeople. (I’ll be personally taking your questions on @Goldman44 about how we’re changing the platform specifically at 3:30 p.m. Eastern.)

We the People, Moving Forward

We’re going to be changing a few things about We the People.

You might not always be happy with what you hear from us, but we’ll be upfront with you about why we can’t take action on a given issue if we can’t — or about why we’re choosing not to. If there’s genuinely nothing we can do, we’re going to let you know. If we agree with you, we’ll let you know. If we’re working on it, we’ll tell you that. And we’ll keep you posted with additional details and related content that we think you might be interested in along the way.

After several years, we know that We the People is an exciting tool for transparent democracy. We’ve cleared up the backlog, opened the code, and opened our platform to third-party services. And the Administration is going to keep taking petitions seriously.

A few months ago, we invited a group of petition-signers to the White House for a day of briefings from Senior Administration Officials, and to pick their brains. Here's what they had to say.

“OK,” you might be saying, “But what does adding my name to a petition actually lead to?” It’s a fair question.

Petitions that reach our signature threshold — and even some that fall short of it — end up in front of people at the highest levels of the Administration who look closely at the requests. There are meetings devoted to discussing the petitions and potential responses. And ultimately, whether we agree, concede, or disagree — the process of creating a response becomes part of how we think about these issues moving forward.

Consider the petition that online activist Sina Khanifar started in January of 2013, in the wake of a decision by the Library of Congress that ended an exemption to the Digital Millennium Copyright Act (DMCA). The decision made it illegal for consumers to unlock their cell phones — a process that allows a phone to be used on any compatible network.

That petition prompted the convening of more than a half-dozen agencies and offices’ senior officials. Those policy teams decided that they agreed with Sina and the 114,000 other Americans who added their names to the petition, and they moved forward with a plan to make it a reality.

In the weeks and months following the response we issued, those teams worked with the FCC and wireless carriers to move the issue forward. That captured national attention, and that helped motivate Congress to take action. Legislation to restore the DMCA exemption passed both Chambers unanimously, and was signed into law by the President last August.

That all started with a petition.

Petitions have provided concerned citizens with a way to get firsthand updates from Administration officials on actions being taken on the issues they care about, as was the case with petitions asking us to crack down on puppy mills — and to explore the use of body camera technology in policing communities across the country.

They've also given us the opportunity to have a little fun — a petition asking us to build a Star Wars-style Death Star provided an opportunity to highlight the important work happening at the International Space Station and across the Administration.

Finally, they’ve allowed us to directly connect with citizens for conversations with Administration officials. In a recent response to a petition asking the Administration to ban all LGBTQ+ conversion therapy, we announced for the first time that the President supports such a ban. Then we held a call with petition signers and Senior Advisor Valerie Jarrett to talk more about it.

Take a look back at other We the People responses over the years.

These are the sorts of interactions that a petition can lead to. And that’s why We the People will continue to grow and develop.

Because it’s one of the best ways we’ve found to make sure that the Administration remains accountable to the American people.

For the rest of the President’s time in office, we’ll to continue using the petitions that come in through We the People as an opportunity not just to answer questions posed by millions of Americans across the country, but to engage them in an ongoing conversation that opens up the policy-making process and provides every American who chooses to raise their voice with an opportunity to be heard.

All voices are welcome. 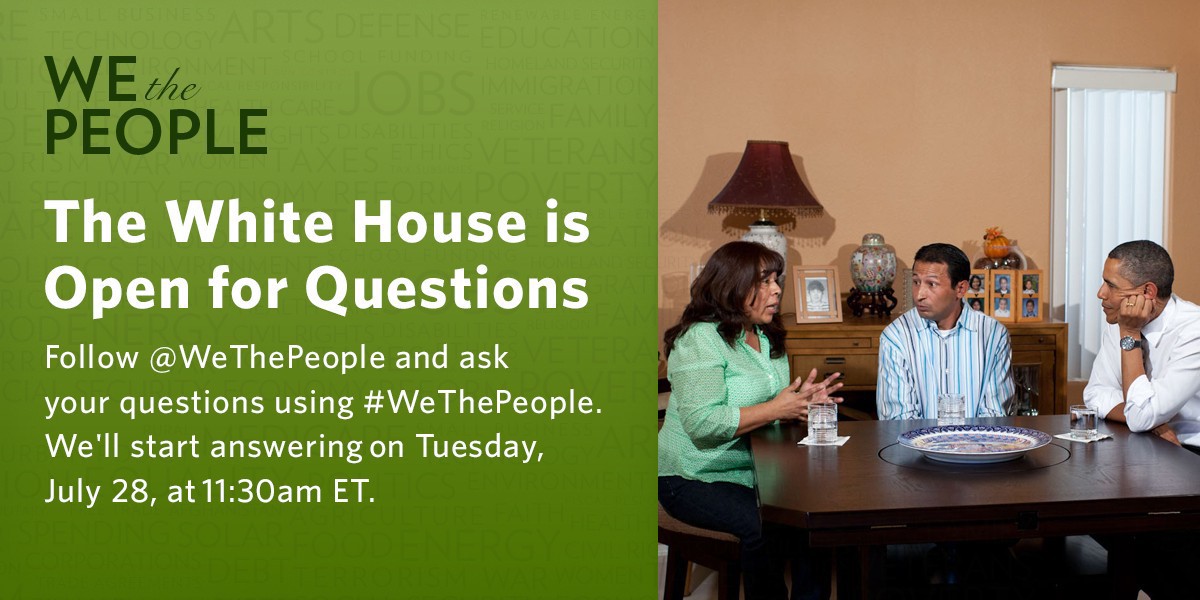 Click on a petition below to see the response we issued today: