July 30, 2015 at 10:15 AM ET by Valerie Jarrett
Twitter Facebook Email
Summary:
On July 30, President Obama released the National HIV/AIDS Strategy: Updated to 2020 at Morehouse School of Medicine in Atlanta, GA.

Today, the Obama Administration is releasing the National HIV/AIDS Strategy: Updated to 2020 (“Updated Strategy”). Since we released the nation’s first comprehensive HIV/AIDS strategy in 2010, we’ve made tremendous progress in the fight against HIV/AIDS. More people living with HIV know their status and are linked to care. We have better medications to treat the disease and better tools to prevent its transmission, like pre-exposure prophylaxis (“PrEP”) —a daily pill that can reduce a person’s risk of acquiring HIV by more than 90 percent when taken consistently.

Yet, despite this progress, there is still an HIV epidemic in the U.S. Not only has there been a recent HIV outbreak among injection drug users in Indiana, there has also been a national increase in the number of diagnoses of HIV infection among young gay and bisexual men. This disease is preventable and if a person is infected, there are ways to drastically minimize transmission to others. Too many people living with HIV are unaware of their status or are diagnosed late. Many people may not realize that while being HIV-positive may once have been a death sentence, they can now live long, healthy lives with HIV if they are diagnosed and treated.

There is a great discrepancy between the number of people who are diagnosed with HIV and those who are in care. Of the 1.2 million people living with HIV in the U.S., 87% (or about 1 million) of them know they have HIV, yet only 39% are engaged in care. This means that the majority of folks with HIV are not consistently getting the care they need to stay healthy and decrease their chances of transmitting HIV to others.

Groundbreaking research is unlocking new tools and methods to help keep people in care, prevent and treat the disease, and find a cure. A critical part of making the best use of current investments and maximizing impact is to focus attention and resources on persons living with HIV infection and those who are at greatest risk for acquisition. That’s why the Updated Strategy’s update calls for a focus on the right people, the right places, and the right practices…right now.

Our efforts under the Updated Strategy will prioritize the groups most affected by HIV: gay and bisexual men of all races/ethnicities (especially young Black gay and bisexual men), Black women and men, Latinos and Latinas, people who inject drugs, youth aged 13 to 24 years, and transgender women (particularly Black transgender women). We will also focus on the areas with the highest burden of disease, such as the Southern United States.

Learn about the five major changes to the strategy since 2010 here.

In 2015, we know what works, and to make a significant impact on the epidemic, the Updated Strategy calls for a focus on the following actions that will move us toward the 2020 goals:

Obtaining health care coverage is an important step to keep ourselves and our families healthy. More than 16 million people have taken this step since the passage of the Affordable Care Act, contributing to the largest reduction in the nation's uninsured rate in four decades. But we only realize the full value of that coverage when we use it to access the types of preventive services that will keep us healthy. The ACA provides access to precisely those services. Thanks to the ACA, most private plans, Medicare, and Medicaid coverage offer HIV testing without requiring a co-pay or deductible. PrEP is also covered by many insurance programs. Promoting testing, linkage to and staying in care, having the support services to achieve viral suppression, and using PrEP, are all parts of how the Updated Strategy encourages Americans be their healthiest selves.

Still, too many people lack either the health insurance coverage or the financial resources to obtain treatment and care. The Ryan White HIV/AIDS Program helps to fill that gap. It provides critical coverage completion services to nearly half of all Americans living with HIV and remains an essential part of our national response to HIV.

I encourage all Americans to take advantage of the preventive services available to them, get tested for HIV if they haven’t been, and consider using PrEP if they are at substantial risk of contracting the disease. With the release of our Updated Strategy, let’s all commit to double down on our efforts, and focus our HIV outreach on the right people, in the right places, with the right practices, right now. We’ve made great progress, but there’s more work to be done. The Updated Strategy will enable our nation to become a place where new HIV infections are rare, and where every affected person will have access to life-extending care, regardless of their circumstances, and live free from stigma and discrimination.

Here's an overview of everything you need to know about the Update Strategy. Click the graphic below to expand. 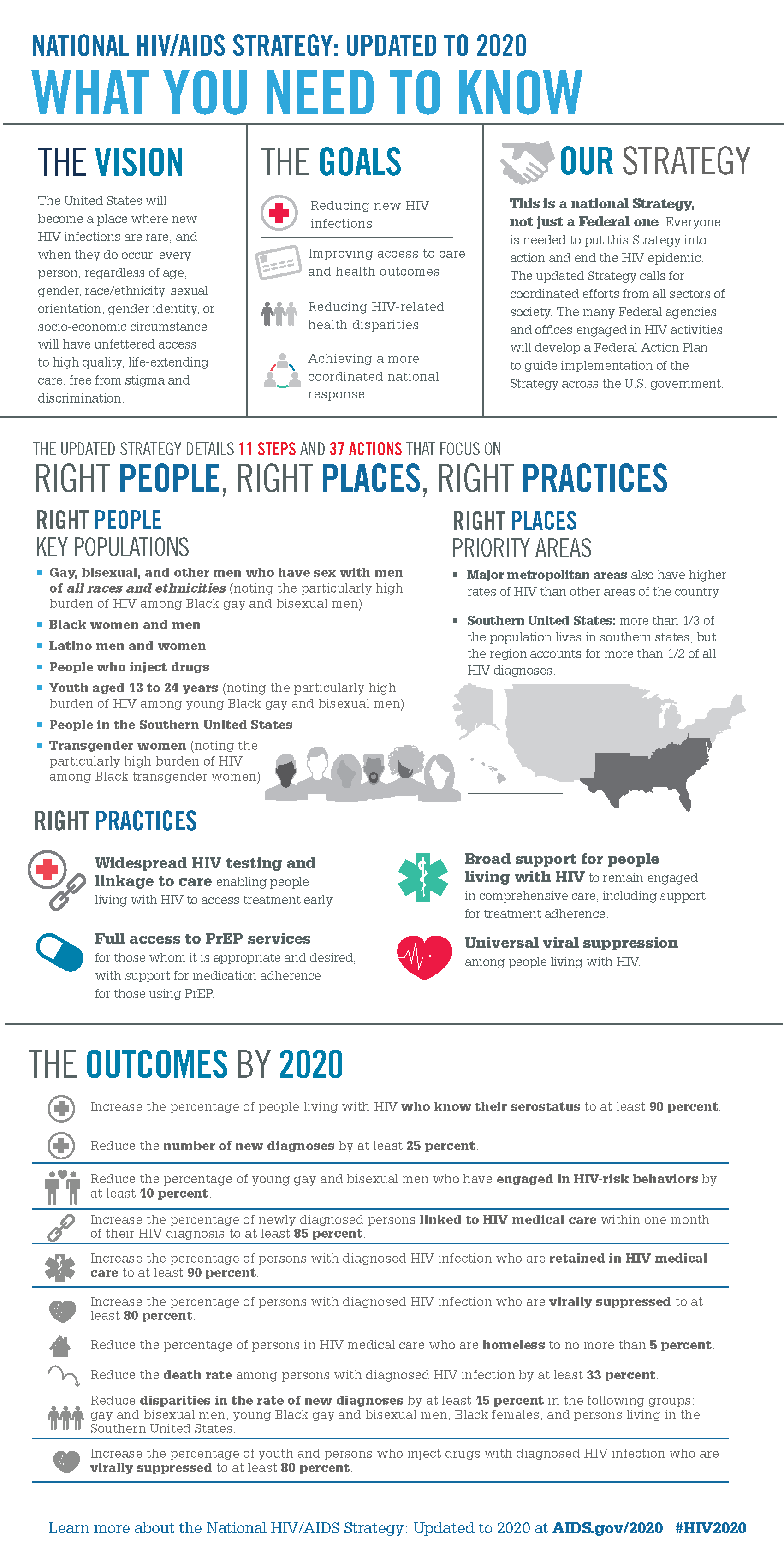