August 6, 2015 at 11:05 AM ET by Congressman John Lewis
Twitter Facebook Email
Summary:
Congressman John Lewis sends a message to the White House email list, reflecting on the passage of the Voting Rights Act of 1965 and highlighting the barriers to the vote that are still present today.

This morning, Congressman John Lewis sent the following message to the White House email list, reflecting on the passage of the Voting Rights Act of 1965 and highlighting the barriers to the vote that are still present today.

Tune in at 2 p.m. ET today as President Obama leads a conversation in honor of the 50th anniversary of the Voting Rights Act — followed by a discussion featuring Congressman John Lewis and Melissa Harris-Perry.

And if you didn't get the email, sign up for email updates here.

Every year, I head back to the birthplace of a new America -- Selma, Alabama -- where a determined struggle for voting rights transformed our democracy 50 years ago.

On March 7, 1965, Hosea Williams and I led a band of silent witnesses, 600 nonviolent crusaders, intending to march 50 miles to Montgomery -- Alabama's capital -- to demonstrate the need for voting rights in America.

At the foot of the bridge, we were met by Alabama state troopers who trampled peaceful protestors with horses and shot tear gas into the crowd. I was hit on the head with a nightstick and suffered a concussion on the bridge.

I thought that was going to be my last demonstration. I thought I might die that day. 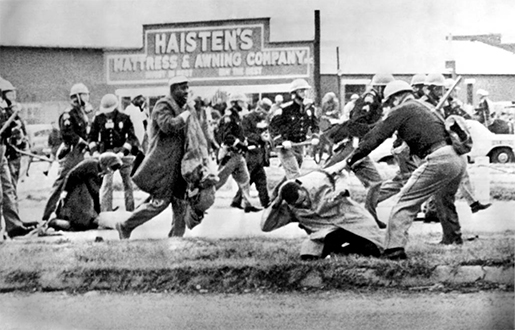 We knew the dangers that lay ahead, but we marched anyway hoping to usher in a more fair society -- a place where every American would be able to freely exercise their constitutional right to vote, and each of us would have an equal voice in the democratic process.

We knew that standing up for our rights could be a death warrant. But we felt it would be better to die than to live with injustice.

When President Lyndon Johnson signed the Voting Rights Act into law, it was a great day. The Act made the ballot box immediately more accessible to millions of Americans of every race, gender, region, economic status, and national origin. It has been called the most effective legislation of the last 50 years.

But just two years ago, the Supreme Court struck a blow at the heart of the Voting Rights Act, nullifying a key provision that had curbed discriminatory voting rules and statutes from becoming law. As soon as the Court's decision was announced, states began implementing restrictive voting laws.

While some states are changing laws to increase the number of Americans who are able to participate in our democracy, by increasing early voting days and making it easier for people to cast a ballot, far too many states are passing new laws that make it harder and more difficult to vote.

Early voting and voter registration drives have been restricted. Same-day voting has been eliminated in some cases. Strict photo identification laws have been adopted, and improper purges of the voting rolls are negating access to thousands, perhaps millions, who have voted for decades.

That's why people are still marching for this cause today. Even as we speak, the NAACP is leading a 40-day, 40-night march from Selma to Washington, D.C. in support of a number of issues, including the issue of voting rights.

As citizens, it is our duty to make sure that our political process remains open to every eligible voter, and that every citizen can freely participate in the democratic process.

And when it comes time to get out and vote -- we have to do so. The right to vote is the most powerful nonviolent, transformative tool we have in a democracy, and the least we can do is take full advantage of the opportunity to make our voices heard.

Today at 2 p.m. ET, I'm joining President Obama for an important conversation on protecting voting rights -- and I hope you'll join us. Tune in here.

Despite the challenges, I am still hopeful -- but we must remain determined. Democracy is not a state. It is an act, and each and every one of us, each generation, must do our part to help create a more perfect union.