#JonVoyage: Our 4 Top Moments from President Obama's Interviews on "The Daily Show with Jon Stewart"

August 6, 2015 at 8:45 PM ET by Molly Wolfe
Twitter Facebook Email
Summary:
In honor of Stewart's final episode of The Daily Show, we look back at our favorite moments from their interviews.

President Obama and Jon Stewart have chatted over the years on the Daily Show, about everything from electoral politics and foreign policy to the media and the Vice President's attire.

"The Daily Show with Jon Stewart" has become one of the most influential programs on television by offering honest, passionate analysis and satirical commentary of the news. Politicians, network executives, and everyday Americans tune in four times a week and esteem his segments for their thoughtful monologues, sharp correspondents, and well-timed celebrity guests.

Since 1999, Jon Stewart has tackled current events and changed the way we talk about the world around us. His episodes show incredible range of emotion — from hilariously referring to President Obama as “dude,” to his powerful, solemn monologue after the shooting in Charleston.

Tonight, Stewart will give his last performance on "The Daily Show." He and President Obama have shared the screen a total of seven times over the past 10 years, discussing the President's work as a Senator, on campaigns, and in the White House. Most recently, President Obama sat down with Stewart last month as part of the trailblazing final season.

Here are four of our favorite moments Jon Stewart has shared with President Obama over the years:

On if he felt pressure from the sudden increase in attention:

SENATOR OBAMA: It is true that I worry about the hype. The only person more overhyped than me is you.

STEWART: That’s about the best answer I think I’ve ever heard. 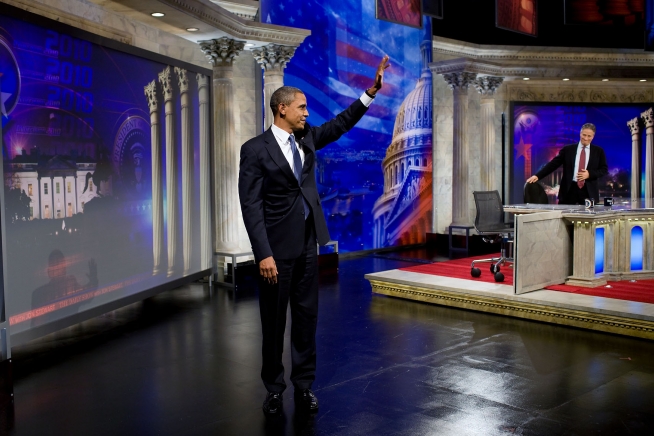 President Barack Obama waves to the audience after taping an interview for the Daily Show with Jon Stewart at the Harman Center for the Arts in Washington, D.C., Oct. 27. 2010. (Official White House Photo by Pete Souza)

On the strides his Administration had made in the first 18 months:

STEWART: Is the difficulty that you have here the distance between what you ran on and what you delivered? You ran with such, if I may, audacity ... yet legislatively it has felt timid at times.

PRESIDENT OBAMA: Jon, I love your show, but this is something where I have a profound disagreement with you. This is what most people would say is as significant a piece of legislation as we have seen in this country's history. What happens is, it gets discounted because the presumption is we didn't get 100 percent of what we wanted, we only get 90 percent of what we wanted -- so let's focus on the 10 percent we didn't get as opposed to the 90 percent we did. 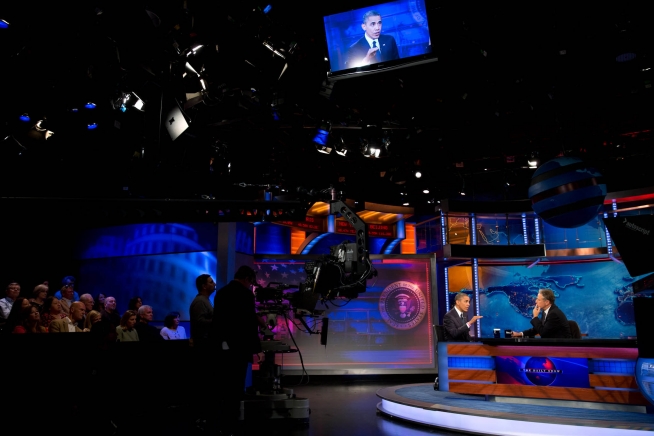 President Barack Obama is interviewed by Jon Stewart during a taping of “The Daily Show with Jon Stewart” at the Comedy Central Studios in New York, N.Y., Oct. 18, 2012. (Official White House Photo by Pete Souza)

STEWART: How many times a week does Biden show up in a wet bathing suit to a meeting? Just ballpark figure.

PRESIDENT OBAMA: I had to put out a presidential directive on that. We had to stop that.

STEWART: You’ve got to put towels down.

PRESIDENT OBAMA: I’ve got to say though, he looks pretty good. 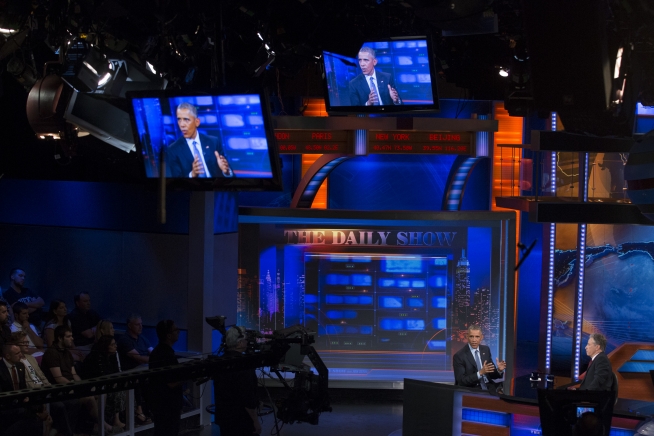 On a ticking clock:

STEWART: You also have senioritis, yes? What do you got, about a year?

PRESIDENT OBAMA: You know, I can’t believe that you’re leaving before me. In fact, I’m issuing a new executive order: that Jon Stewart cannot leave the show.

Watch the extended version of the President’s final interview on The Daily Show with Jon Stewart: