The White House Initiative on Asian Americans and Pacific Islanders (AAPIs) continued its outreach to communities across the country last month. One of the most important elements of the Initiative’s outreach is the Regional Network’s schedule of community events. Through these events, the Initiative is able to reach hundreds of AAPIs in their local communities in order to discuss federal programs and other opportunities. The Initiative facilitated a grant writing training program, conducted a mental health Twitterstorm, and held several notable community roundtables nationwide.  Here are a few highlights from last month.

On July 15, the Initiative’s Southwest Regional Network hosted a grant writing training in Los Angeles, California. Nearly 100 community leaders representing over 70 organizations from Southern California attended this training on the campus of California State University Los Angeles. AAPIs are by far the fastest growing population in the United States and Southern California has the largest number of AAPIs in the country according the 2010 Census. The training brought together community leaders who provide services to the AAPI communities in the areas of health access, job training, business development, housing, arts and entertainment, and others. In addition, leaders from faith-based institutions, academia, and local governments also attended this training.

On July 22, the Initiative hosted a Twitterstorm with the Substance Abuse and Mental Health Services Administration (SAMHSA) to spotlight AAPI mental health issues and resources during Minority Mental Health Month. With the hashtags #MMHM2015 and #AAPIMentalHealth, community members and federal partners shared important facts and figures, personal experiences, agency resources, and in-language educational materials. Over the span of one hour, 160 users engaged in the Twitterstorm, posted 330 times, and reached 927,181 users. Take a look at some of the tweets:

On July 23, more than 140 AAPI community members and federal agency representatives attended our Pacific Northwest Regional Network’s community roundtable in Portland, Oregon. Participants attended breakout sessions on environmental issues, healthcare, workplace protections, labor trafficking, law enforcement and immigration, and housing. Many community members expressed that they were impressed by the number of federal resources available to them, and that this was the first time they had attended an event of this kind.

Southcentral Regional Network Roundtable in Austin, Texas On July 25, the Southcentral Regional Network hosted its first community roundtable in Austin, Texas. The event was held in partnership with the City of Austin, the Asian American Resource Center, and Asian Family Support Services of Austin. Speakers from nine federal agencies highlighted their federal programs and services. The local Austin community and their Federal representatives engaged in a meaningful dialogue about their unmet needs and other issues affecting the community. Mayor Steve Adler, City of Austin, welcomed the attendees and discussed the importance of discussing Asian American issues.

Don’t miss our upcoming August events, including our first-ever New American Business Bootcamp to be held in Cleveland on August 20. Participants will learn about how to leverage federal, state, and city level government services to start or grow their businesses. This event is designed to address the needs of the new American community by offering language translation support to participants. 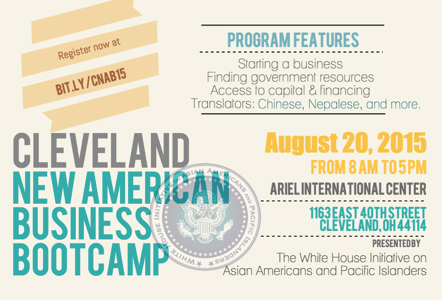 On August 26, the Southwest Regional Network will host a cybersecurity briefing for businesses owners in the southern California AAPI community. Representatives from law enforcement agencies will discuss the ways that businesses can safeguard themselves and their customers’ data in the digital age. Please visit the Initiative’s events page to register.

Mary Lam is Communications Advisor at the White House Initiative on Asian Americans and Pacific Islanders.