August 14, 2015 at 9:29 AM ET by Ken Meyer
Twitter Facebook Email
Summary:
Follow along here all day to get the latest as Secretary of State John Kerry travels to Cuba to re-open our embassy in Havana after more than 50 years.

On July 1, President Obama announced that the United States had agreed to formally re-establish diplomatic relations with the Republic of Cuba and re-open embassies in our respective countries.

The last time we had an embassy in Cuba was in January of 1961, when we severed diplomatic relations at the height of the Cold War.

Today, more than 54 years later, Secretary of State John Kerry is traveling to Havana to re-open our embassy and take a historic step forward in our efforts to normalize relations with the Cuban government and people.

My visit to Havana, the first by a U.S. Secretary of State in 70 years, comes nine months after President Obama announced a new approach to relations with Cuba. It is an approach based on the ties that bind our people, the interests shared by our governments, and the mutual respect that should characterize relations between two proud nationsóeven when our policies collide.
Secretary John Kerry

Watch as Secretary Kerry raises our flag over U.S. Embassy Havana once more, and stay tuned here all day for more updates from Cuba.

ìThe time is now to reach out to one another as two peoples who are no longer enemies...but neighbors.î óKerry #Cuba http://t.co/9YfpZYBNJN

"Matters of the Sea"

Listen to "Matters of the Sea," a poem written by Cuban-American poet Richard Blanco for today's ceremony. Blanco became the first Hispanic-American to read a poem at a presidential inauguration in 2013 for President Obama's second inauguration.

The View from Cuba

Follow the White House on Instagram today to catch a few snapshots of this historic day in Cuba. 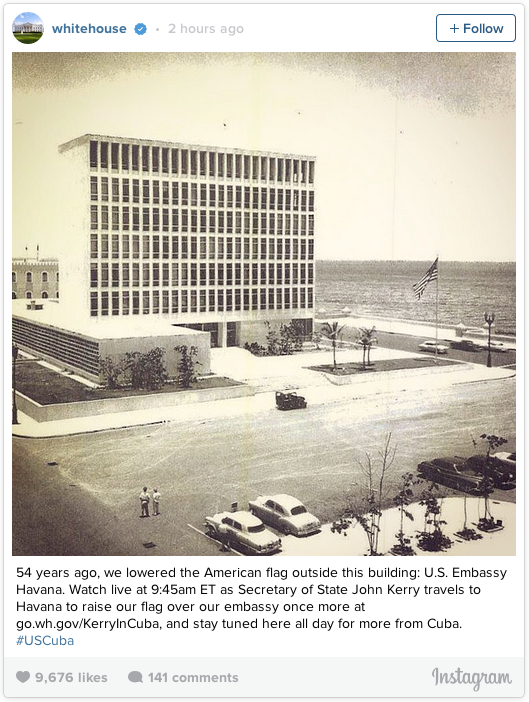 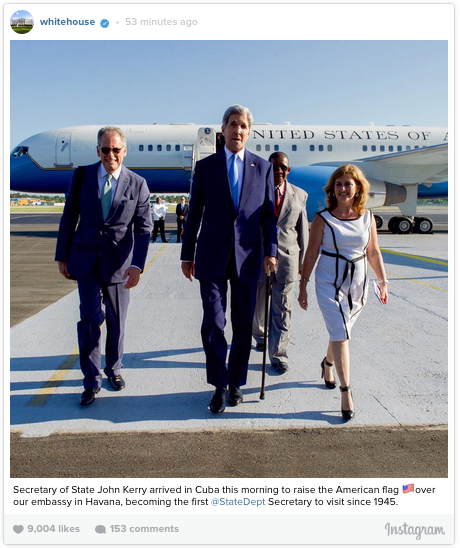 Check Out A Few Reactions

As US flag is raised over @USEmbCuba in Havana, here's a look at Cuba from @Space_Station: http://t.co/FL5Wo5B8BT pic.twitter.com/GJoi403FX5

Joining us in #Cuba, three Marines who lowered U.S. flag over the Embassy in 1961. Today they will raise it again. pic.twitter.com/JpHAvxwECs

Want a deeper dive into our new approach? You can learn more about the steps we're taking to improve U.S. and Cuban relations here: whitehouse.gov/cuba