Our economy has now added 8.0 million jobs over the past three years, a pace that has not been exceeded since 2000. And while the economy added jobs at a somewhat slower pace in August than in recent months, the unemployment rate fell to 5.1 percent—its lowest level since April 2008—and the labor force participation rate remained stable. Our businesses have now added 13.1 million jobs over 66 straight months, extending the longest streak on record. In addition, hourly earnings for American workers continued to rise. But there’s more work to do to ensure that America’s domestic momentum can continue to offset some of the headwinds from the global economy. That starts with avoiding self-inflicted wounds: Congress needs to pass a budget that reverses the sequester and avoids shutting down the government. But it’s also why the President is committed to pushing Congress to increase investments in infrastructure as part of a long-term transportation reauthorization, open new markets with expanded trade, and raise the minimum wage.

FIVE KEY POINTS ON THE LABOR MARKET IN AUGUST 2015

1. The private sector has added 13.1 million jobs over 66 straight months of job growth, extending the longest streak on record. Today we learned that private-sector employment rose by 140,000 in August, below the recent pace. Despite the monthly volatility in employment growth, long-term trends remain strong. The unemployment rate declined to 5.1 percent, its lowest level since early 2008, while the labor force participation rate remained stable. Wages continued to rise, with average hourly earnings for all private-sector workers up 2.2 percent over the past year. 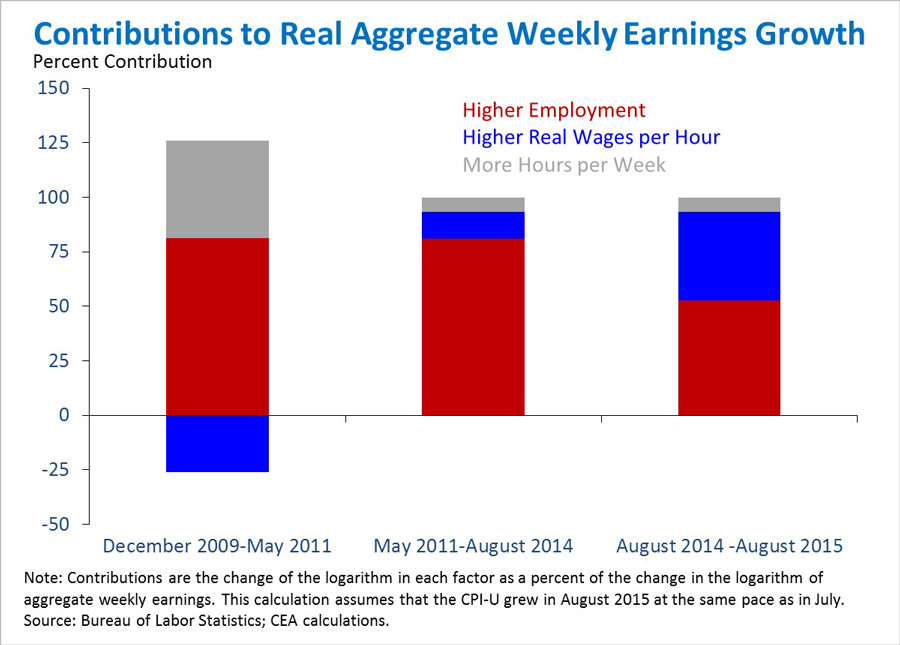 3. Across most industries, real weekly earnings for production and nonsupervisory workers have grown at a faster pace during this business cycle than the previous cycle. Real weekly earnings have grown faster since 2008—including both recession and recovery—than during the previous recession and recovery. Wage gains relative to the previous business cycle have been especially pronounced in the transportation, wholesale trade, retail trade, financial activities, and other services sectors, while mining & logging, education & health services, and leisure & hospitality are the only sectors to have underperformed. Relative employment trends are more diffuse, with some industries growing at a slower pace during this cycle (such as financial activities and construction, which grew quickly during the 2000s). Notably, manufacturing contracted during the 2000s but has since reversed that trend and outpaced the previous business cycle. 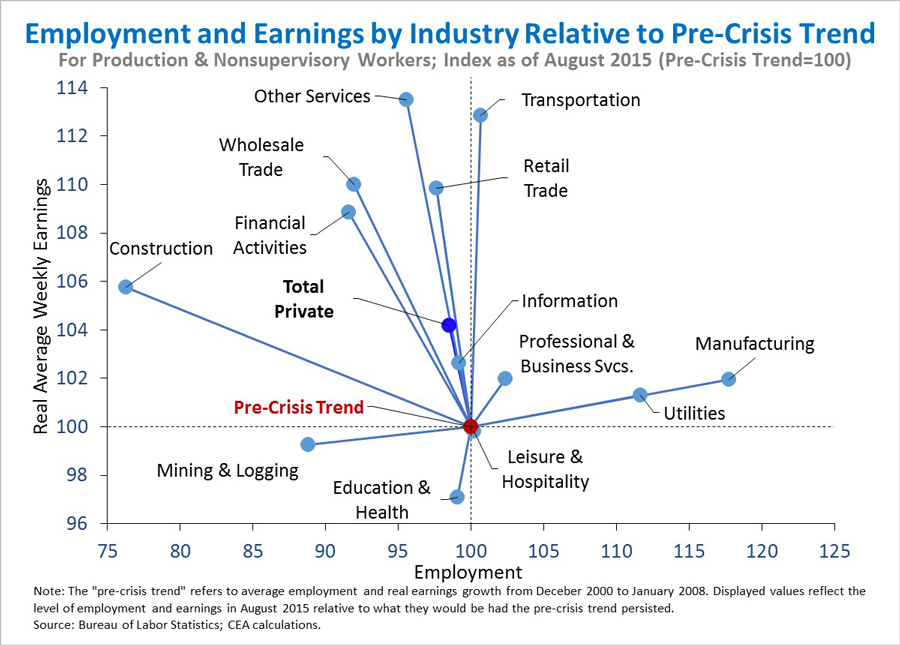 4. Summer seasonal fluctuations in auto manufacturing employment have moderated during this recovery as demand for autos continues to grow. Historically, large auto manufacturers tended to shed jobs in July and recoup many of them in August, as manufacturing plants typically shut down temporarily in July. But over this recovery, auto manufacturers have reduced these seasonal fluctuations. During the previous business cycle, July losses tended to exceed August gains, with auto manufacturing losing jobs on balance over the summer. But since the financial crisis, July losses and August gains have tended to balance one another. The summer turnover has decreased against a backdrop of continued strong growth in auto sales. Indeed, 2015 is on pace to be the strongest year for car and truck sales since 2001. Overall, the auto industry has added over 600,000 new jobs since Chrysler and General Motors emerged from bankruptcy in mid-2009—including solid growth in both the manufacturing and retail sectors. 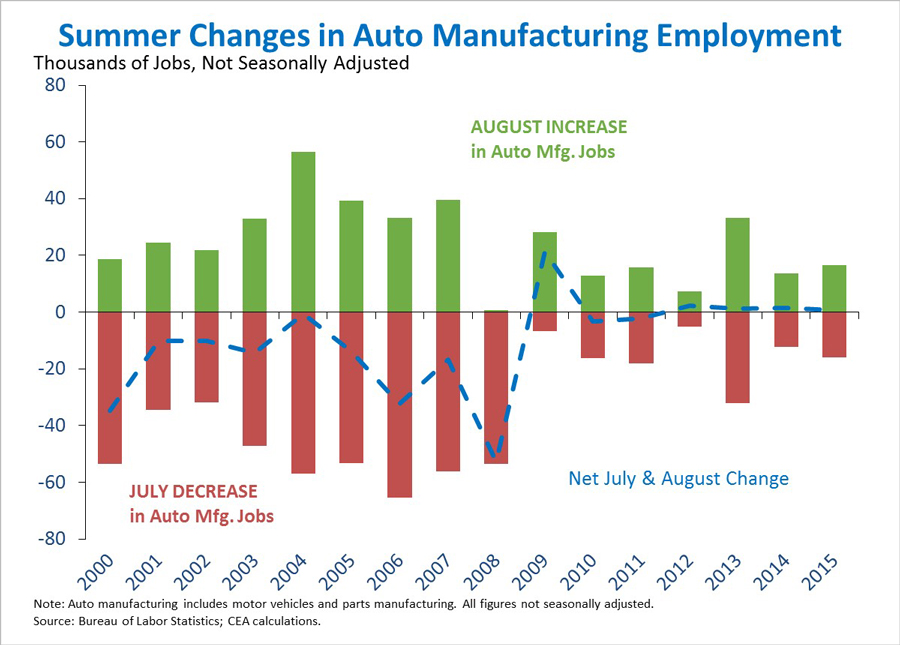 5. The distribution of job growth across industries in August generally followed recent trends, with this month’s slower growth affecting a number of industries. Despite the overall slower pace of job growth, above-average gains relative to the past year were seen in State and local government (+31,000), financial activities (+19,000), utilities (+2,000), Federal government (+2,000), and health care and social assistance (+56,000). August was an especially weak month in manufacturing (-17,000), information services (-7,000), professional and business services (+22,000, excluding temporary help), and other services (-4,000). Across the 17 industries shown below, the correlation between the most recent one-month percent change and the average percent change over the last twelve months rose to 0.92 from 0.68 last month, well above the average correlation over the past two years. 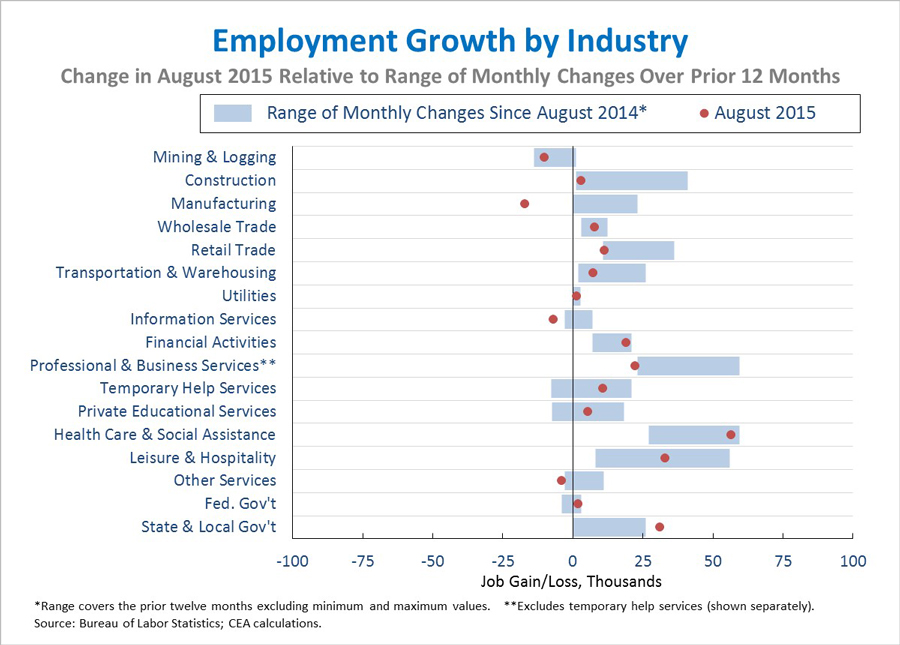