Since the beginning of his administration, the President has been focused on creating an economy that works for every American. The good news is, we’ve made significant progress. Under President Obama, our economy has added 13.1 million jobs over 66 straight months — the longest streak of job creation on record.  And more Americans are graduating from high school and college than ever before. But they are entering a job market that is different than even five or 10 years ago. The jobs of today — and the jobs are the future — higher-skill jobs that require more education and advanced skills.

That is why last July, the Administration — with the leadership of Vice President Biden — released a plan to expand the number of pathways for Americans to gain the skills they need to get better, higher-paying jobs and increase access to those pathways.  Since then, we have taken a number of steps towards that goal, including:

One of the core pillars of the job-driven training agenda is apprenticeship.  Yesterday, the President announced the largest-ever competitive investment into expanding our national apprenticeship system with $175M in American Apprenticeship grants to 46 winners across the country, which have collectively committed to adding 34,000 more apprentices through their efforts.

We did this because the data tells us that investing in apprenticeships leads to strong outcomes for hardworking Americans and businesses. More than 90% of apprentices are employed after completing their apprenticeship. The average starting salary for someone coming out of an apprenticeship program is over $50,000. And apprenticeships are good for employers too — for every dollar they invest in an apprentice, employers get back $1.47 in increased productivity, reduced waste, and greater innovation. 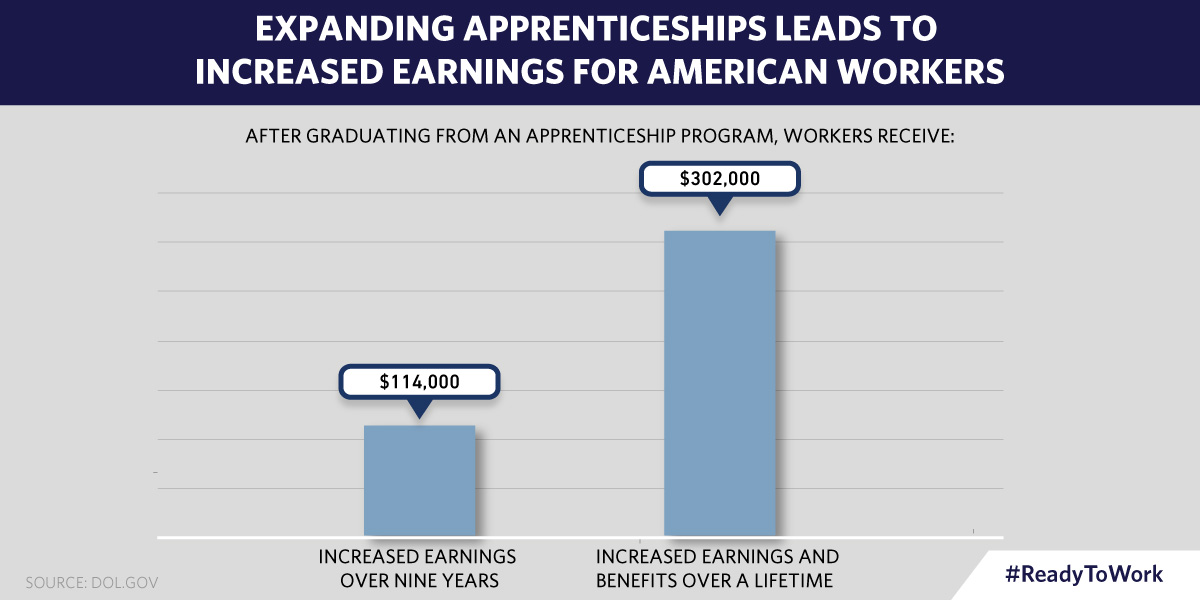 At the White House Summit on ApprenticeshipUSA earlier this week, Vice President Biden, Secretary of Labor Tom Perez, Secretary of Commerce Penny Pritzker, and myself met with over 140 employers, colleges, and labor organizations that have committed to expanding apprenticeship in the companies, industries and communities. And Vice President Biden challenged these leaders to do even more — including opening their doors to more apprentices later this fall during the National Week of Apprenticeship, launching November 2nd. 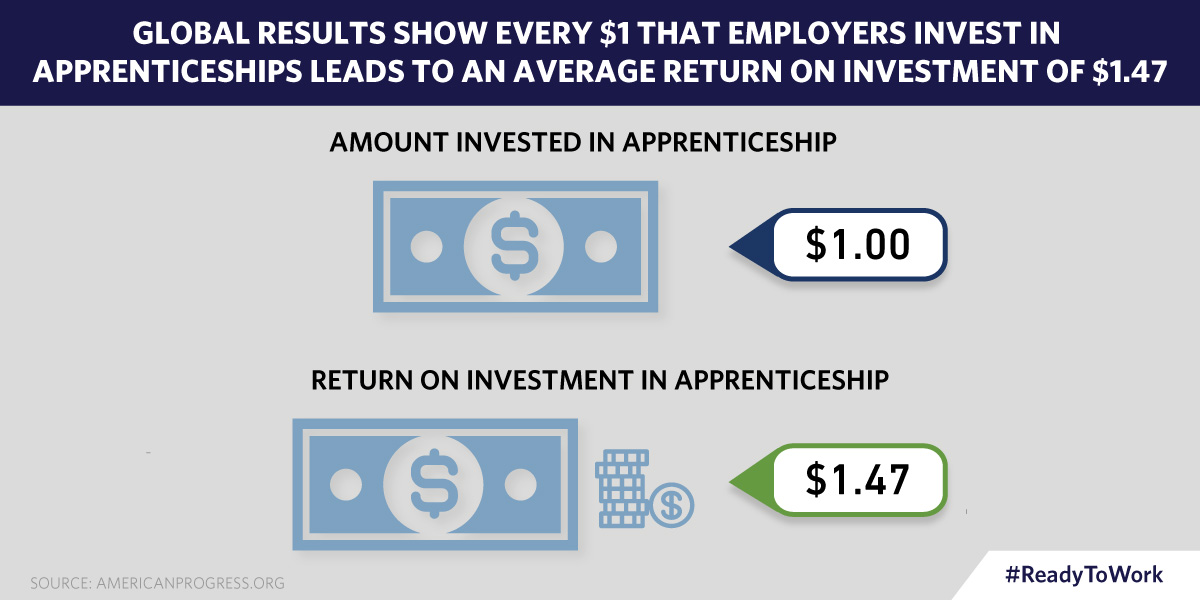 The efforts of these leaders build on the good results we’ve already achieved in increasing apprenticeships, with more than 55,000 new apprenticeships created over the last year and a half, the largest increase in nearly a decade.  And states and local leaders have stepped up, too — with 14 states taking on initiatives that have expanded apprenticeship by over 20% in their regions. 200 colleges are also stepping up to offer apprentices college credit for what they learn on the job, making apprenticeship a step forward to a career and further education. 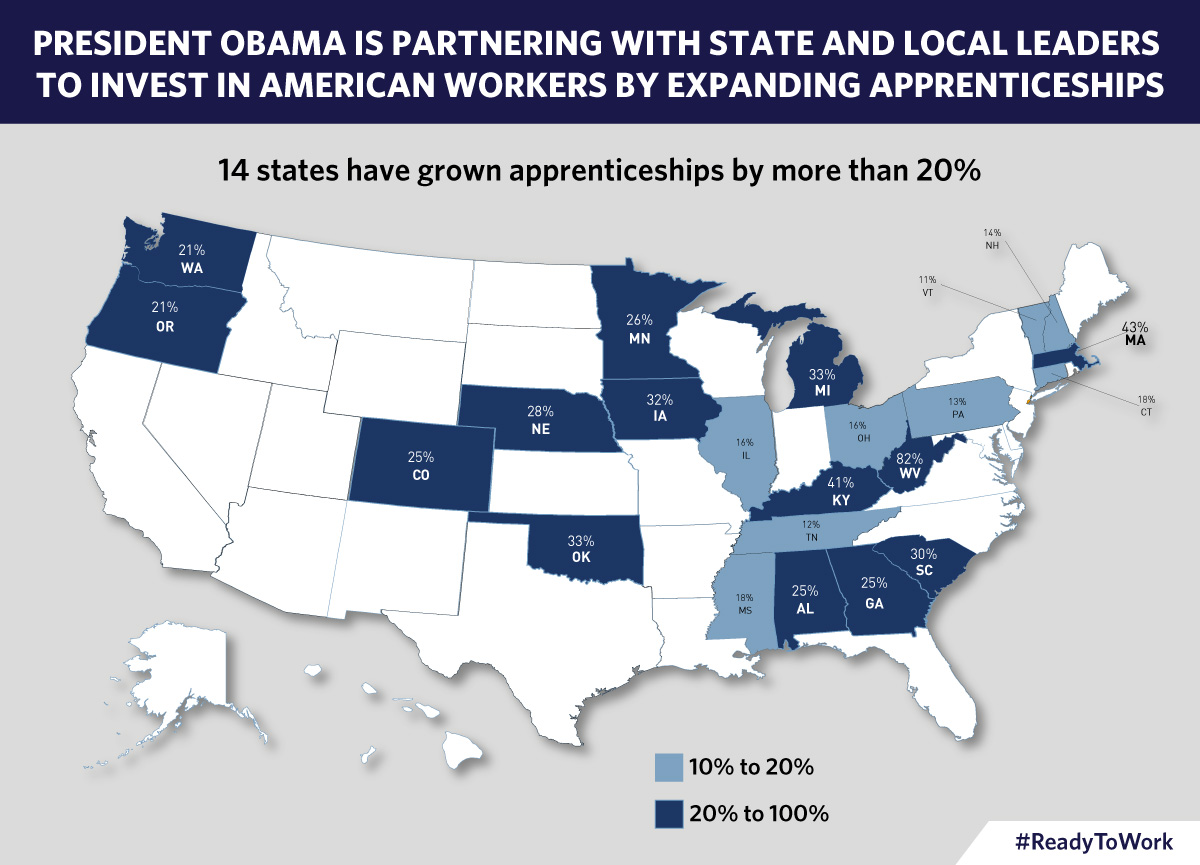 Employers who are leading on apprenticeship know that it’s good for their business. Here’s some of what we’ve heard from employers about how apprenticeships are impacting their companies:

Apprenticeship is a key component of UPS's commitment to Upskilling our employees by providing opportunities to grow and advance in our company. Training our Driver Service Providers also helps us grow our business.
Mike Johnson, the Chief Human Resource Officer of UPS

We began our journey in Detroit and have since replicated and expanded Registered Apprenticeship programs in Indiana and South Carolina, resulting in more than 1,500 participants in pharmacy technician and store manager trainee roles. For the past decade, we’ve seen the value for the company and our colleagues first hand.
David Casey, the Vice President for Workforce Strategies, CVS Health

Apprentice programs align academic classes, with the teamwork, problem solving, and adaptability of on the job training. Apprentices develop a thorough understanding of workplace dynamics in addition to training in current technology.
Ned McCulloch, the Global Issue Manager for Skills Development, IBM


To help even more employers recognize and document the value of apprenticeship to their business, Commerce Secretary Penny Pritzker announced at the White House Summit on ApprenticeshipUSA that the Joyce Foundation, JPMorgan Chase, and Annie E. Casey Foundation will launch an effort to compile cases studies from across industries on the return on investment of registered apprenticeship for U.S. employers.

With results for employers and workers alike, making the case for investment in apprenticeship is not hard — doing what we can to grow the number of apprenticeships is a no brainer. That’s why we’re going to continue to push on apprenticeships and on jobs-driven training overall, because they work. And because it is what we need to do to provide hardworking Americans with the skills and knowledge they need to advance their careers, get good jobs, and grow the economy.

Are you interested in learning more about the progress that’s been made on apprenticeships and the Administration’s broader job-driven training agenda? Learn more.