Seven years ago, Lehman Brothers filed for bankruptcy, setting in motion the worst financial crisis since the Great Depression. In fact, the onset of the Great Recession was more severe across a wide range of measures than the Depression itself—including substantially larger losses in wealth, a significantly larger contraction in global trade, and a comparable reduction in employment and private demand. In these ways the economy in late 2008 looked like it could have been on track for an outcome comparable to the Great Depression.

But an aggressive public policy response from a wide range of actors promoted aggregate demand and helped rescue the financial system. Over the course of just a few months after taking office, President Obama worked to shore up the U.S. financial system, rescue the auto industry, and pass a Recovery Act and more than a dozen subsequent fiscal measures that provided vital support to families and businesses. Since the crisis, the President has taken continued steps—including Wall Street reform—to strengthen our economy and protect against future downturns.

This decisive policy response helped the economy return to growth only six months after the President took office and made the United States among the first advanced economies to recover its pre-crisis output per capita. Today, those economic indicators that had collapsed in early 2009 have surged above pre-crisis levels and continue to improve:​

While more work remains to be done, this record is a testament not only to the bold public policy choices that helped avoid a second Great Depression but also to the resilience of the American people.

1. In the first year of the Great Recession, $13 trillion in household wealth disappeared—about 19 percent of total wealth, five times the loss rate in the onset of the Great Depression. But by late 2009, household wealth began to rebound, and is now more than 30 percent above 2008 levels. At the corresponding time in the Depression, wealth was still 30 percent below 1929 levels. 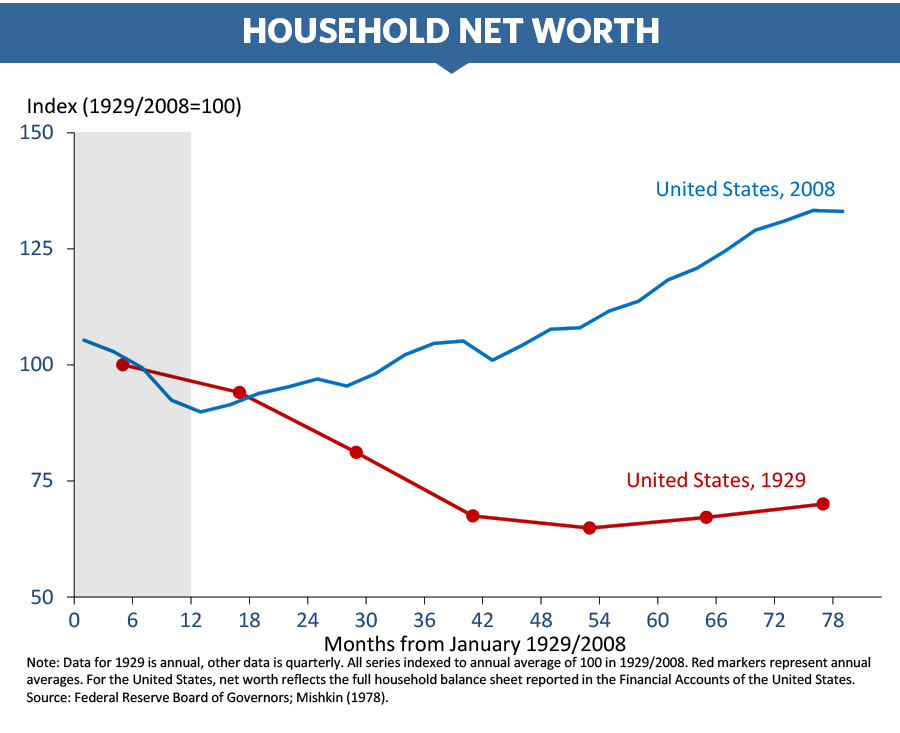 2. Housing prices fell faster between 2008 and 2009 than between 1929 and 1930. But they have since recovered, while losses in the Depression era persisted for years. Along with stock market valuations (which have also recovered much stronger than in 1929), housing values are a major component of household wealth. 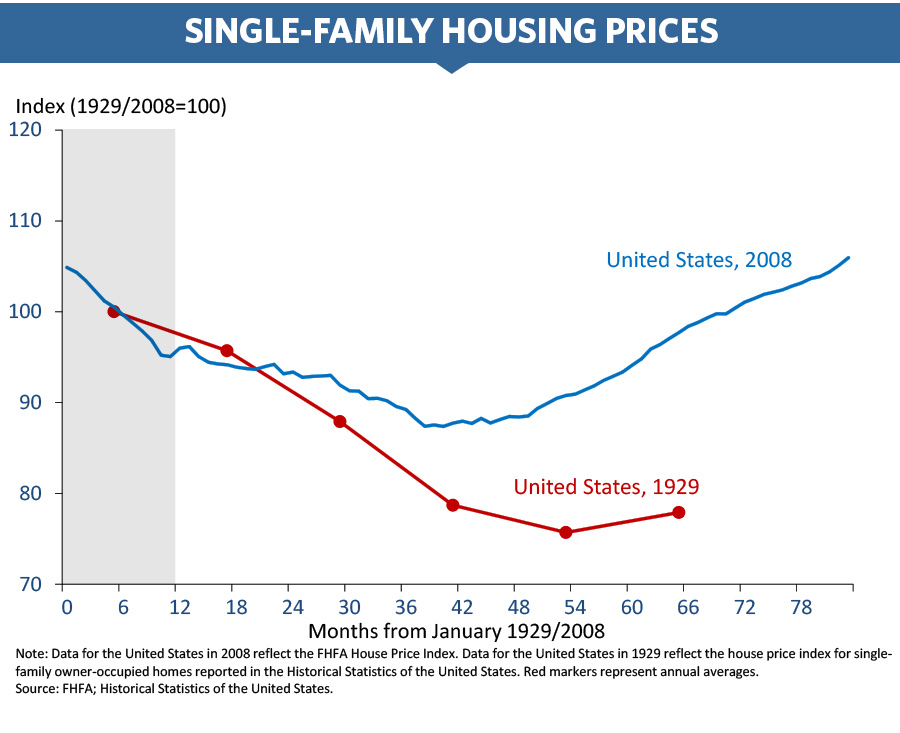 3. Our economy was shedding jobs at the start of the Great Recession at about the same pace as in the Great Depression. Our economy was adding jobs again by early 2010, while the pace of job losses only accelerated in the 1930s. Indeed, our robust employment growth has cut the unemployment rate nearly in half, from a peak of 10 percent to 5.1 percent today. The recent surge of job growth—8 million new jobs over the past three years—has not been exceeded since 2000. 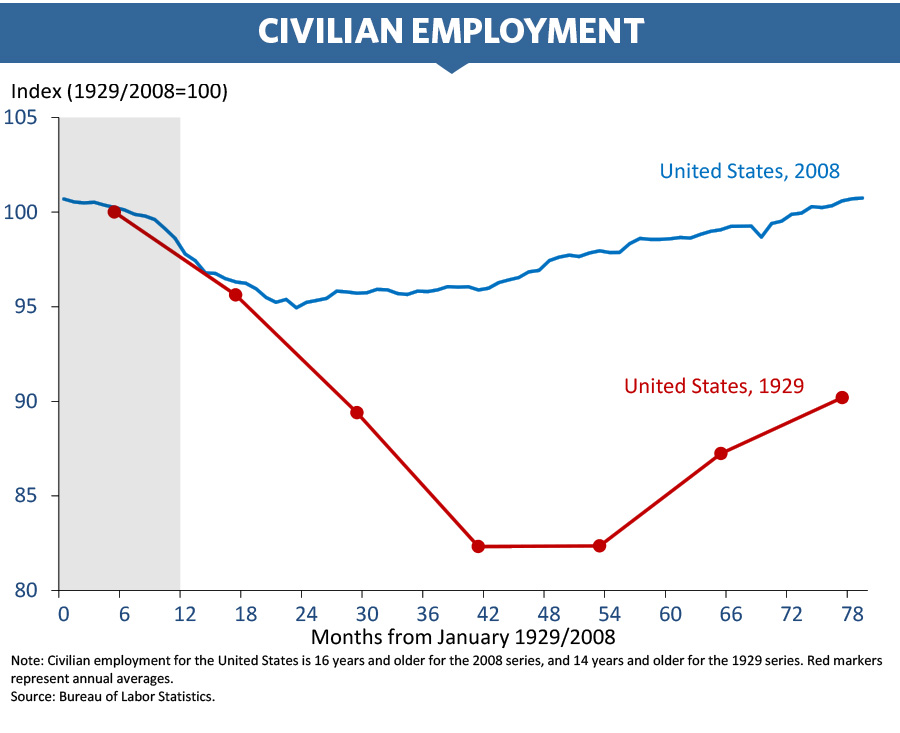 4. Private domestic final purchases (a combination of the largest and most stable components of GDP) contracted as sharply at the start of the Great Recession as during the start of the Great Depression. But while economic output continued to contract for years into the 1930s, our economy returned to growth in 2009, as both personal consumption and business investment started to grow again. 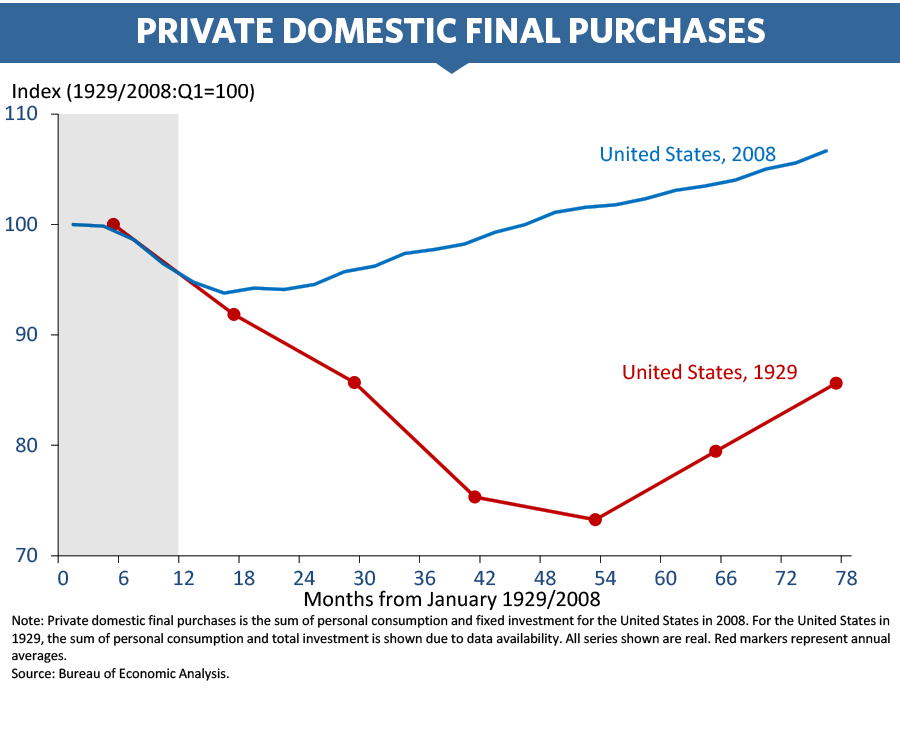 5. Global trade suffered a much more drastic fall between 2008 and 2009 than during the first year of the Depression. But as the U.S. economy returned to growth faster, so too did global trade, which is well above pre-crisis levels today. 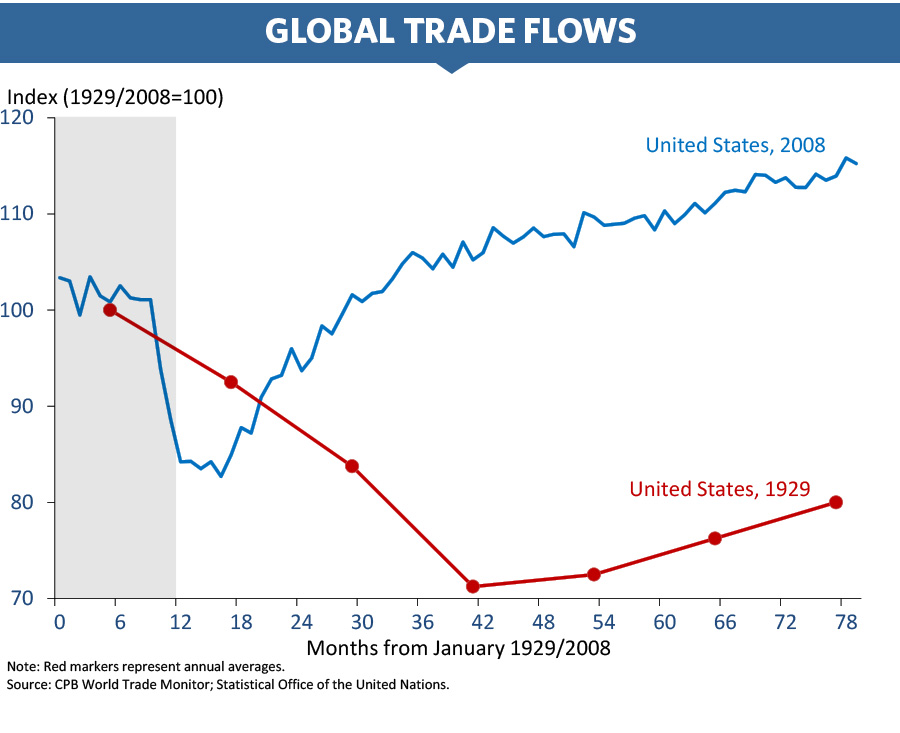