September 15, 2015 at 5:07 PM ET by Melissa Rogers
Twitter Facebook Email
Summary:
Educators and students from around the world were invited to attend the President's Interfaith and Community Service Campus Challenge Gathering on September 9-11, 2015. 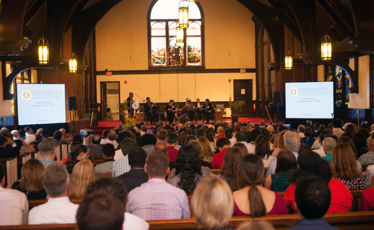 One of President Obama’s first acts was to establish the Advisory Council on Faith-based and Neighborhood Partnerships. Acting on a recommendation by this council, President Obama established the Interfaith and Community Service Campus Challenge to build bridges of understanding across our differences, especially among rising leaders, and to serve our neighbors. Interfaith service involves people from different religious and non-religious backgrounds tackling community challenges together – for example, Protestants and Catholics, Hindus and Jews, and Muslims and non-believers building a Habitat for Humanity house together. Interfaith service impacts specific community challenges, while building social capital and civility.

We were pleased to kick off the Fifth Annual President's Interfaith and Community Service Campus Challenge last week at Howard University. We have been delighted to watch as the President’s Challenge has resonated with leaders in higher education. In some schools, programs were already under way and gathered momentum because of the challenge. Other schools launched new interfaith service programs in response to the challenge. Actions like these have resulted in opportunities for millions of students and the betterment of countless communities.

The challenge has not been restricted to one model of higher education. Instead it has flourished in a variety of settings including large research universities, four-year colleges, tribal colleges, career colleges, and historically black universities. Each institution provides a unique perspective on what it means to have an interfaith commitment to campus.

Prompted by American schools’ embrace of the Campus Challenge, this year we proposed to think about ways in which institutions of higher learning around the world might benefit from sharing ideas, experiences, and practices of interfaith community service. In early 2015, meetings were held in Los Angeles, Chicago, and New York City with Campus Challenge participants to discuss possibilities for global engagement. One result of these discussions is that educators and students from around the world were invited to attend the Fifth Annual President’s Interfaith and Community Service Campus Challenge Gathering at Howard University on September 9 -11, 2015. The response was overwhelming, with people coming from 24 countries.

We’d like to thank those who worked so hard to make this initiative successful, including the Department of Education and its Center for Faith-based and Neighborhood Partnerships, the U.S. Agency for International Development and its Center for Faith-based and Community Initiatives, the Department of State and its Office of Religion and Global Affairs and Bureau of Educational and Cultural Affairs, and the Corporation for National & Community Service. We'd also like to thank the Howard University community for their generosity and hospitality in hosting the gathering this year.

On behalf of the President, I congratulate all of the schools and leaders who participate in the Challenge. We look forward with anticipation as this initiative continues to expand.