The Economic Case for a Budget Deal That Lifts Sequestration

September 17, 2015 at 11:00 AM ET by Shaun Donovan
Twitter Facebook Email
Summary:
Yesterday, the President made the case that reaching a negotiated budget deal that reverses sequestration is critical to the Nation’s economy.

Yesterday, the President made the case to the Business Roundtable that reaching a negotiated budget deal that reverses harmful automatic spending cuts known as sequestration is critical to the Nation’s economy. Here are three charts that illustrate why.

1. We cannot afford a return to harmful austerity that would cost our economy jobs and growth. In 2013, Congress passed the “Murray-Ryan” Bipartisan Budget Act, which partially reversed sequestration for two years.  By shifting from austerity to investment, the Council of Economic Advisers estimated that the Act would account for the creation of 350,000 new jobs through the end of 2015—and today, we’ve just completed two years of nearly the fastest pace of job growth since 2000.

But in fiscal year 2016, which begins October 1, sequestration’s unsustainably low spending levels will be back in effect – unless Congress acts. That’s the opposite of what our economy needs. The non-partisan Congressional Budget Office estimates that fully reversing sequestration for 2016 and 2017 would add 500,000 jobs and increase GDP by 0.4 percent in 2016 alone. Particularly at a time of renewed global economic uncertainty, we simply cannot afford to leave half a million jobs on the table. 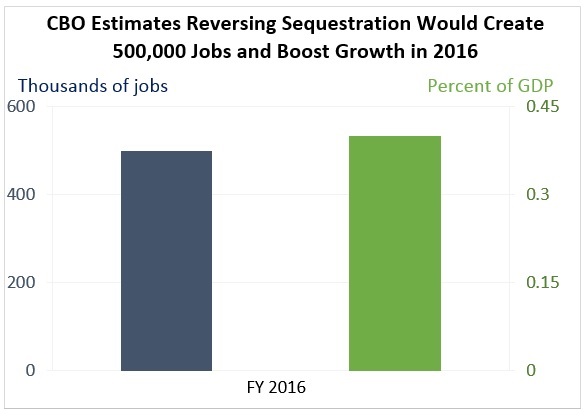 2. We cannot afford a return to harmful austerity that would block investments that boost long-term productivity and wages. The Republican budget for 2016 adheres to sequestration funding levels that dramatically shortchange the very investments that are most essential to long-term economic growth, including infrastructure, research and development, and training and education. For example:

3. We cannot afford a return to manufactured crises and constant “fiscal cliffs.” The President has been clear that he will not accept a budget that locks in sequestration going forward or fails to fix both defense and non-defense funding. It is equally clear that bills written under the Republican sequestration budget can’t even make it to the President’s desk – they lack the needed support in Congress. We also know that we can’t move the economy forward by going in reverse on protections for the environment, our health, or our workers. If folks want to have debate on that, let’s do it – but let’s not hold our annual funding bill hostage to unrelated policy riders.

Thus, the simple reality is that the only path forward on the budget is a bipartisan agreement. The only question is how many manufactured crises and fiscal cliffs Congressional Republicans will create before they come to the table to negotiate.

Several years ago, when Congressional Republicans forced fiscal crisis after fiscal crisis, the costs to our economy were clear. Consumer and business confidence fell sharply, directly slowing personal consumption and business investment—the most important components of economic output.  So brinksmanship isn’t just distressing, it directly slows our economy. This fiscal policy uncertainty cost 900,000 jobs, according to a Macroeconomic Advisers estimate. Conversely, the turn away from manufactured crises since 2013 helped contribute to accelerating job growth and a stronger recovery. 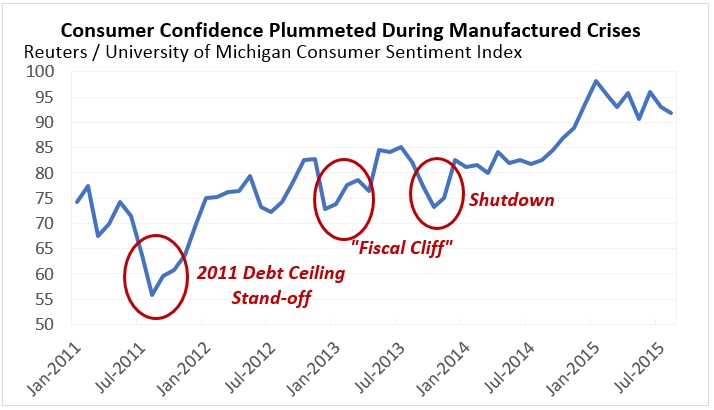 There is no need for uncertainty and manufactured crises when the outlines of a commonsense, bipartisan budget agreement are clear. Eight months ago, the President put forward a Budget that laid out a plan for reversing sequestration and investing in economic and national security priorities, while also reducing the deficit. Prominent Republicans have also endorsed balanced sequestration relief, and in June, 49 Republican Senators voted for a National Defense Authorization Act that included a provision supporting “equal defense and non-defense [sequestration] relief” paid for through “targeted changes in mandatory and discretionary categories and revenues.”

Rather than take us back to manufactured crises and unnecessary austerity, Republican leadership should accept the commonsense, bipartisan principle of reversing sequestration for defense and non-defense equally and come to the table quickly to work with Democrats in Congress on a 2016 budget that can become law – one that lifts sequestration, is free of partisan ideological riders, and allows investments that will boost our long-term economic growth.

Shaun Donovan is the Director of the Office of Management and Budget.