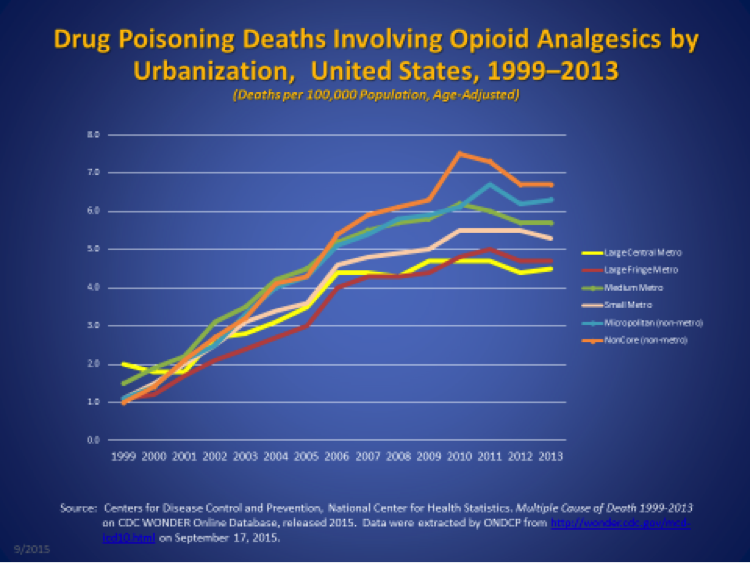 Prescription opioid and heroin-related overdoses have had devastating effects on rural families and communities across the country. According to the CDC, people in rural communities are more likely to overdose on prescription pain medications than people in cities, and the rate of opioid-related overdose deaths in nonmetro counties is 45 percent higher than in metro counties. Over the course of just nine months, one rural Kentucky county of less than 12,000 people experienced nine deaths by overdose involving prescription pain medications.

The most recent data show that overdose from prescription opioids is leveling off. But with the dramatic rise in heroin-related overdoses, we know the opioid crisis is far from over.

Addressing the opioid overdose epidemic is a top priority for the Administration, and the President’s Fiscal Year 2016 Budget includes $133 million in new funding for prevention and treatment initiatives. In addition, HHS recently announced $100 million in new available funding to Community Health Centers to expand substance use disorder services, with a focus on medication-assisted treatment for opioid use disorder.

And just yesterday, Health and Human Services (HHS) Secretary Sylvia Burwell is announced $1.8 million to support rural communities in reducing morbidity and mortality related to opioid overdoses. The Rural Opioid Overdose Reversal (ROOR) Grant Program will support 18 recipients, representing 13 states, with the purchase and placement of naloxone (a drug that reverses symptoms of a drug overdose), and training for its use by licensed healthcare professionals and emergency responders in rural areas. The grants will also promote local partnerships to coordinate care, with an emphasis on referring those with an opioid use disorder to appropriate substance use disorder treatment centers.

Yesterday’s announcement supports “Rural Impact,” a cross-agency effort led by the White House Rural Council to combat poverty and improve upward mobility in high-need rural and tribal places. As noted in a recent White House report on rural child poverty, nonmetro areas often lag behind cities in availability of critical services, educational opportunities, and job choices. This year, the White House Rural Council and partner agencies have made a series of announcements aimed at increasing access to key programs and services, including healthcare, nutrition assistance, and early childhood education.