The economy added jobs in September at a pace below that seen earlier in the year, as slowing growth abroad and global financial turmoil have weighed on economic activity. Overall, however, the unemployment rate remains at its lowest level since early 2008 and the private sector has added 13.2 million jobs over 67 straight months of job growth—the longest streak on record. Given the increased uncertainty around the world, it is imperative that the United States not further exacerbate that uncertainty with unnecessary brinksmanship and austerity. Instead, we must take steps to continue the domestic momentum that the U.S. economy has enjoyed in the last several years. That includes passing a budget that reverses the sequester and makes critical investments that help our economy continue to grow, reauthorizing the Ex-Im Bank so that our businesses can compete on a level-playing field abroad, and increasing investments in infrastructure.

FIVE KEY POINTS ON THE LABOR MARKET IN SEPTEMBER 2015

1. Today we learned that private-sector employment rose by 118,000 in September, below the pace observed earlier in the year. However, September was the 67th straight month of private sector job growth, extending the longest streak on record. The unemployment rate held steady at 5.1 percent, its lowest level since early 2008, while the labor force participation rate decreased. Wages were largely unchanged over the month, with nominal average hourly earnings for all private-sector workers up 2.2 percent over the past year. Payroll employment growth in July and August were revised downward. 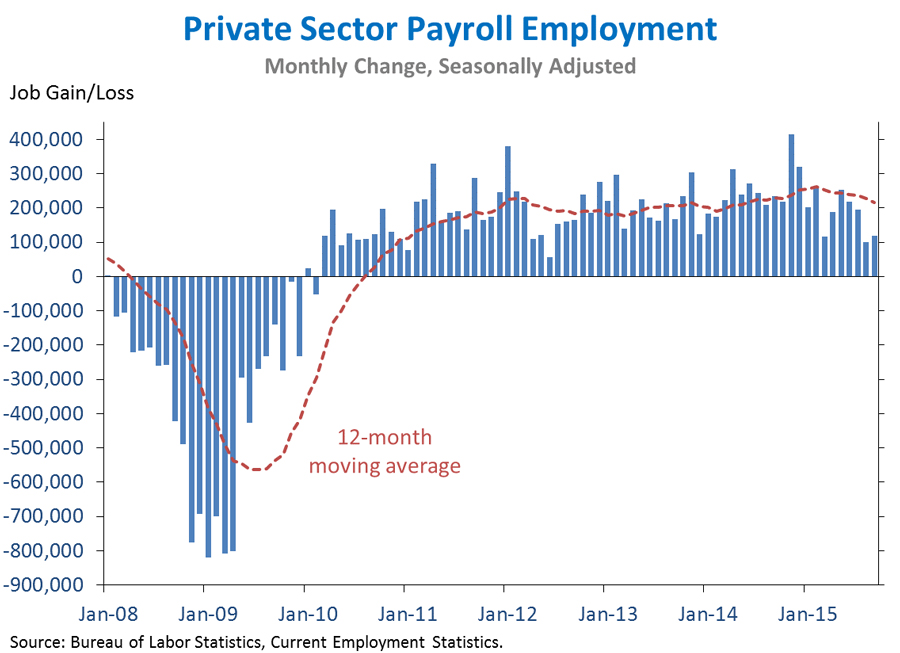 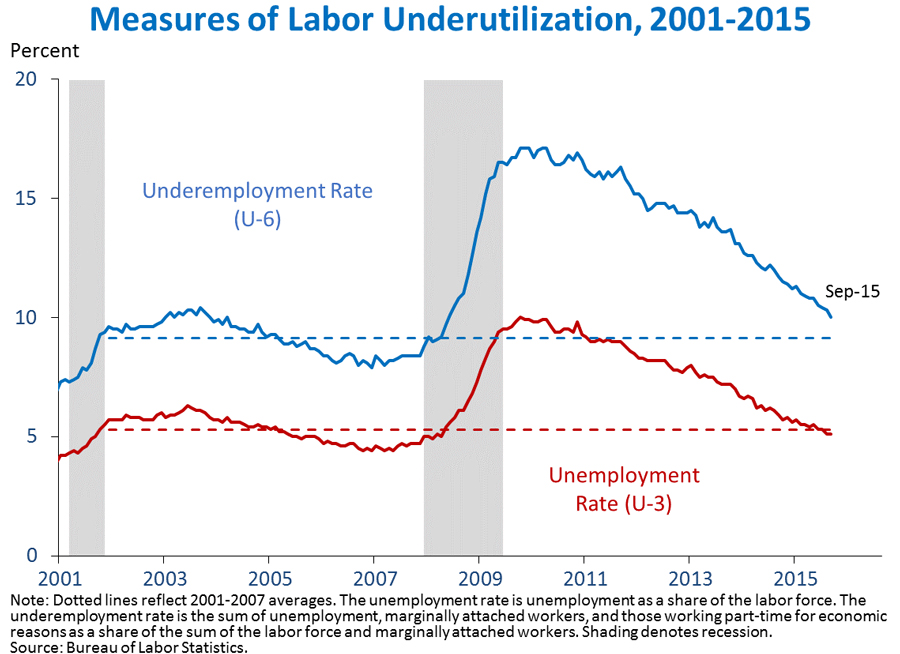 3. The rise in employment since early 2010 is more than fully accounted for by the increase in full-time employment, with part-time employment holding steady. The economy has added 11 million full-time jobs since February 2010, according to a separate survey of households that measures full-time and part-time status. Part-time employment has fallen slightly over this period. While 75 percent of part-time workers do so for family, health, and other reasons, the fraction of the labor force working part-time for economic reasons declined in September. This shift drove the reduction in the underemployment rate to its lowest level since May 2008. 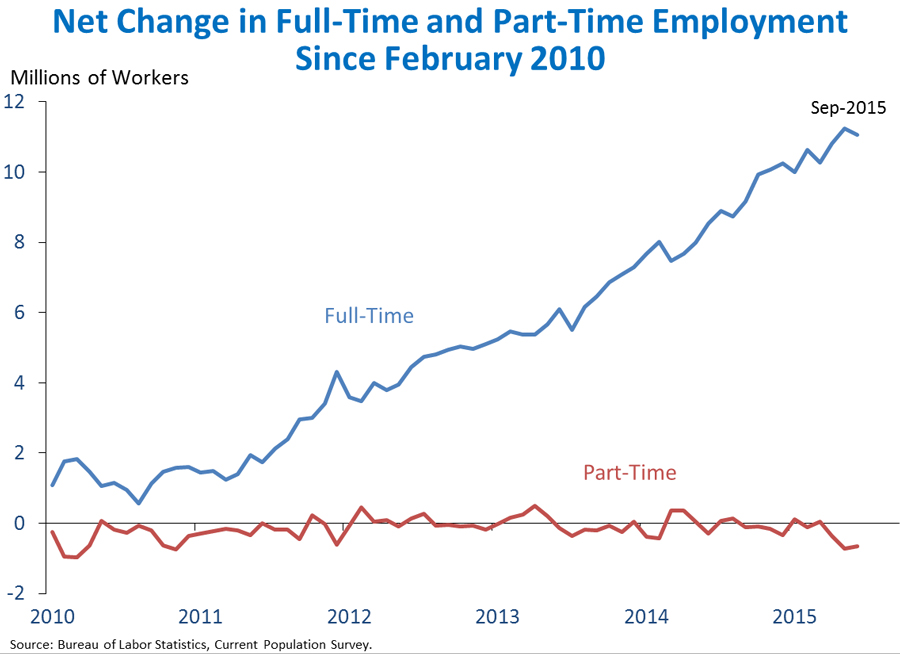 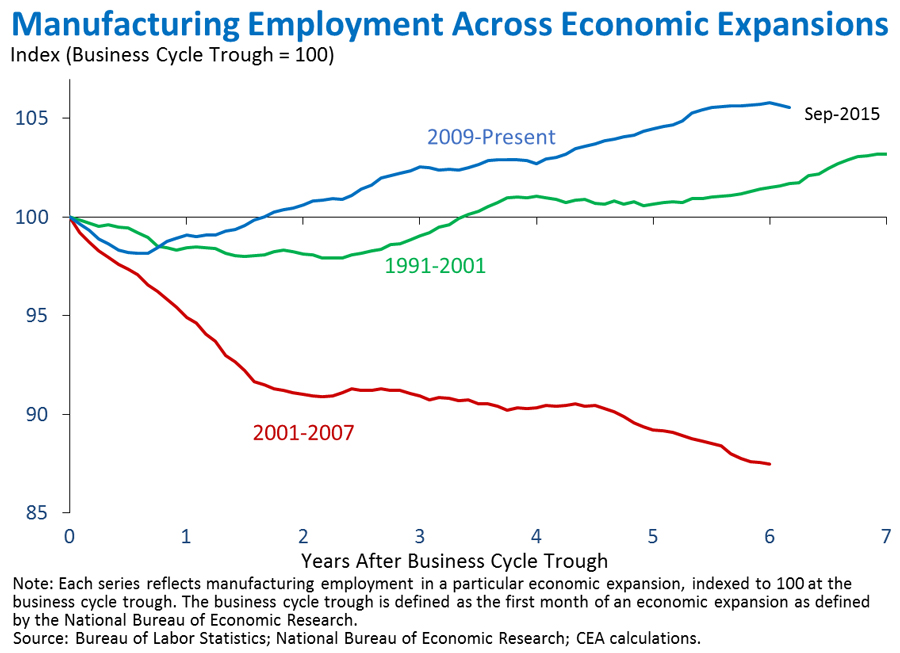 5. The distribution of job growth across industries in September generally followed recent trends, with this month’s slower growth affecting a number of industries. Despite the overall pace of job growth, above-average gains relative to the past year were seen in information services (+12,000) and State and local government (+26,000). September was an especially weak month in wholesale trade (-4,000), utilities (-1,000), and financial activities (unchanged). Across the 17 industries shown below, the correlation between the most recent one-month percent change and the average percent change over the last twelve months remained essentially unchanged at 0.94. 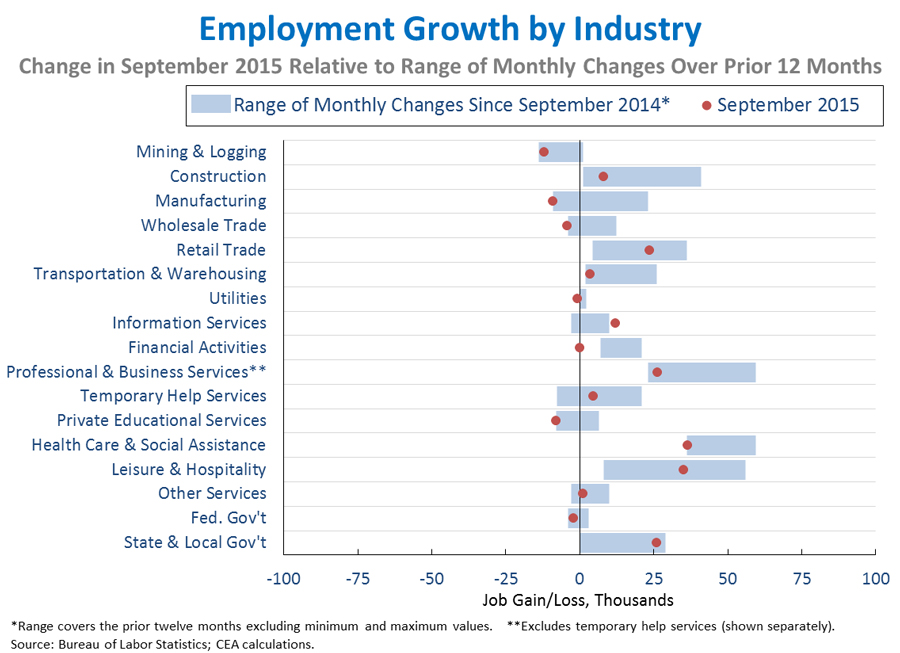