Celebrating the 50th Anniversary of the Immigration and Nationality Act

October 5, 2015 at 5:08 PM ET by Cecilia Muñoz
Twitter Facebook Email
Summary:
Today, the White House held a special naturalization ceremony to commemorate the 50th Anniversary of the Immigration and Nationality Act of 1965 (INA).

Fifty years ago, on October 3rd, President Lyndon B. Johnson signed into law the Immigration and Nationality Act of 1965 (INA). This reform to our immigration system marked a significant and much-needed change in our immigration policies ending a discriminatory quota system and prohibiting national origin discrimination.  It was part of a series of landmark civil rights laws enacted in 1965, including the Voting Rights Act and the Civil Rights Act.

As President Obama stated, “The Republicans and Democrats who came together to pass the INA were driven by a desire to expand opportunity for all, and to live up to our heritage as a nation of immigrants.” With the INA’s passage, our nation opened its doors to immigrants from all corners of the world.

Today, the White House held a special naturalization ceremony to commemorate the 50th Anniversary of the INA.  At the ceremony, we welcomed fourteen new Americans that hailed from thirteen different countries around the globe.  Homeland Security Deputy Secretary Alejandro Mayorkas and U.S. Citizenship and Immigration Services Director Leon Rodriguez presided over the ceremony, and Pulitzer Prize winning author and historian Taylor Branch shared remarks about the historic change that the INA brought as a piece of civil rights legislation. As Mr. Branch remarked, “Over the past fifty years, our openness to applicants from all nations has transformed the face of the United States literally and figuratively.” 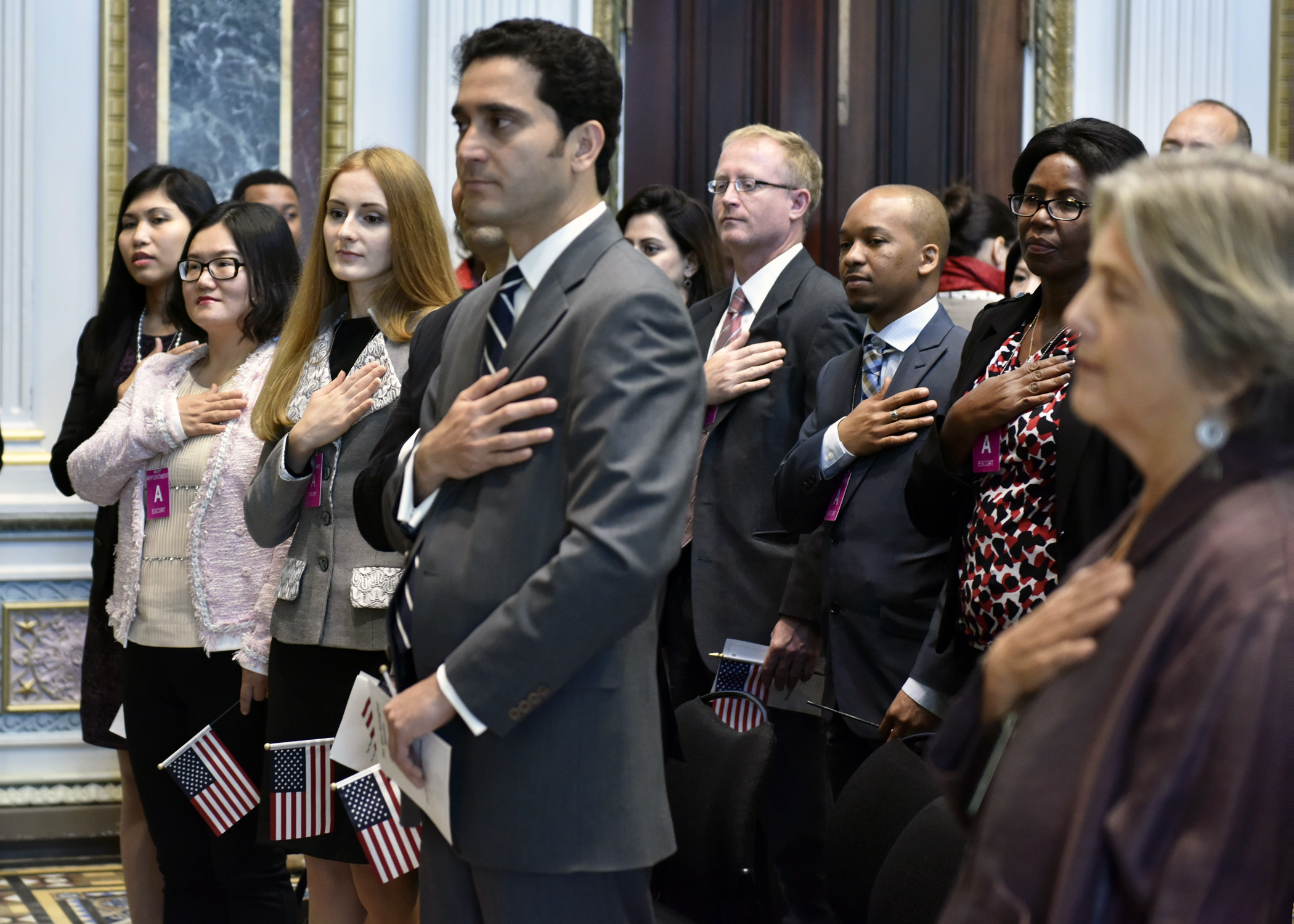 The new Americans naturalized today are symbolic of these changes. They included entrepreneurs, doctors, nurses, and teachers, and so much more. They came to the U.S. from China, Pakistan, Morocco, the Philippines, and Ethiopia—to name a few. They have such rich and diverse experiences and histories.

But, there is one thing that unites them all today—their desire to be American citizens and their commitment to our country, our values, and our ideals. As one of them said, “It means a lot to me to live in a country where everybody is respected and treated equally.” That is one of the founding principles upon which our nation was built—and creating equality in our immigration system was one of the key components of the law that we celebrate today.

It is also why the White House has prioritized the need to welcome immigrants and refugees into our local communities through the Building Welcoming Communities Campaign. Over 41.3 million foreign-born residents live in the United States and are contributing to the vitality of our country and their communities, including over 3 million refugees who have settled here since 1975.

Just weeks ago, President Obama also released a video message as we announced the “Stand Stronger” Citizenship Awareness Campaign. The rights and responsibilities of citizenship cannot be underscored enough. Of the 13.3 million lawful permanent residents living in the United States, approximately 8.8 million are eligible to apply for citizenship. We applaud the 14 individuals that became citizens today for the strength, courage, and patience it took to get to this point. And now, they can continue on their journey and add their unique contributions to our nation’s history as U.S. citizens.

Last week, the Administration announced that we will be increasing the number of refugees we admit from around the world on annual basis to 100,000 in the next two years. We will continue to do everything we can to provide humanitarian assistance to help meet the urgent needs of those affected by conflict, and to resettle and successfully integrate refugees. You can get involved and help those displaced or impacted by the conflict in Syria and across the globe too.

Many of the individuals who became citizens today were able to do so because of the changes that the INA brought to our country. It prioritized family reunification, working to ensure that family members could join their U.S. citizens and lawful permanent residents at a quicker pace. It prioritized skills-based immigration in an effort to invite those with unique skills and talents to our nation so that we could continue to be a global economic engine.

Read the President’s statement on the 50th Anniversary of the INA and learn more about the White House Task Force on New Americans.