Since their first documented arrival in Morro Bay, California on October 18, 1587, Filipino Americans have made remarkable contributions to every sector of American life.  On Friday, October 2, we were proud to host the first-ever White House Celebration of Filipino American History Month, in order to commemorate the rich history, heritage, and culture that bond the Filipino American community with the larger mosaic of the American immigrant story.  Dressed in Filipiniana, or traditional Filipino attire, more than 175 Filipino American leaders from almost 25 states joined us for this historic occasion. 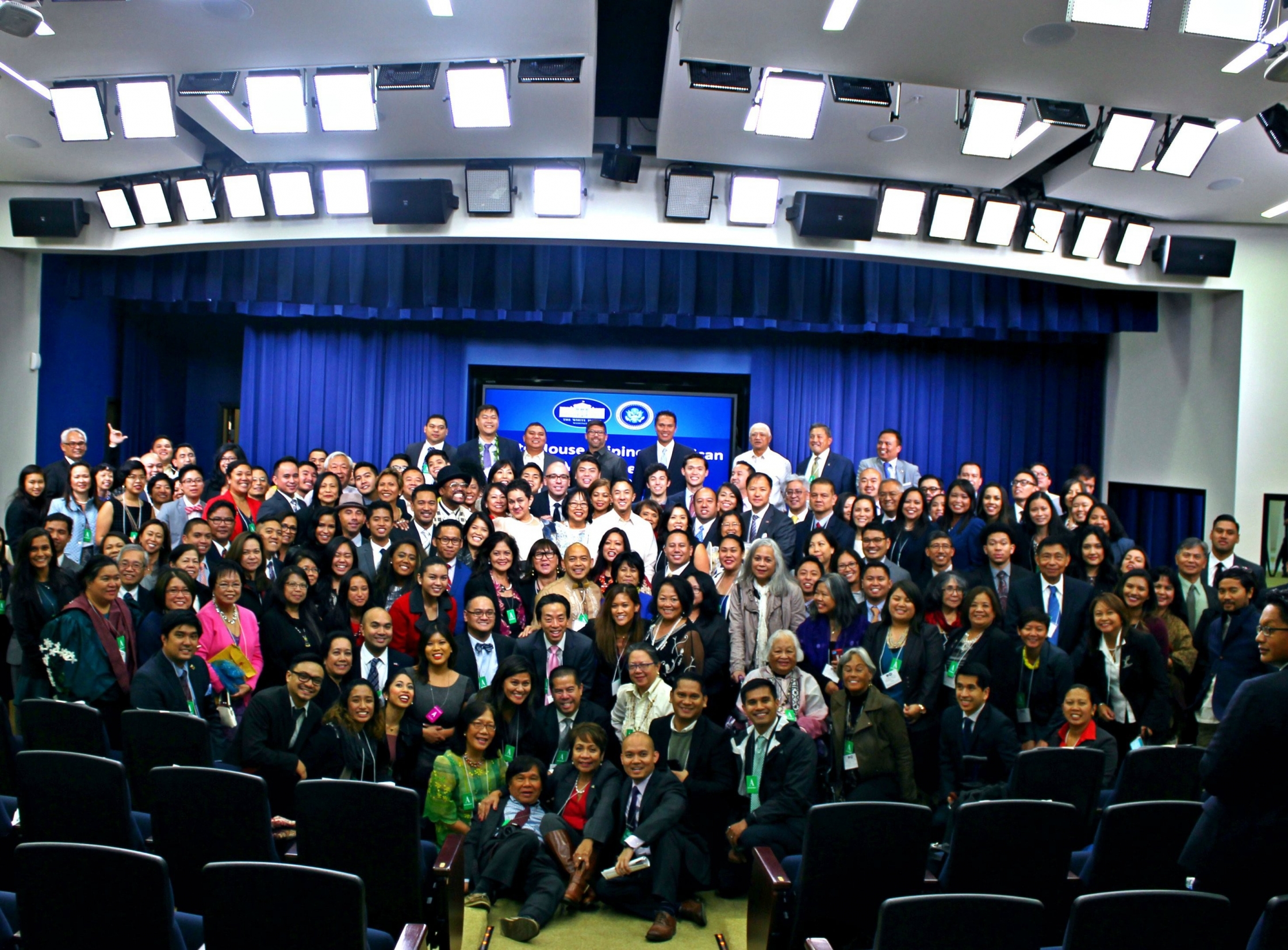 View photos of the celebration here.

The Celebration kicked off with remarks by Jason Tengco, Deputy Director of the White House Initiative on Asian Americans and Pacific Islanders (AAPIs), and Mel Orpilla, President of the Filipino American National Historical Society (FANHS), who highlighted FANHS’ efforts in 1991 to recognize October as Filipino American History Month for the first time.  Jason then surprised Mel and FANHS Executive Director Dorothy Cordova with a special message from President Obama:

This year’s keynote speaker, Nani Coloretti, who serves as the Deputy Secretary of the U.S. Department of Housing and Urban Development and is the highest-ranking Filipino American in the Obama Administration, highlighted her upbringing in Hawaii and the role that her family played throughout her personal and career journey.  The Celebration featured remarks by several other senior Administration officials, including Maria-Contreras Sweet, Administrator of the U.S. Small Business Administration (SBA); León Rodríguez, Director of U.S. Citizenship and Immigration Services (USCIS); and Dr. Vivek Murthy, Surgeon General of the United States.  Speakers highlighted federal resources for community members, including around small business, citizenship and immigration, and health and well-being.  USCIS Director Rodríguez also discussed the Department of Homeland Security’s announced efforts to create a parole program to allow certain family members of Filipino and Filipino-American World War II veterans to receive parole to come to the United States on a temporary basis.

Maraming salamat to the diversity of Filipino Americans who performed today @WhiteHouse celebration of #FAHM2015. pic.twitter.com/zerT17UNDa

Billy Dec, member of the President’s Advisory Commission on AAPIs, moderated a panel with Filipino American trailblazers, which included Cristeta Comerford, the first Filipino American White House Executive Chef; Apl.de.ap, Co-Founder of the Black Eyed Peas; Cassie, singer; Geena Rocero, model and founder of Gender Proud; Jo Koy, comedian; and Ronnie del Carmen, Co-Director of Pixar Animation Studios.  The speakers highlighted how they have blazed the trail in their respective fields, and recognized the role that their families – especially their mothers – played throughout their experiences.

From across the Pacific, spanning coast to coast, from the grape fields of Delano all the way to Hollywood and the White House Kitchen, Filipino Americans have and continue to shape the very fabric of this great nation.  This month, let us not only reflect on the hardships and sacrifices made by those who fought valiantly for our freedoms, but let us celebrate the historic contributions that Filipino Americans have made to make our nation a more perfect union.

Missed the event or want to relive it?  Watch the video, see event photos, and continue the conversation online using #WhiteHouseFAHM.

Billy Dec is a member of the President’s Advisory Commission on AAPIs.  Jason Tengco is the Deputy Director of the White House Initiative on AAPIs.