Deficit Reduced by Nearly Three-Fourths Since 2009

October 16, 2015 at 11:15 AM ET by Shaun Donovan
Twitter Facebook Email
Summary:
Yesterday, OMB and the Department of Treasury released the fiscal year 2015 budget results, which show significant and continued progress in reducing the deficit.

New figures that the Office of Management and Budget and the Department of Treasury released yesterday show significant and continued progress in reducing the deficit. The deficit fell to 2.5 percent as a share of the economy – or of the Gross Domestic Product (GDP) – in fiscal year (FY) 2015 according to the year-end budget results. That’s the lowest since 2007 and well below the average of the last 40 years.

The new numbers reaffirm the President’s vision: that we can invest in growth and opportunity to strengthen the middle class while also putting our Nation’s finances on a strong and sustainable path. In fact, the deficit has been reduced by nearly three-fourths as a share of the economy since 2009, representing the most rapid sustained deficit reduction since just after World War II. And, our economy is growing: businesses have created more than 13 million new jobs over the past five and a half years. 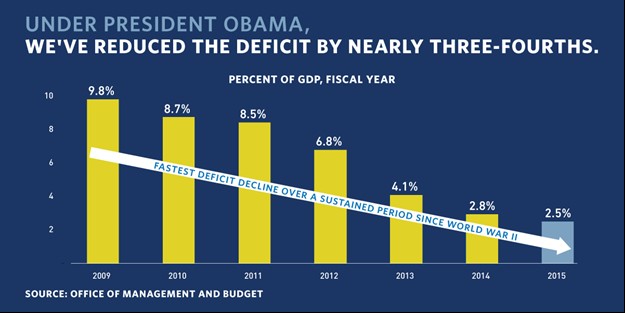 But, there’s still work to be done. We need to stay focused on strengthening our economy, which means passing a long-term budget that fully funds the government and reverses the harmful cuts known as sequestration to allow for critical investments in both our economic and national security.

That’s what the President proposed in his FY 2016 Budget. He laid out a plan for ending the harmful automatic spending cuts known as sequestration and investing in economic and national security priorities, while also continuing to make progress on deficit reduction. In fact, the President’s Budget holds deficits to below 3 percent of GDP and stabilizes debt as a share of the economy. It achieves this by paying for all new investments and obtaining $1.8 trillion in deficit reduction, primarily from health reforms that will help sustain the recent slow-down in health care cost growth, tax reforms that reduce inefficient high-income tax expenditures and close loopholes, and commonsense immigration reform.

The Administration remains committed to working with Congress to end sequestration and make the critical investments in our military readiness, infrastructure, schools, public health, and R&D that keep our economy on the cutting edge.