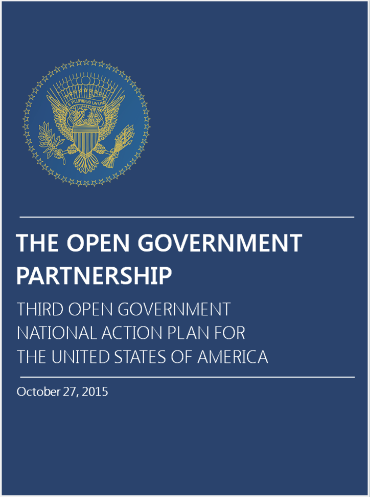 Today, the United States released our third Open Government National Action Plan, announcing more than 40 new or expanded initiatives to advance the President’s commitment to an open and citizen-centered government.

The release is part of our membership in the Open Government Partnership — launched by President Obama and seven other heads of state — which in just 4 years has grown from 8 to now 66 countries. Member countries and their civil society partners are all working to increase public integrity, enhance public access to information, improve management of public resources, and give the public a more active voice in government processes. As a member of the Open Government Partnership, the United States issues Open Government National Action Plans outlining ambitious commitments to advance open government every 2 years.

The release of this plan coincides with the Open Government Partnership Summit taking place this week in Mexico City, where more than 2,000 open government reformers from member governments and civil society organizations are gathering.

In the third Open Government National Action Plan, the Administration both broadens and deepens efforts to help government become more open and more citizen-centered. The plan includes new and impactful steps the Administration is taking to openly and collaboratively deliver government services and to support open government efforts across the country. These efforts prioritize a citizen-centric approach to government, including improved access to publicly available data to provide everyday Americans with the knowledge and tools necessary to make informed decisions.

One example is the College Scorecard, which shares data through application programming interfaces (APIs) to help students and families make informed choices about education. Open APIs help create an ecosystem around government data in which civil society can provide useful visual tools, making this data more accessible and commercial developers can enable even more value to be extracted to further empower students and their families. In addition to these newer approaches, the plan also highlights significant longstanding open government priorities such as access to information, fiscal transparency, and records management, and continues to push for greater progress in that work.

The plan also focuses on supporting implementation of the landmark 2030 Agenda for Sustainable Development, which sets out a vision and priorities for global development over the next 15 years and was adopted last month by 193 world leaders including President Obama. The plan includes commitments to harness open government and progress toward the Sustainable Development Goals (SDGs) both in the United States and globally, including in the areas of education, health, food security, climate resilience, science and innovation, justice and law enforcement. It also includes a commitment to take stock of existing U.S. government data that relates to the 17 SDGs, and to creating and using data to support progress toward the SDGs.

Some examples of open government efforts newly included in the plan: