The Bipartisan Budget Agreement: What You Need to Know

October 29, 2015 at 6:42 PM ET by Tanya Somanader
Twitter Facebook Email
Summary:
Congress passed a budget that will invest in America's middle class. Here's a look at what's in it.

Government shutdown brinksmanship, flirtation with debt defaults, devastating budget cuts -- for too long, the American people have had to deal with the consequences of a Congress that governs from crisis to crisis. The President has repeatedly called on Congress to pass a budget that boosts our economic and national security, rather than threatening it with harmful spending cuts known as sequestration.

This week, Congressional leaders met that key test, passing a bipartisan budget agreement that provides relief from sequester cuts and reflects values that will help build a strong middle class.

This agreement is a reminder that Washington can still choose to help, rather than hinder, America’s progress, and I look forward to signing it into law as soon as it reaches my desk.
President Obama

So what exactly is in the budget agreement? How will it impact families, communities, and our economy?

Here’s a brief rundown of what you need to know about the bipartisan budget agreement and what it means for you:

Failing to reach an agreement would mean locking in deep budget cuts, known as sequestration. By providing relief from sequestration, the two-year agreement will lead to 340,000 additional American jobs in 2016 alone. 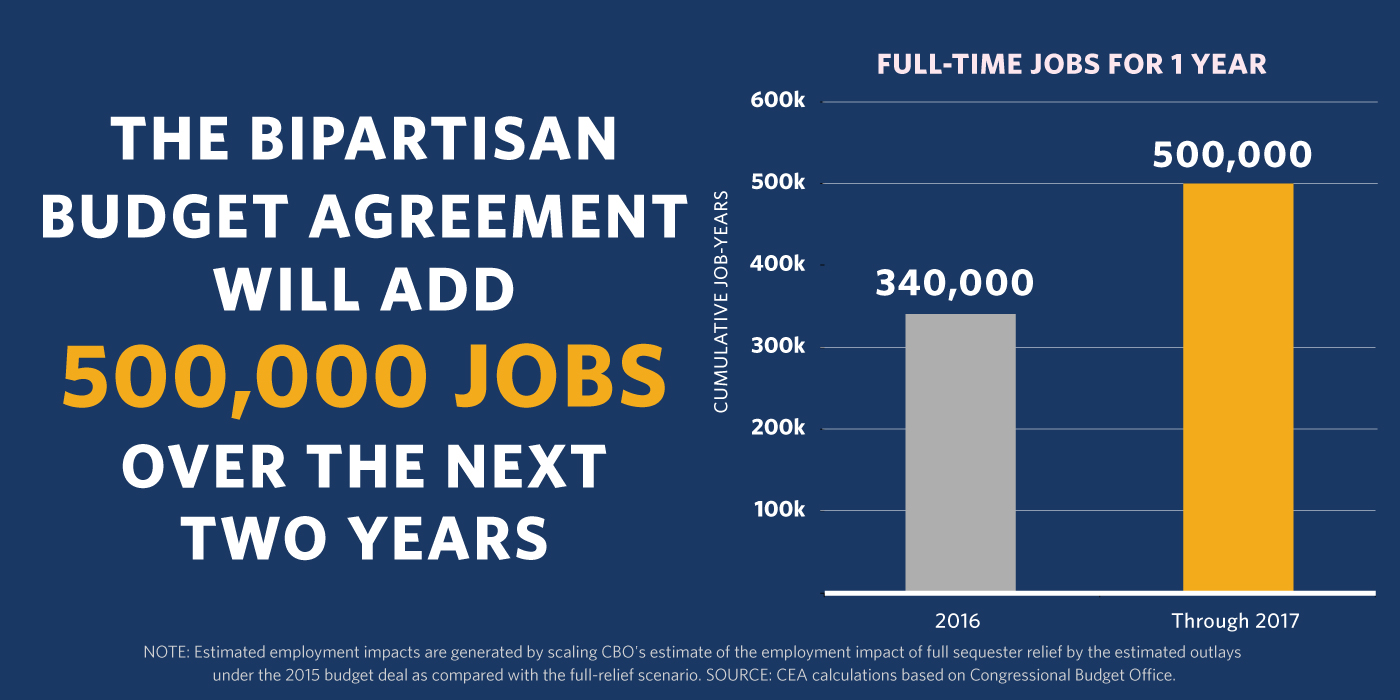 And, by providing $80 billion of sequester relief over the next two years, as well as additional funding, the agreement will also allow for increased investments in key areas that support our economic growth now and into the future -- like education, job training, or medical research:

So how are we paying for stronger investments in our middle class? The agreement is paid for in a balanced way, including $11 billion in revenue from tax compliance measures -- most of which comes from ensuring investors in hedge funds, private equity funds, and other large partnerships pay what they owe in taxes.

Here’s how it works: Under outdated rules dating back to 1982, the IRS cannot effectively audit large partnerships, like hedge funds, private equity firms, or oil and gas partnerships. Unlike with corporations, the IRS cannot simply assess tax against the partnerships -- it has to find each of the individual partners (which can number in the hundreds of thousands), pull their tax returns, compute the tax adjustment, and send every one of them a notice. That’s why it’s not surprising that some hedge funds and other partnerships like this have been at the forefront of aggressive tax avoidance schemes that can add up to billions of dollars of lost revenues for the Federal government.

This agreement replaces the existing auditing rules with a streamlined set of rules so that the IRS can effectively audit large partnerships. This is a substantial step toward ensuring that larger partnerships can no longer avoid paying the taxes that they owe.

What this agreement doesn’t do is balance the budget on the backs of millions of seniors. Instead of harmful cuts to Medicare and Social Security beneficiaries like many Republicans demanded, this agreement actually protects and strengthens these programs in tangible ways. For example, the agreement protects millions of seniors from paying more for their health care by preventing a roughly 50% increase in the Medicare Part B premium in 2016.

This agreement also prevents a 20% cut to Social Security Disability Insurance (SSDI) benefits that would’ve occurred at the end of next year, ensuring that the program can continue to pay full benefits without reducing benefit levels or imposing new eligibility restrictions. By reallocating payroll tax revenues based on the funding needs of both SSDI and the retirement and survivors program, Social Security will be able to pay full disability benefits until late 2022.

This budget agreement reflects promising work between Democrats and Republicans in Congress who were willing to come together to break the cycle of short-sighted decision-making in order to deliver an agreement that works for the middle class. “It allows us to plan for the future,” the President said. “It’s a step forward.”

Now it’s up to Congress to pass this agreement that will avoid harmful, mindless cuts and allow smart investment in a future that will create jobs, support the middle class, and deliver a stronger economy for future generations.