November 6, 2015 at 9:30 AM ET by Jason Furman
Twitter Facebook Email
Summary:
The economy added 271,000 jobs in October, marking the strongest three years of job creation since 2000.

In October, the economy added jobs at the fastest pace so far this year as the unemployment rate declined to its lowest level since April 2008 and broader labor market indicators improved further. Wage growth picked up in October and wages have grown faster over the past twelve months than any other point in this recovery. Nevertheless, we need to take steps to contribute to further job creation and a faster pace of wage growth. Last week’s bipartisan budget agreement will take an important step toward making long-term investments that will add jobs and boost wages. But there is more work to do to extend these positive trends, including increasing investments in infrastructure, implementing high-standards free trade agreements like the Trans-Pacific Partnership, and raising the minimum wage.

Five Key Points on the Labor Market in October 2015

1. Today we learned that private-sector employment rose by 268,000 jobs in October.  Our businesses have now added 13.5 million jobs over 68 straight months, extending the longest streak on record. The unemployment rate ticked down to 5.0 percent in October—its lowest level since April 2008—with stable labor force participation. Wages continued to rise; average hourly earnings for all private employees have now risen 2.5 percent over the past year, the fastest pace achieved since 2009. Moreover, broader labor market indicators improved as the “underemployment” (U-6) rate declined to its lowest level since May 2008 amid a substantial decline in part-time work for economic reasons. Private employment growth in August and September was also revised up by a total of 56,000 jobs. Overall, our economy has created 8.0 million jobs over the past thirty-six months, the fastest pace since 2000. 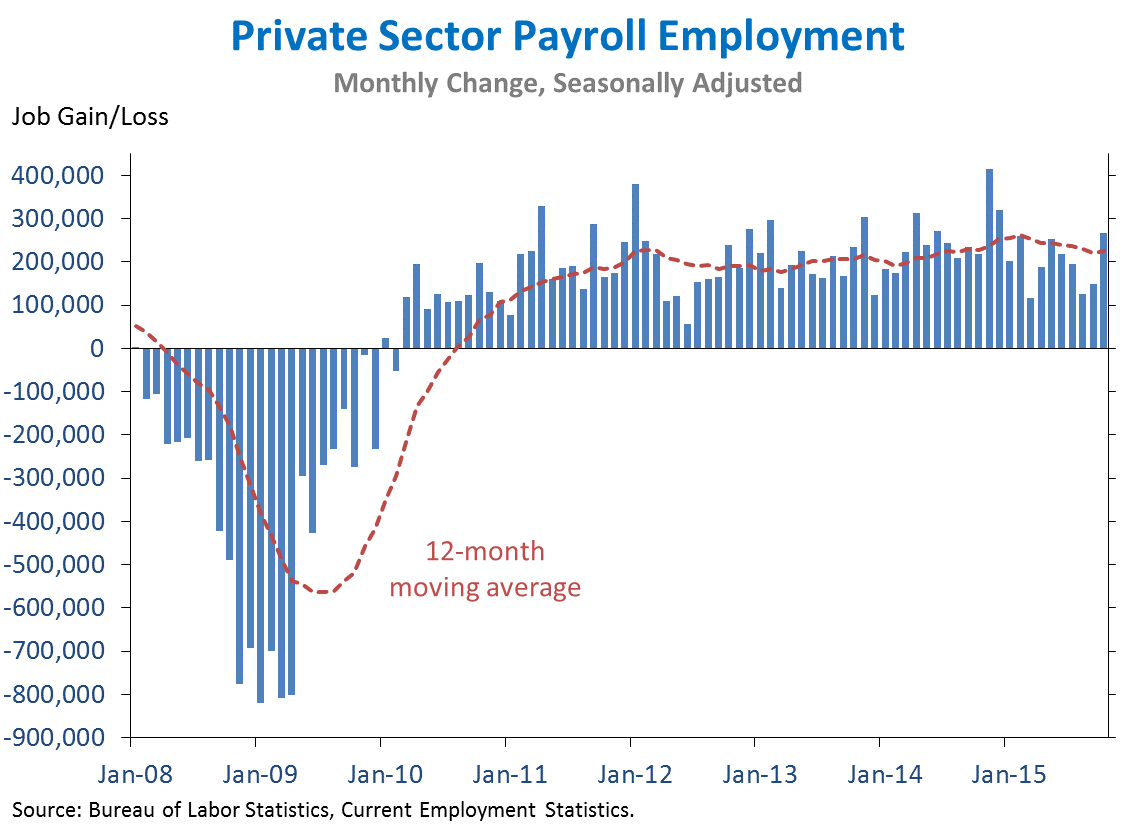 2. To keep the unemployment rate stable, the economy needs to add 77,000 jobs per month. As an aging population places downward pressure on the labor force participation rate, the economy needs to generate fewer jobs than in the past to keep the unemployment rate constant. CEA estimates the breakeven rate of employment growth—the rate needed to maintain a constant unemployment rate over the next year given a labor force participation rate in line with demographic trends—at 77,000 payroll jobs per month. (The exact number can vary substantially from month to month depending on measurement discrepancies in the separate surveys used to measurement unemployment and payroll job creation.) This breakeven rate is broadly comparable to estimates from the Congressional Budget Office and Goldman Sachs.

When the economy adds jobs faster than the breakeven rate, that is consistent with a declining unemployment rate and/or a cyclical rebound in participation. Over the past three years, the economy has added an average of 223,000 jobs per month and the unemployment rate has declined by 2.8 percentage points. There is still more room for the labor market to improve—especially with faster wage growth. But as the unemployment rate gets closer to normalizing, the pace of job growth would be expected to start normalizing as well—consistent with the pattern in past business cycles. 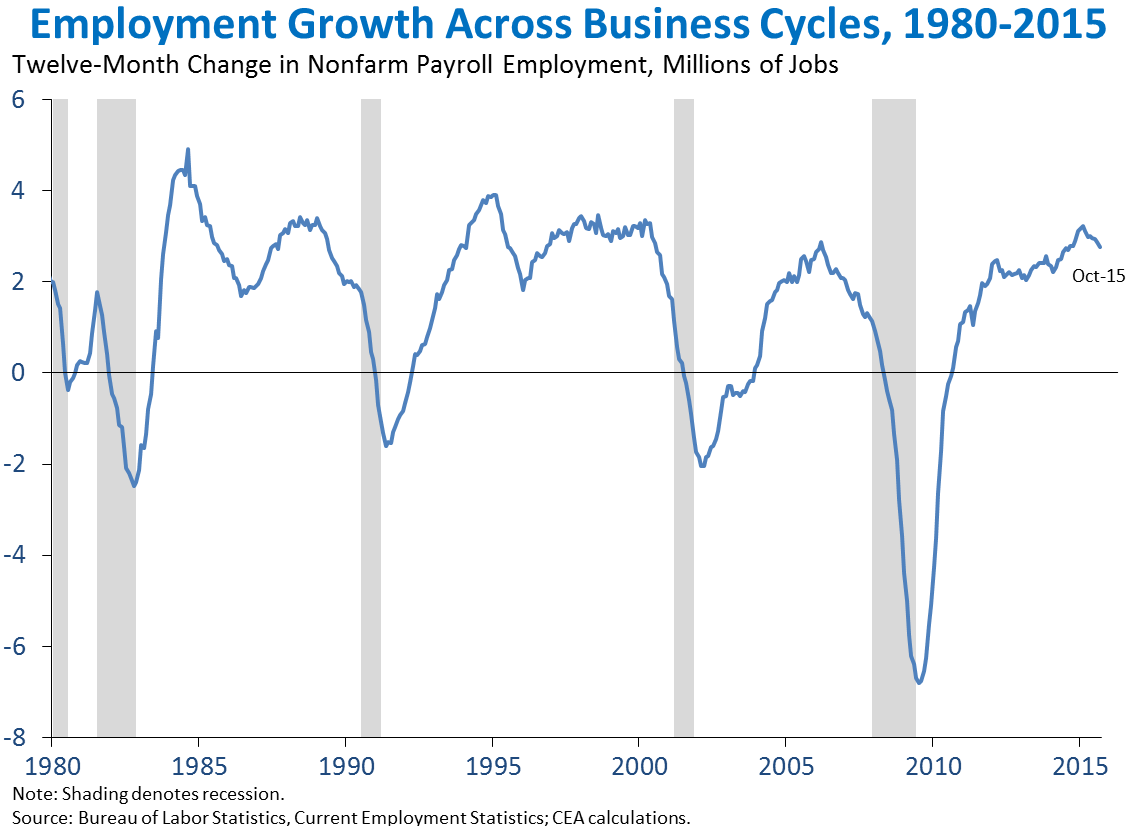 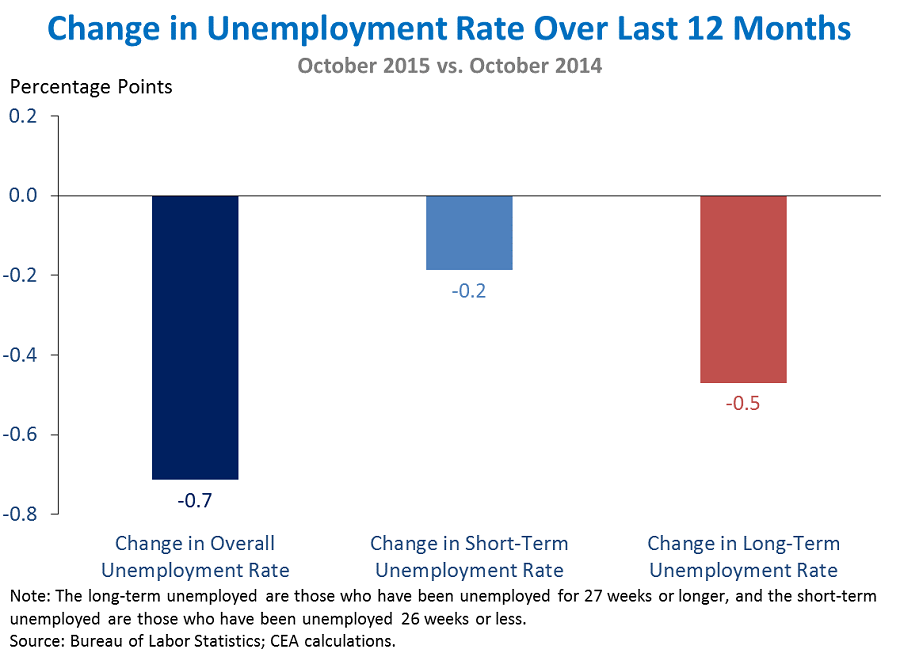 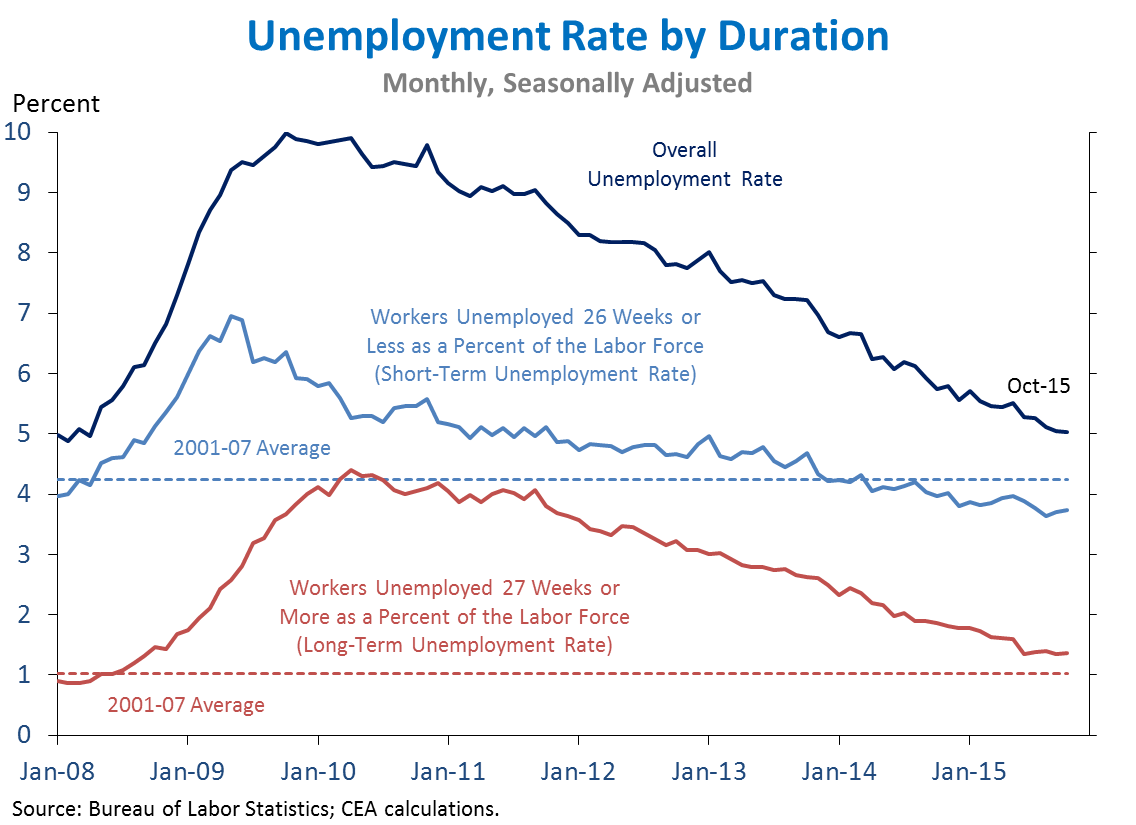 4. Broader indicators such as long-term unemployment and the number of workers employed part-time for economic reasons have grown increasingly sensitive to business cycles over recent decades. In the Great Recession, 56 percent of the increase in unemployment was in the form of long-term unemployment. Part-time work for economic reasons increased by 62 percent of the increase in the overall unemployment rate, indicating a broad deterioration in the labor market above and beyond what was captured by the headline unemployment rate. The cyclical response of each of these indicators in this recession has become larger for a given percentage-point increase in the unemployment rate over recent decades. There has been substantial recovery in these broader labor market measures, but the outsized deterioration in the Great Recession is still not fully healed. 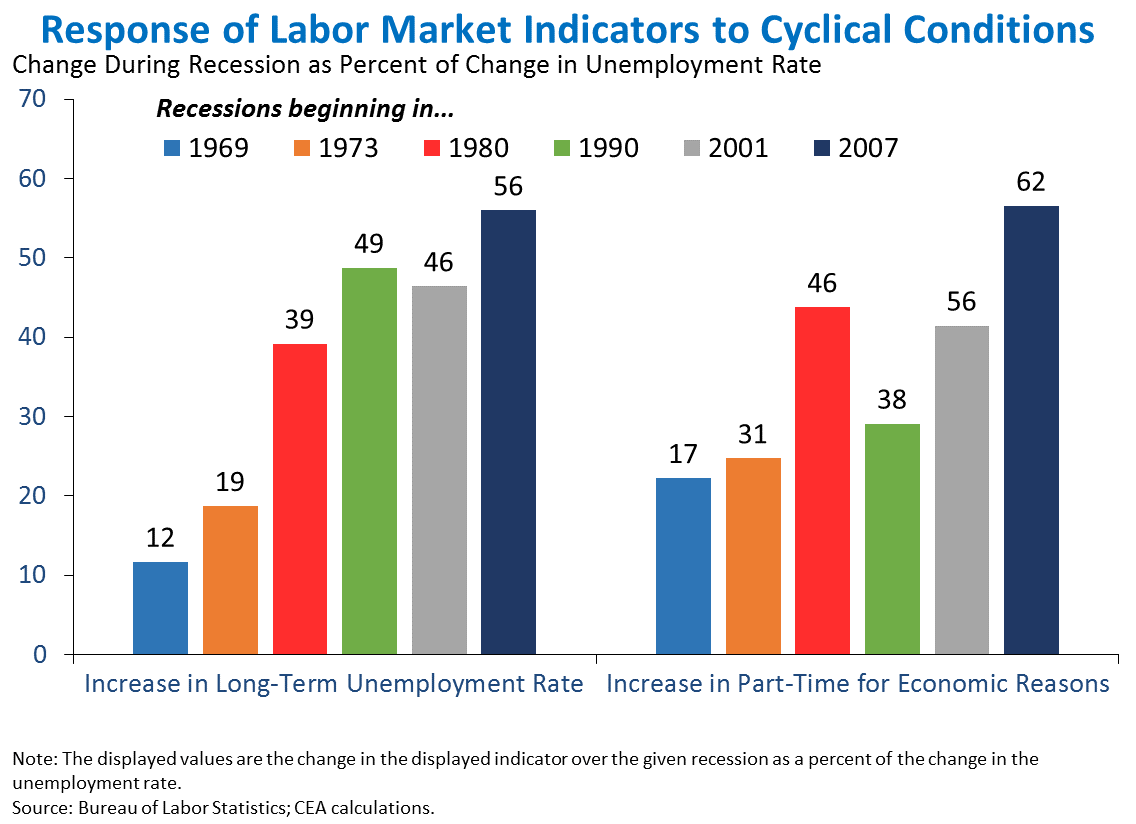 5. The distribution of job growth across industries in October generally followed recent trends, with this month’s faster growth most apparent in services industries while manufacturing continued to face global headwinds. Above-average gains relative to the past year were seen in industries such as retail trade (+44,000) and construction (+31,000). At the same time, manufacturing employment—which is facing headwinds from global growth affecting exports—was flat. Mining and logging employment, which includes oil extraction, continued to decline (-4,000) as low oil prices have slowed investment. Across the 17 industries shown below, the correlation between the most recent one-month percent change and the average percent change over the last twelve months declined to 0.73 from a peak of 0.96 last month, remaining in line with the average correlation over the past two years. 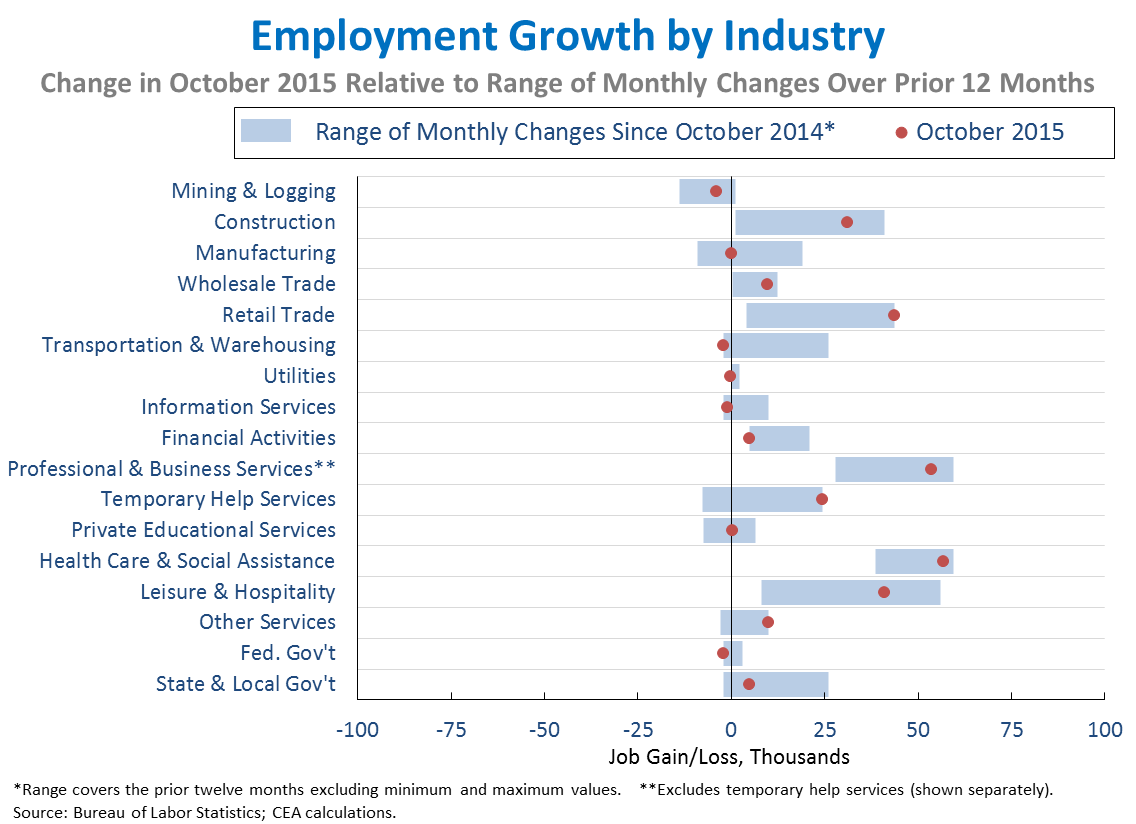