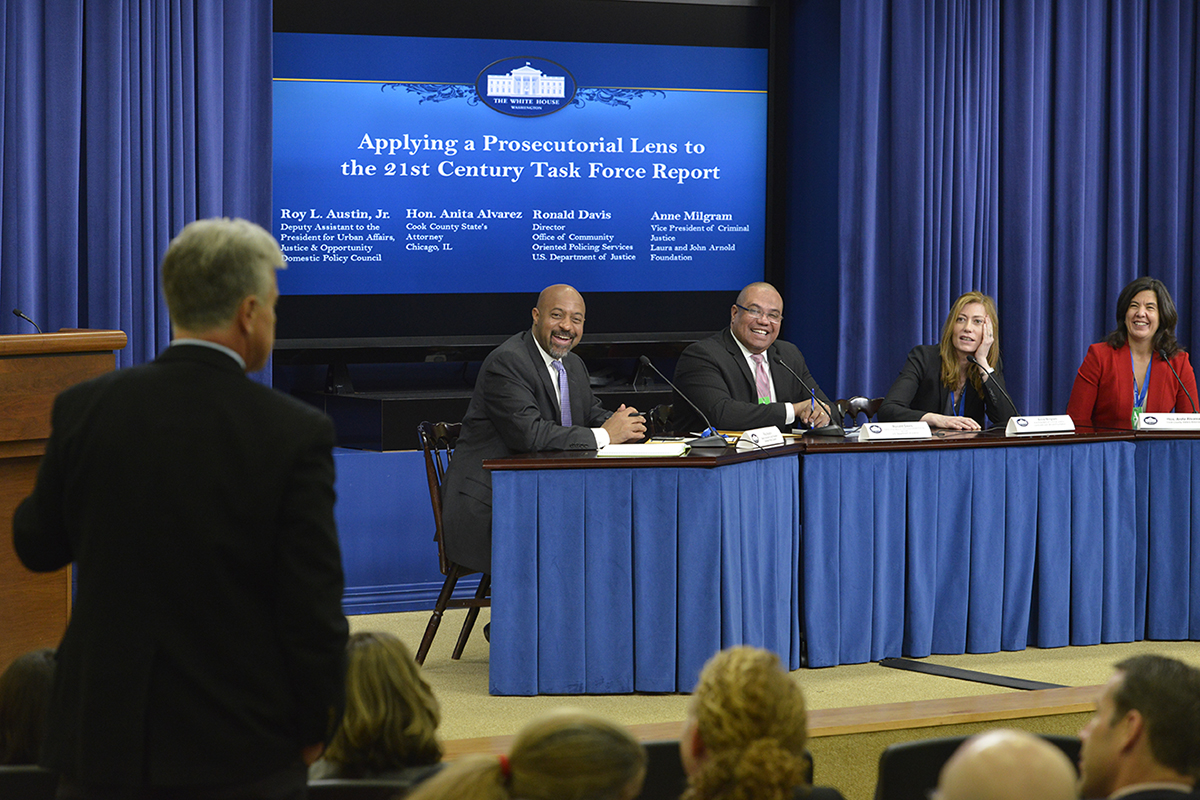 As President Obama has said “[Prosecutors] do outstanding work … But every dollar they have to spend keeping nonviolent drug offenders in prison is a dollar they can’t spend going after drug kingpins, or tracking down terrorists, or hiring more police and giving them the resources that would allow them to do a more effective job community policing.”

Neil Eggleston, Assistant to the President and White House Counsel, provided opening remarks. As a former prosecutor, he emphasized the important role of prosecutors in reforming our criminal justice system:

“Legislative reform is important – at the state and local level as well as the federal level – but so are all of you. It is no exaggeration to say that the future of our justice system depends on the efforts of dedicated prosecutors like you who are seeking to innovate in response to today’s challenges while ensuring our society stays true to the core principles that define us as a Nation.”
Neil Eggleston

The President’s Task Force on 21st Century Policing report underscored the importance of trust, personal relationships, and transparency between law enforcement and the community—the principles of community policing. These same principles are key for community prosecution. The prosecutors in attendance spoke of the need to work directly in neighborhoods to develop relationships with local groups, align enforcement priorities with residents’ public safety concerns, identify community solutions to prevent crime and use data to ensure the effectiveness of prosecutive action. They expressed how increased trust goes hand in hand with public safety.

Participants also highlighted specific initiatives that have successfully improved public trust and safety and how the Justice Department continues to provide grants in support of evidence-based, data-driven efforts to enhance community prosecution programs. As part of the Smart Prosecution Initiative, soon the Department will launch a website for prosecutors around the nation that will provide the latest research, resources, and education to the prosecutorial field.

This Summit is part of a series of convenings held by the Administration on criminal justice reform.

Statements from today’s speakers and participants:

“In almost 30 years as a prosecutor and with prosecutors, today is the first meeting at the White House of local prosecutors dealing with community safety, prosecutorial leadership, racial justice and police-prosecutor relations. On behalf of APA, we thank the President for his leadership.”
David LaBahn, President and CEO of Association of Prosecuting Attorneys

“We cannot accomplish our mission of protecting people and making our communities safer without having the trust and involvement of those we serve. This conference is important to ensure that prosecutors are doing their part to establish that linkage and thereby reduce crime.”
Anita Alvarez, Cook County State’s Attorney

“I want to thank President Obama for hosting the APA and convening the country’s prosecutorial leadership to thoughtfully address the challenge of keeping our communities safe in a way that builds trust and strengthens the relationship between law enforcement and the citizens we serve."
John Chisolm, Milwaukee County District Attorney

“I was extremely proud as the President of the National Black Prosecutors Association to be a part of the APA’s panel on Implicit Bias. As prosecutors, we are the guardians of justice; bringing awareness to this issue will make prosecutors more effective at their jobs, while ensuring fairness in our system. I echo the sentiments of President Obama as he continues to challenge us in the criminal justice system to be smart, as well as tough on crime, engage our communities, and invest in those who need us the most."
Melba V. Pearson, Assistant Chief in the Career Criminal/Robbery Unit, Miami-Dade State’s Attorney’s Office

“Honored to be gathered at the White House with prosecutors from around the nation to discuss best practices and improve the fair administration of justice.”
Jeff Reisig, Yolo County District Attorney

"Our thought-provoking discussions at the White House today underscore the central role prosecutors must play in reforming and instilling confidence in our justice system… We’re challenging old assumptions about how to make our jurisdictions safer and identifying concrete ways we can be most effective--not only in the courtroom, but in the communities we serve."
Mike Feuer, City Attorney of Los Angeles

“I am very grateful to President Obama for hosting a National Prosecution Summit at the White House. Critical conversations occurred regarding important topics such as implicit bias and its link to the prosecution function as well as the role of prosecutors in the body-worn camera dialogue. This opportunity for an important exchange of ideas is extremely helpful to prosecutors in having a fair and balanced system of justice in our communities."
Rod Underhill, Multnomah County District Attorney