Follow Along: A Global Agreement to Act on Climate

December 14, 2015 at 10:04 AM ET by Tanya Somanader
Twitter Facebook Email
Summary:
President Obama and world leaders just secured the most ambitious global climate agreement in history. Get the latest.

Today, nations of the world have come together to announce a historic achievement: the most ambitious global agreement to combat climate change.

The Paris Agreement establishes a long term, durable global framework to reduce global greenhouse gas emissions. For the first time, all countries commit to putting forward successive and ambitious, nationally determined climate targets and reporting on their progress towards them using a rigorous, standardized process of review.

Learn everything you need to know about how the agreement will work here.

Watch President Obama lay out what a successful global climate agreement in Paris looks like:

Watch @POTUS lay out what a successful global climate agreement looks like at #COP21 in Paris. #ActOnClimate https://t.co/BUhyI7reKb

Learn everything you need to know about these global efforts here.

Every day, we are seeing and feeling the effects of climate change -- here and across the globe. It poses a clear and present threat to our economic and national security. No country is immune from the consequences of climate change, and no country can act alone. Right now, we, as people, face a critical moment.

For the first time in history, we have a chance to put in place a global climate agreement that will spur countries to take ambitious action that will reduce carbon pollution, support clean energy, and ensure we deliver a planet that is worthy of future generations. That is why President Obama is heading to Paris on November 29. He will meet with leaders of countries large and small -- the world's largest emitters and the ones that are most at risk -- to find a way we can collectively reduce global emissions.

Watch what the President had to say about it on his Facebook page:

Hello, Facebook! I finally got my very own page. I hope you’ll think of this as a place where we can have real conversations about the most important issues facing our country – a place where you can hear directly from me, and share your own thoughts and stories. (You can expect some just-for-fun stuff, too.)I’m kicking it off by inviting you to take a walk with me in my backyard – something I try to do at the end of the day before I head in for dinner. I say this often, but that’s because it’s always at the front of my mind: We’ve got to preserve this beautiful planet of ours for our kids and grandkids. And that means taking serious steps to address climate change once and for all. Now, we've made a lot of progress to cut carbon pollution here at home, and we're leading the world to take action as well. But we’ve got to do more. In a few weeks, I’m heading to Paris to meet with world leaders about a global agreement to meet this challenge.I hope you'll join me in speaking out on climate change and educating your friends about why this issue is so important. At a time when nearly three in four adults online use Facebook, this feels like a great place to do it. Share your thoughts in the comments, and pass this message on to folks you think need to see it.If we're all in this together, I'm confident we can solve this and do right by future generations.

Under President Obama, we've already taken the lead on the world stage. The President's Clean Power Plan will cut emissions from the U.S. power sector -- which makes up a third of U.S. emissions -- by more than 30 percent by 2030 and save more than $50 billion in climate and health-related costs in the process. It's the largest step the United States has ever taken to combat climate change.

And under his leadership, other countries are following suit. China, Brazil, and more than 180 countries representing nearly 95% of global emissions have announced climate targets, or Intended Nationally Determined Contributions (INDCs).

In Paris, he will work with world leaders to secure an agreement that:

In Paris, the President will meet with President Xi of China, Prime Minister Modi of India, and leaders of island nations including the Seychelles, Kiribati, the Marshall Islands, Papua New Guinea, St. Lucia, and Barbados, to discuss the existential challenge these countries face from rising sea levels.

No agreement can serve as the "silver bullet" to solve climate change. However, this agreement could help ensure that American action is met with global action to reduce the impact of climate change and preserve a planet that is worthy of our children. So check back here to get the latest from Paris, follow @FactsOnClimate, and learn what more you can do to help ensure the world joins the U.S. to #ActOnClimate.

How is climate change impacting your community? 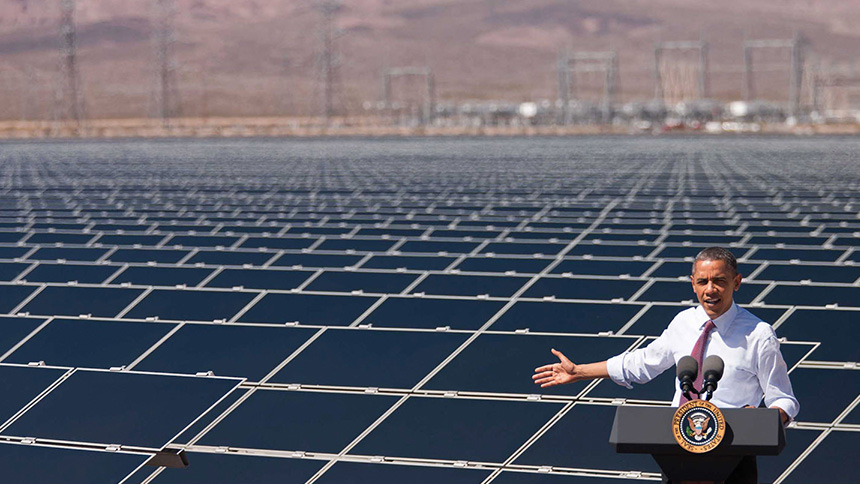 Learn more about the biggest step we’ve ever taken to combat climate change.