December 4, 2015 at 9:30 AM ET by Jason Furman
Twitter Facebook Email
Summary:
The economy added 211,000 jobs in November, marking the strongest three years of job creation since 2000.

The strong pace of job growth continued in November as the unemployment rate held at its lowest level since April 2008 and labor force participation ticked up. We have added more jobs over the past three years than in any three-year period since 2000, and wages are continuing to rise. Nevertheless, we have more work to do to drive further job creation and faster wage growth. That’s why Congress should take steps including passing a complete budget that builds on October’s bipartisan budget agreement, approving the Trans-Pacific Partnership to open our exports to new markets, and raising the minimum wage.

FIVE KEY POINTS ON THE LABOR MARKET IN NOVEMBER 2015

1. Our businesses have now added 13.7 million jobs over 69 straight months, extending the longest streak on record.  Today we learned that private-sector employment rose by 197,000 jobs in November. Private employment growth in September and October was revised up by a combined 52,000 jobs, bringing October’s growth to 304,000—the best month of the year so far. The unemployment rate held at 5.0 percent in November, even as labor force participation edged up to 62.5 percent. Wages continued to rise; nominal average hourly earnings for all private employees have now risen 2.3 percent over the past year. Overall, our economy has created 8.1 million jobs over the past thirty-six months, the fastest pace since 2000. 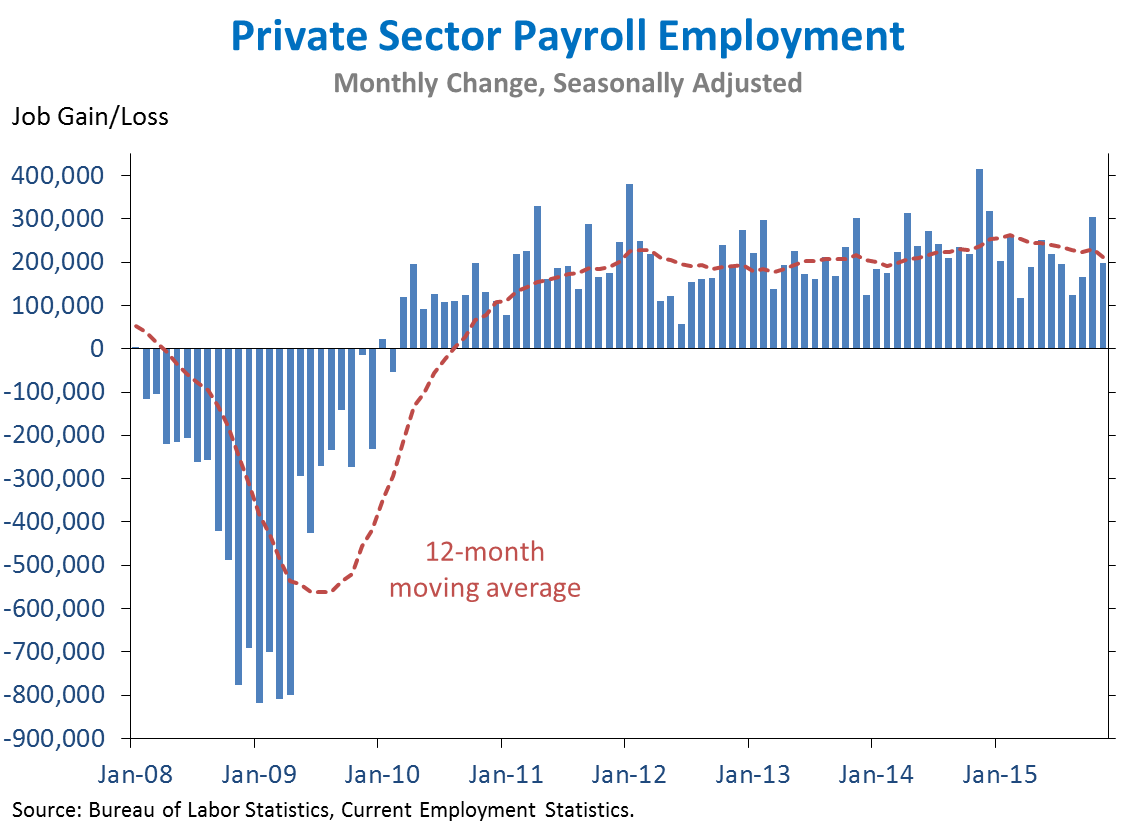 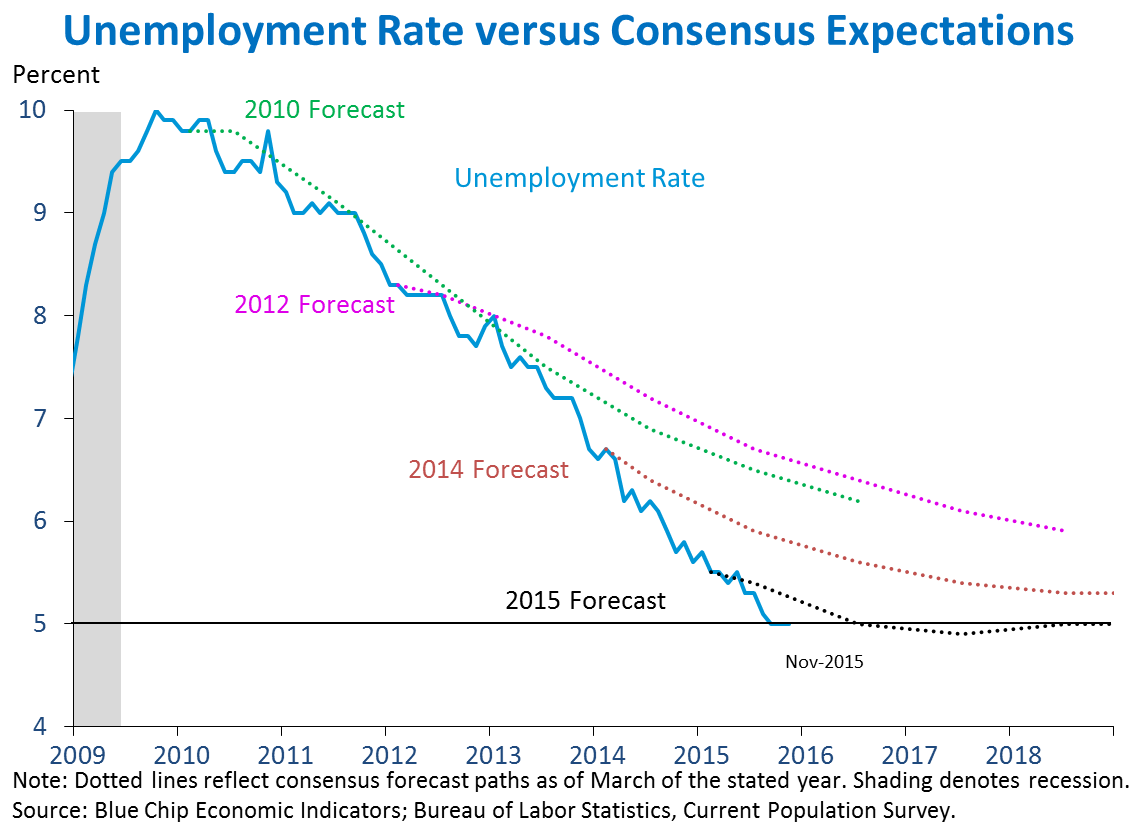 3. Average hourly earnings for all private-sector workers rose 2.3 percent over the past twelve months, a somewhat faster pace than the average over this recovery. Although earnings growth has not yet reached desirable levels, it increased amid the strong pace of employment growth over the past year. At the same time, declining energy prices have driven inflation to especially low levels, benefiting wage-earners by further boosting real (inflation-adjusted) earnings growth. Even over the past three years, real hourly earnings for production and non-supervisory workers have risen 1.6 percent per year, well above the average annual pace of 0.5 percent during the previous economic expansion. The recent uptrend in nominal earnings growth is an encouraging sign for the labor market, but because nominal earnings often grow between 3 and 4 percent during expansions, there is more work to do to boost wages as the recovery continues. 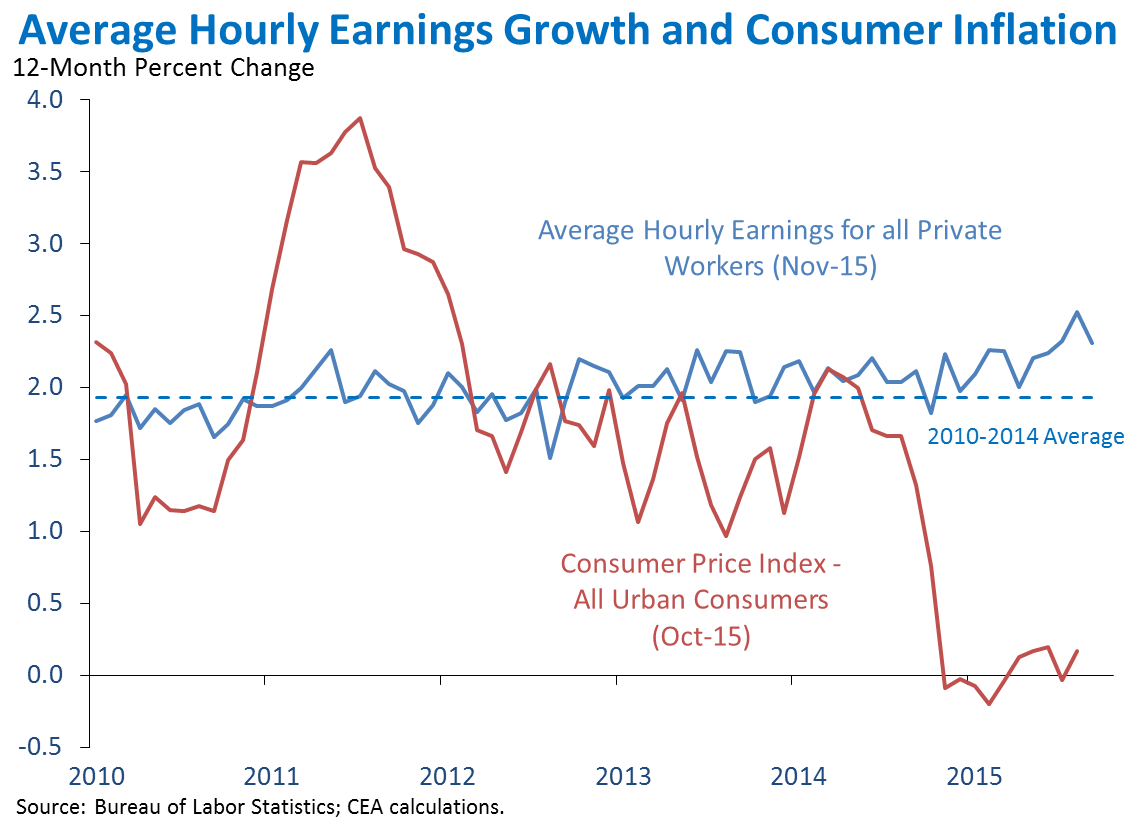 4. The demographic factors that boosted employment growth in previous decades have been less supportive during this expansion, but the recovery in our unemployment rate has been especially strong. Employment growth depends on three factors: population growth, the extent to which the population participates in the labor force, and the extent to which the labor force is employed. The chart below decomposes employment growth into contributions from each of these factors. It further decomposes labor force participation into shifts attributable to demographics (such as the changing age distribution) and shifts attributable to other factors (such as the increased participation of women). Demographic factors boosted employment growth in previous decades, as population grew faster than current rates and baby boomers reached working age. But in this recovery, demographic factors have been less supportive as overall population growth has slowed and the baby boomers have begun to retire. However, the sharp decline in our unemployment rate—reflecting the depth of the recession and the strength of our job market recovery—has contributed more to employment growth than in any of the past five expansions. 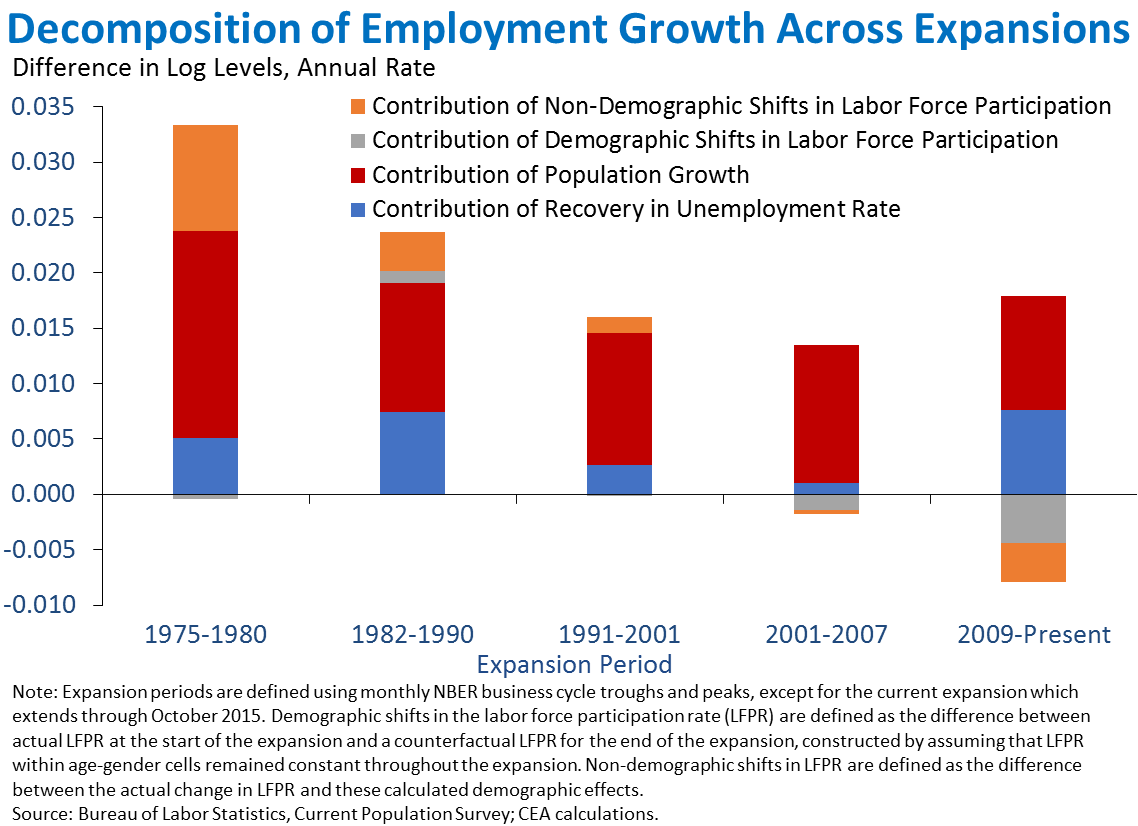 5. Global headwinds weighed on manufacturing and mining job growth in November, while industries less sensitive to such factors continued to see robust gains. Above-average gains relative to the past year were seen in industries such as construction (+46,000), financial activities (+14,000), wholesale trade (+9,000), private educational services (+8,000), and utilities (+2,000). At the same time, manufacturing employment—which is especially sensitive to global growth—fell slightly (-1,000). Mining and logging employment, which includes oil extraction, continued to decline (-11,000) as low oil prices have slowed investment. Across the 17 industries shown below, the correlation between the most recent one-month percent change and the average percent change over the last twelve months was 0.85, somewhat above the average correlation over the previous two years. 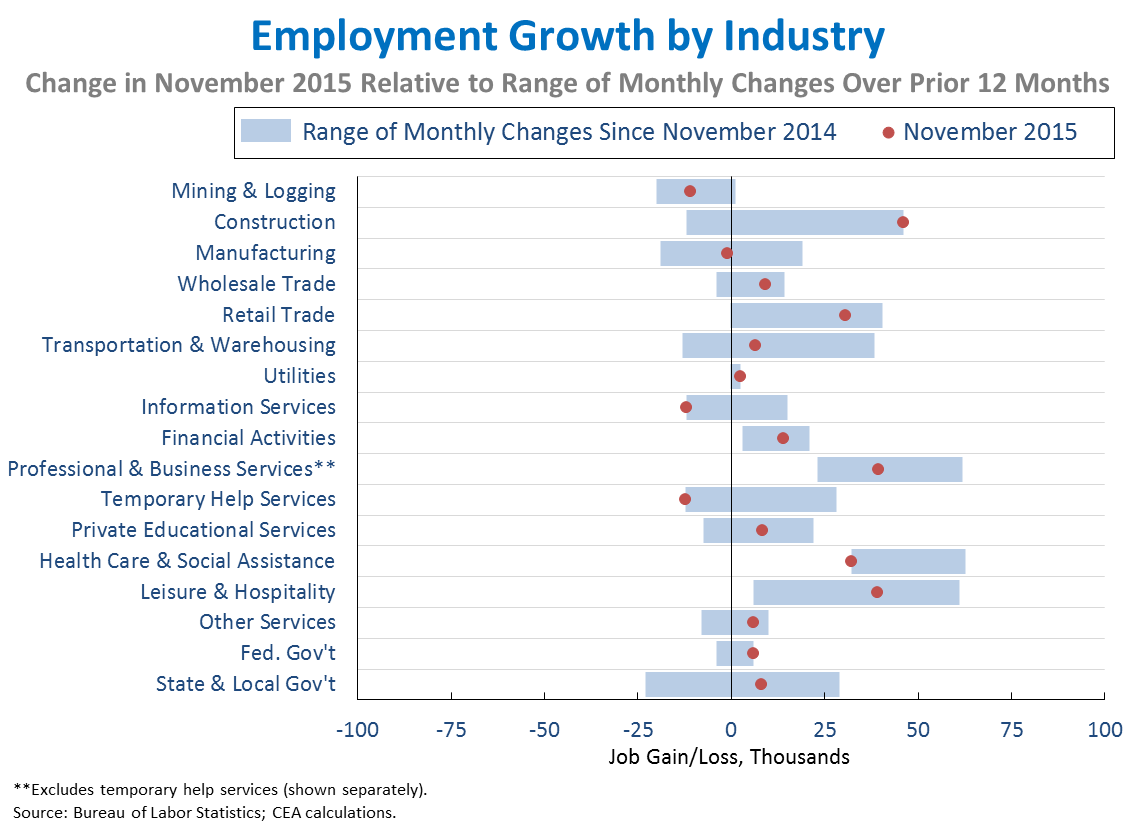