Hanukkah at the White House 2015 – Memories, Menorahs and the Maccabeats!

December 15, 2015 at 6:28 PM ET by Matt Nosanchuk
Twitter Facebook Email
Summary:
Here's a round-up of how we celebrated the Festival of Lights here at the White House.

Now that all the candles have been lit, and we store our menorahs and dreidels until next year, we wanted to provide you with a round-up of how we celebrated the Festival of Lights here at the White House.

Of course, the highlight of the celebration of Hanukkah here at the White House are the annual Hanukkah receptions. The President and First Lady welcomed more than 500 guests to each of two receptions on Wednesday, December 9.

As in recent years, the latkes, lamb chops and other menu items were prepared in the White House Kitchen under the strict rabbinical supervision of Rabbi Levi Shemtov, Lubavitch Center of Washington (Chabad), in cooperation with the Rabbinical Council of Greater Washington.

At the afternoon reception, the President and First Lady welcomed President Reuven Rivlin of Israel and his wife, Mrs. Nechama Rivlin, to join them in the candle lighting ceremony, following a productive bilateral meeting between the two heads of state. This was the first time the Israeli President joined the President of the United States to light Hanukkah menorah together at the White House. This special moment underscored the deep and enduring friendship between the United States and Israel. Rabbi Susan Talve of the Central Reform Congregation in St. Louis, Missouri recited the candle lighting blessings.

You can watch the candle lighting at the afternoon reception here:

At the evening reception, the President and First Lady were joined on stage for the candle lighting by Manfred “Manny” Lindenbaum, and his granddaughter, Lauren Lindenbaum. Manny Lindenbaum is a Kindertransport survivor who, at the age of 81, traced his refugee journey backwards from Poland to Germany on a bicycle to raise money for HIAS programs in Chad in honor of World Refugee Day.  He was joined on his journey by his grandchildren, including Lauren, a 20-year-old college student, who represented her generation at the candle lighting. Rabbi Sid Schwarz of Adat Shalom Reconstructionist Congregation in Bethesda, Maryland, recited the candle lighting blessings.

At the afternoon Hanukkah reception, guests were welcomed by well-known Jewish a cappella group the Maccabeats. With more than 20 million YouTube views, the Maccabeats brought their dynamic sound and style to the White House. You can watch a clip of the Maccabeats singing at the White House here. During their performance, we [posted a fill in what we did] to give more folks a chance to see them performing here for Hanukkah.

Many guests who came to Washington for the Hanukkah receptions also had the opportunity to hear from top officials at two policy briefings. Speakers discussed the U.S.-Israel relationship, the P5+1 Nuclear Agreement with Iran, our efforts to degrade and destroy ISIL, the conflict in Syria, and our response to the Syrian refugee crisis. The speakers included Amy Pope, the White House  Deputy Homeland Security Advisor; Frank Lowenstein, the Special Envoy for the Israeli Palestinian Negotiations at the Statement Department; Yael Lempert, Senior Director for Israel, Egypt and the Levant on the National Security Council; Jeff Prescott, Senior Director for Syria, Iraq and the Gulf States; Ambassador Stephen Mull, the Lead Coordinator for Iran Nuclear Implementation at the State Department; Colin Kahl, National Security Adviser to the Vice President; and Leon Rodriguez, the Director of U.S. Citizenship and Immigration Services at the Department of Homeland Security.

As he does every year, President Obama issued a statement on Hanukkah. You can read his statement here.

For the first night of Hanukkah, White House Chief of Staff Denis McDonough joined hundreds of guests on the Ellipse for the lighting of the National Menorah. At this event, sponsored by the American Friends of Lubavitch (Chabad), McDonough delivered remarks on behalf of the Administration and ascended to the top of a menorah in a cherry picker with Rabbis Abraham and Levi Shemtov to light the first candle on the large menorah. 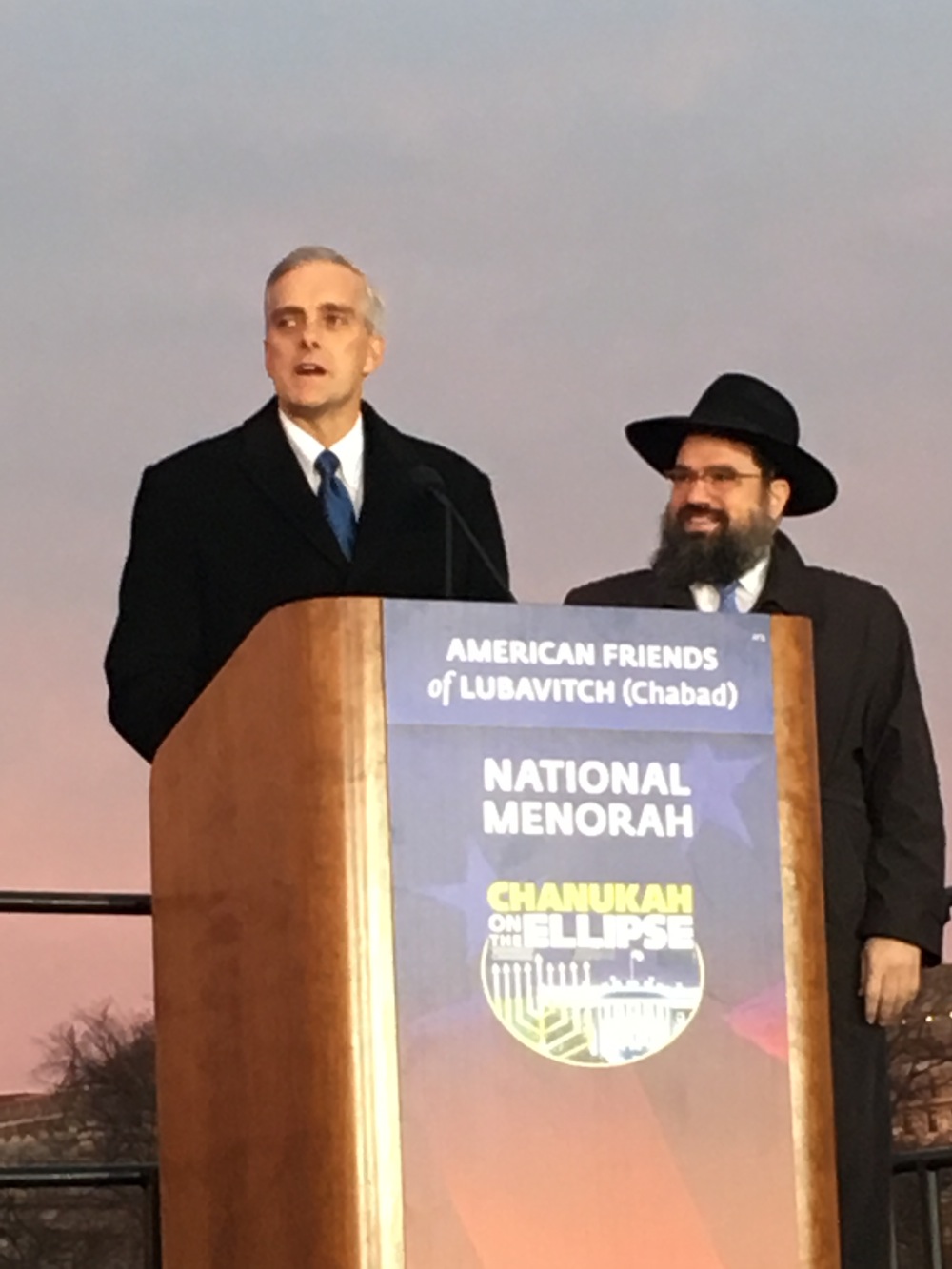 So as Hanukkah 2015/5776 draws to a close, I hope the lights of Hanukkah brightened your homes and that you had the opportunity to celebrate the miracles in our lives.