November 23, 2015 at 3:48 PM ET by Michael Lomio and Sandra Shim
Twitter Facebook Email
Summary:
Throughout our history, Americans have stepped up to help the world's most vulnerable.

Welcoming the world’s vulnerable who seek the safety of America is not new to us. We've safely welcomed 3 million refugees since 1975.
President Obama

Right now, the world is witnessing one of the worst refugee crises in history. Be it due to violence, persecution, or natural disaster, 60 million men, women, and children have been forced to flee their homes through no fault of their own. It would be a betrayal of our values as Americans if we fail to aid these refugees when we know we can help them. After all, that's who we are.

Throughout our history, the United States has provided refuge to the world's most vulnerable while ensuring the safety and security of the American people. Here are just a few photos that show these moments:

After the horrors of World War I, posters like this one, captured America’s attention.

As awareness spread of misfortune overseas, Americans mobilized to help. This is a photo from 1918 of children making toys for their beleaguered counterparts overseas.

After the Allies succeeded in their World War II efforts, a post-war humanitarian crisis, where millions were left homeless, ensued. At the time, the United States was leading the international refugee effort, but due to political resistance, America was unable to provide a safe haven for millions of displaced persons.

However, in 1943, President Franklin D. Roosevelt recognized the need to ameliorate the refugee crisis. He helped to create the United Nations Relief and Rehabilitation Administration (UNRRA), which worked to “plan, coordinate, administer or arrange for relief of victims of war” in UN-controlled areas with “food, fuel, clothing, shelter, and other basic necessities, medical and other essential services.” The UNRRA later became the United Nations International Refugee Organization (IRO), an international organization that was largely influenced U.S. funding and policy.

With the help of U.S. agencies, 12-year old Michael Pupa was able to find a family and a home with foster parents in Cleveland, Ohio after eight years of running from Nazi persecution. Mr. Pupa now resides near Cleveland with his wife, Anita and his two children, Jill and Marc.

Between 1975 and 1979, some 300,000 Vietnamese and Cambodian refugees fled political chaos and were admitted to America through Presidential action. The next year, Congress passed the Refugee Act of 1980, which established a secure system for reviewing and adjusting the refugee ceiling to meet emergencies head-on while ensuring public safety.

On April 3, 1975, mounting evidence alluded to the imminent fall of South Vietnam. With the fear of political retribution looming, President Gerald R. Ford authorized the evacuation of thousands of Vietnamese orphans to the United States. Between April 3 and April 15, approximately 2,000 orphans were transported to the United States in what would later be known as Operation Babylift.

Immediately after the fall of South Vietnam, thousands of refugees fled to the Sa Kaeo Refugee Camp. Three years later, First Lady Rosalynn Carter, followed by over one hundred reporters, came to visit the refugee camp. She spread awareness around the world about a distressed people who were shunned by their neighbors. The attention she helped bring to that camp galvanized desperately-needed international aid. By 1995, the United States government had accepted nearly 500,000 refugees.

After the darkest days of the Kosovo War, nearly 1 million individuals had been displaced by the crisis. Under the leadership of President Bill Clinton, the United States provided approximately 3,100 tons of food to refugees and over $5 billion in peacekeeping costs. America led an effort that ensured Eastern European refugees were well-fed and well-protected.

President Obama has led the effort to continue this American legacy of humanitarian assistance.

In addition to the $4.5 billion in humanitarian assistance to help meet the urgent needs of those affected by the conflict, the President has committed to resettle at least 10,000 Syrian refugees in the United States by next year while still ensuring our safety.

But the President is not alone. 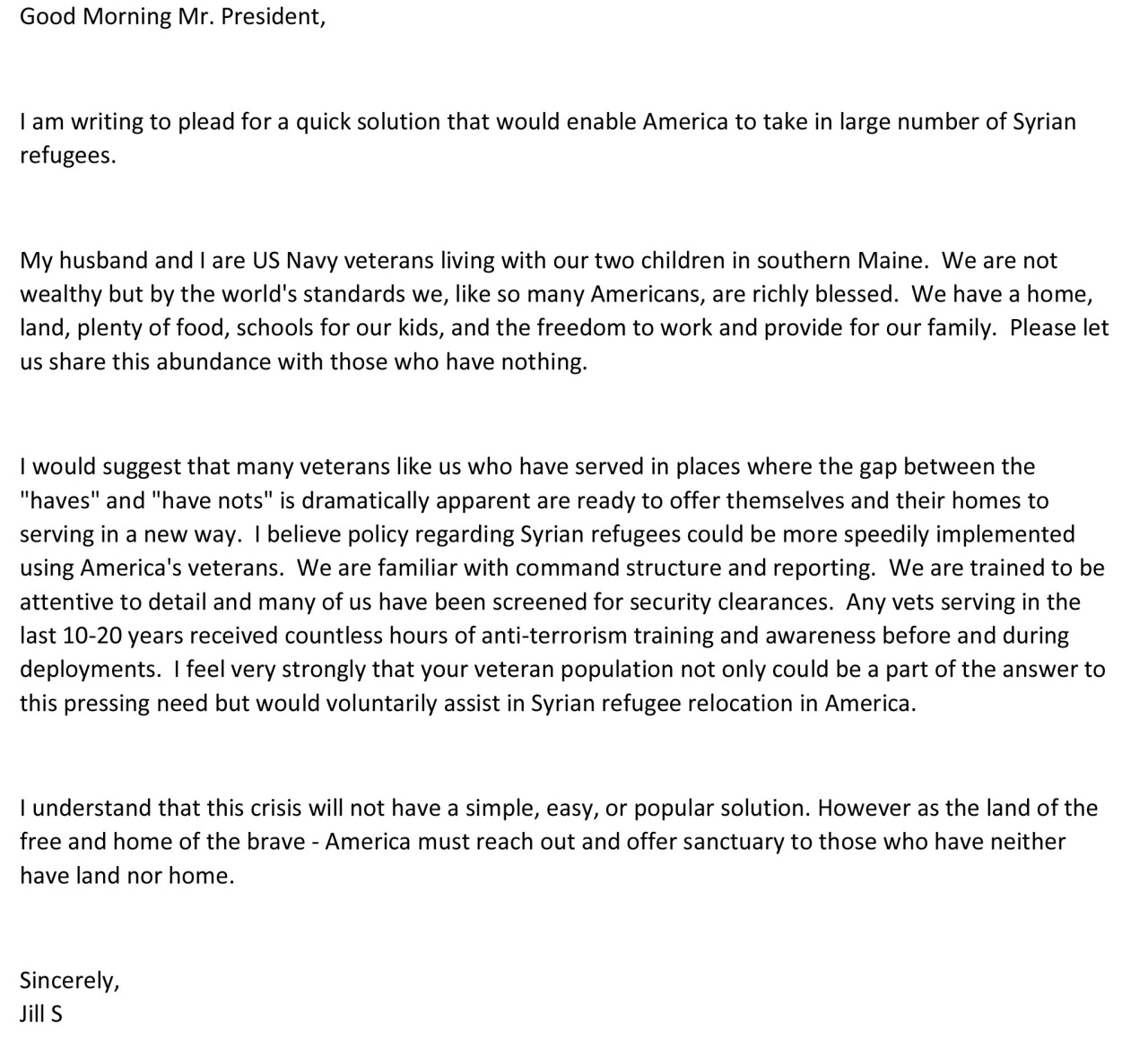 Americans like Jill are asking what they can do to help Syrians and other refugees in need.

Join them – enter your location into this map to find volunteer opportunities at organizations that are helping refugees start fresh in your community.