January 9, 2016 at 12:50 PM ET by Josh Earnest
Twitter Facebook Email
Summary:
We're commemorating President Obama's final State of the Union address with a special way to look at his past speeches.

Today, White House Press Secretary Josh Earnest sent the message below to the White House email list to share a new way to look at President Obama's past State of the Union speeches.

"We will rebuild. We will recover. And the United States of America will emerge stronger than before."
--President Obama, February 24, 2009

That's what President Obama said in his first address to Congress in 2009. Our nation was in midst of what we now know was the worst economic crisis since the Great Depression. Our economy was shrinking, our businesses were shedding jobs each month, and our auto industry had flatlined. Americans across the country were faced with the worrying threat of losing the stability they had worked to build their whole lives for themselves and their families.

Through the years, the President has worked with the American people to rebuild and strengthen our economy, our security, and our leadership in the world. Each year, in every one of his State of the Union addresses, you can see the progress we've made together.

So -- to commemorate his final address this Tuesday -- we've put together something special:

We've assembled all of the President's addresses to Congress on Whitehouse.gov using Genius, adding line-by-line annotations that offer more context on specific proposals he made and a behind-the-scenes look at how these speeches came together. 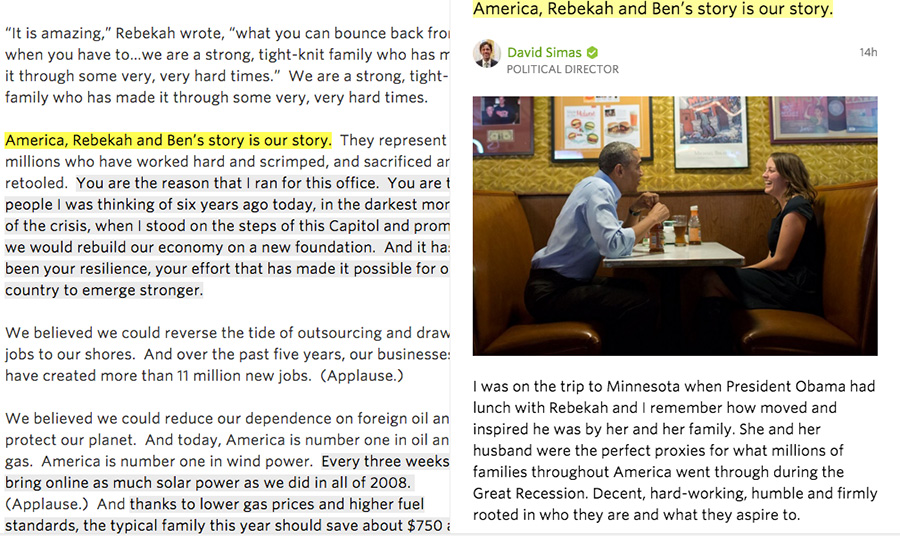 In each year since 2009, the President's State of the Union addresses have bookmarked pivotal moments in the story of our nation: from expanding universal, affordable health care to securing the the most ambitious global agreement ever to combat climate change.

Check out each speech -- complete with videos, graphics, and stories from the staffers behind the policies.

Then, make sure you RSVP to watch President Obama's final State of the Union speech next Tuesday at 9:00pm ET. You won't want to miss what the President has planned for the year ahead.

See more on this year's State of the Union: