Increasing electricity from renewable sources of energy has been a key element of President Obama’s strategy to position the United States as the global leader in clean energy.  Past Administration initiatives brought continued progress in 2015 toward developing America’s ability to generate clean electricity from wind and solar power.  New policies and programs in 2015 to promote clean energy promise to maintain that strong momentum.

The United States reached a new milestone in wind generating capacity in November 2015, when total U.S. wind generation capacity exceeded 70 gigawatts (or GW – for comparison, the nameplate capacity of Hoover Dam is about 2 GW).  U.S. wind generating capacity is spread across 40 states and Puerto Rico, with over 50,000 wind turbines operating at more than 980 utility-scale wind farms.  Wind power resources continue to be developed across the United States, with more than 13 additional GW of capacity currently under construction. 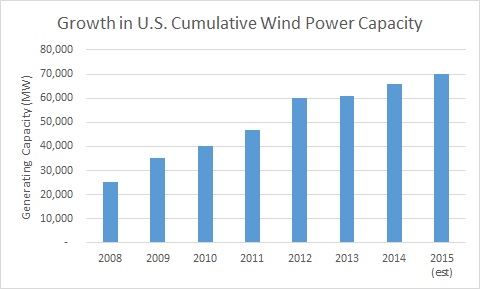 The amount of electricity generated from wind has grown even more strongly, by a factor of more than three since 2008. 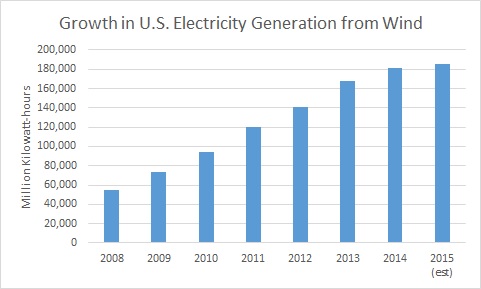 The United States is far from exhausting the potential of its considerable wind resources.  In March 2015, the Department of Energy (DOE) updated its Wind Vision report, which found that wind has the potential to generate 35 percent of U.S. electricity by 2050 and published the Enabling Wind Power Nationwide Report, which found that wind can be a viable source of renewable electricity in all 50 states by 2050.

2015 was also a year of strong growth for U.S. electricity generation from solar power.  Solar photovoltaic (PV) installation continued at a record-breaking pace.  According to data from GTM Research and the Solar Energy Industry Association’s U.S. Solar Market Insight Report, the third quarter of 2015 was the eighth consecutive quarter in which more than 1 GWdc of PV was installed in the United States, with an even higher level of installation expected in the final quarter of 2015.  According to GTM Research, since 2008, U.S. solar PV capacity in all applications (residential, commercial, and utility) has grown 30-fold, as shown in the below chart. 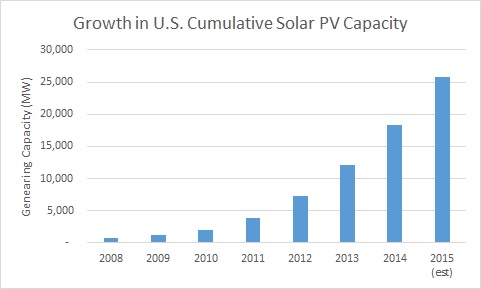 Generation of electricity by utility-scale PV and concentrating solar power facilities also continued to grow strongly in 2015.  The EIA reported last month that 50 percent more electricity was generated from these two sources of solar power in January-October 2015 than in the corresponding 10 months in 2014.  Growth in solar electricity generation at utility scale, from 2008 to 2015, has also been 30-fold. 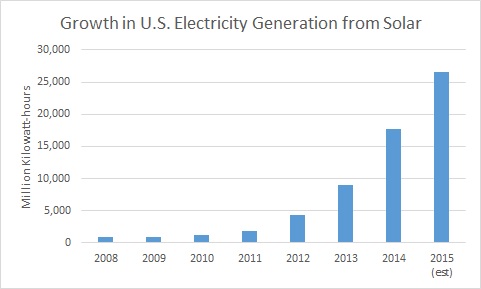 Future progress in the development of renewables for electricity generation will be enabled by the extension last month of important tax incentives for deploying these technologies.  On December 18, President Obama signed legislation that extended the existing production tax credit for wind energy for 2015 and 2016, and phased in down in later years.  This law also extended the investment tax credit for both residential and commercial solar installations, with a gradual phase down in 2021 and 2022.  These extensions, and the long-term certainty that they provide for renewable electricity project development, will continue to boost development of these clean energy resources as part of the U.S. energy mix.

In addition to the Administration’s strong support for financial certainty for the development of new renewable sources, it created new programs and partnerships in 2015 to support the further development of solar power, including a National Community Solar Partnership, a goal to install 300 megawatts of renewable energy in federally subsidized housing, and commitments from housing authorities, rural electric co-ops, power companies, and investors to advance solar energy deployment in low- and moderate-income households.

The Administration also continued to support job training for solar energy deployment, including a new Solar Ready Vets program, launched in April 2015 to train transitioning military personnel for careers in the solar industry (which already employs a higher percentage of veterans than the economy as a whole).  The program is slated to expand to 10 military bases in 2016.

Finally, the Administration’s Clean Power Plan (CPP) will likely result in further progress on renewable electricity development in those states that choose to develop renewable energy resources as part of their strategy to meet their requirements under the Plan.

Whether through funding basic research to improve renewable energy sources, developing advanced power generation technologies, providing financial incentives to move new technologies to market, using its own purchasing power to advance the diffusion of renewable electricity, helping remove barriers to faster and broader deployment of technologies, or providing job training to help Americans fill high-paying jobs in this sector, the Administration’s programs and policies for renewable energy, which have resulted in the significant growth of renewable electricity generation over the past 7 years, can be expected to continue to accelerate the rate at which these resources contribute to America’s clean energy leadership in 2016 and beyond.

Bob Simon is the Principal Advisor to the Director for Energy, Transportation, and Resources for the White House Office of Science and Technology Policy.