Live from the East Room of the White House, YouTube creators Ingrid Nilsen, Destin Sandlin of "Smarter of Everyday," and sWooZie sat down with President Obama to discuss the issues that they and their fans care the most about. During the conversation, the President spoke about community policing, investments in space exploration, and the future of LGBT rights in America. He also weighed in the properties of the element "Obamium" and shared the stories behind some of the trinkets in his pocket today.

This interview continues our efforts to meet people where they are -- and make it possible for people around the country to watch and engage with the State of the Union in new ways. Check out the conversation with Ingrid, Destin, and sWooZie about the year ahead and the issues that will shape our country in the generations to come. 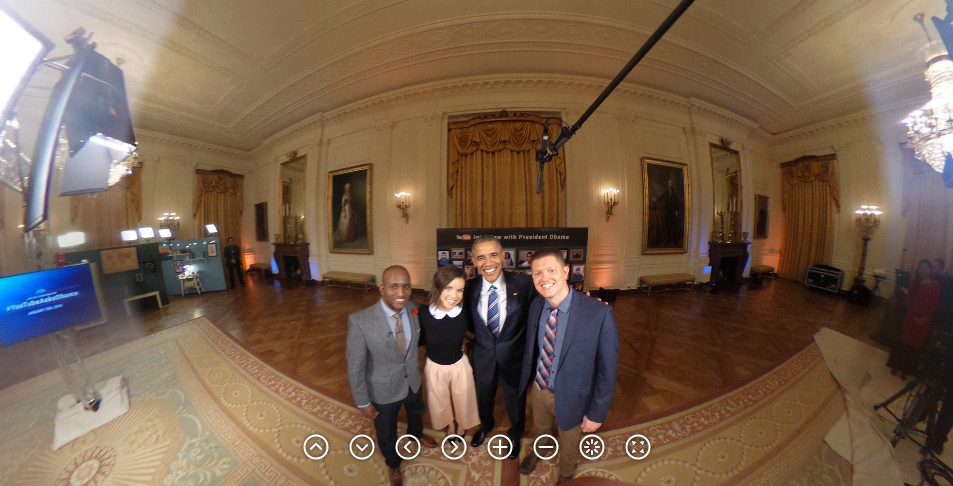 Watch the full video here and check out a few excerpts below:

President Obama on a Moonshot to Cure Cancer

Ingrid Nilsen: "Something that I heard you talk about in the State of the Union that you want to work on is cancer and cancer treatments. Because my mom is actually a cancer survivor, and so when I was watching the State of the Union, I actually ran back to my iPad when you mentioned that you want to cure cancer. And that’s a big thing to say, and I want to know, how close are we to finding a cure and can our government really do something about it?"

President Obama: "Well, I think we can do a lot. Look, my mom died of cancer when she was younger than I am now. It’s great that your mom is a survivor.  Vice President Biden obviously has just gone through a terrible situation where he lost his son to cancer, Beau Biden. Every family has been touched by this at some point.

It’s not going to happen next year or even five years from now. On the other hand, I think it is entirely possible that over the next 20 years, we see the kinds of strides in fighting cancer that we haven’t seen before. And the reason is, is because the human genome, our understanding of how cancer cells develop, the fact that we now recognize that different cancers may react differently to different medicines and even the same cancer may react differently if it’s in you versus if it’s in me -- all allows us to really start honing in and breaking down the elements at the base level that creates new cures.

And the key for us now is to put a lot more money into research, a lot more money into science. What I was talking about at the State of the Union, we’ve already increased the National Institute of Health’s budget for this area, but we can definitely continue to do more, and I want to make sure that we sustain those levels of cancer research.

If we do, I think we’re going to see some really big breakthroughs soon. And obviously that would have a revolutionary impact on the lives of people every day. By the way, some of this research is also directed at things like Alzheimer’s and Parkinson’s -- debilitating diseases that, as we learn more and more, we think that we may end up having an impact on it."

Destin Sandlin: "I asked Reddit what I should ask you. You have the top 'ask me anything' of all time, so you’re very familiar with Reddit. So one question that came up is, if there was an element named after you, Obamium...what would you want the physical properties [to be]?"

President Obama: "That’s interesting. Well, I would want it to be stable....I would want it to be a catalyst, but one that didn’t get too hot or too cold....and hopefully it would be one that was useful to humanity, that we could actually use, and wasn’t just some shiny object that somebody liked."

sWooZie: "As a black male who wears his hat backward from time to time, I get racially profiled. The most recent story I have for you is driving, pulled over to send some text messages, cop pulled up behind me, called for backup, they’re all over me harassing me for my I.D., registration. Third cop is driving by kind of just like -- you know, I get harassed often. I’ve learned to live with the harassment, but people are dying now. I can’t sit by and let that happen...So I really want to know is [about police] accountability.What can you do with your time left? What can the government do with the time left?"

President Obama: "Well, first of all, I’m a black man who sometimes wears his hat backwards. And there have been times when I was younger when I was stopped for reasons that I wasn’t always clear about. But I think it’s also important for us not to completely generalize. Now, the overwhelming majority of law enforcement officers are doing a really tough job, and they’re doing it well. And they’re respectful and they’re doing it the right way. It is absolutely true that there’s always been pockets of police misconduct around the country, and we have to take that seriously. And what’s happened is not that this is new -- if you talk to anybody who is a little bit older and was African American in Chicago or New York or any place else back in the ‘50s, ‘60s, ‘70s, I promise you, it was a lot worse. So it’s not that the situation has gotten worse -- it’s that our awareness has increased.

And what we have to do -- and I put together a task force that included both police officers and police chiefs, but also folks who were organizing protests in Ferguson to come together. We put together a task force to get specific recommendations on how we could really deal with this in a serious way: Better data collection, body cameras, better training -- a whole package.  The problem is, is that most police departments, sheriff departments, those are individual jurisdictions.  They don’t fall just under federal control.

So I can’t order all these reforms to be implemented, but what we’re trying to do is incentivize all these cities, counties to adopt these practices because when they do, not only is it good for the communities who finally feel like they are being well served and respected, but it’s also good for the police officers because they have an easier time doing their job if communities trust them."