The unemployment rate has been cut in half since peaking in 2009 and the number of Americans looking for work for more than six months is almost 90 percent of the way back to its pre-recession average. The last two years have seen the strongest private-sector job growth since the 1990s and the fastest annual average unemployment rate decline in three decades. As our labor market continues to heal, we have an ideal opportunity to strengthen some of our labor market institutions and address underlying long-term challenges that workers and businesses have faced as our economy has changed during the past several decades. That is why – following his call to expand Americans’ economic security in his State of the Union earlier this week – the President is announcing new proposals to strengthen and modernize our unemployment insurance system, including by providing wage insurance. His proposals will better position the unemployment insurance system by increasing support to unemployed workers and expanding access for part-time, temporary, and low-income workers, but also preventing job losses by encouraging job sharing. New initiatives will also facilitate training and transitions back to employment by providing workers with wage insurance and letting workers receive benefits while they re-tool for new jobs.

A New Proposal to Protect Against Income Losses

Aiding the unemployed is good for our economy: CBO found that aid to the unemployed is among the most effective policies for improving output and employment. But current aid largely takes the form of income transfers during unemployment, rather than policies to help workers transition back into the labor force. Given the low job-finding rate for the long-term unemployed in particular, it is vital that we target more government policies towards helping the unemployed transition into their next job. This is especially important given the long-lasting consequences of long-term joblessness, as those who exhaust their benefits are more likely to drop out of the workforce altogether.

That’s why the President has proposed providing wage insurance to protect workers from the income loss that too often comes with having to start over. Research shows that on average, experienced workers starting over find themselves earning wages 10 percent or more below what earned in the jobs they lost; and workers with more than twenty years of experience in their prior job face wages that are nearly a quarter less than what they made before.

These hits to workers’ paychecks can persist for years: workers often face lower wages for five to six years after job loss. Wage insurance partially offsets wage losses for workers taking a new job that pays less than the job they lost, and it can help transitioning workers make ends meet on their new salary while working their way up the ladder at their new firm.

In addition, with wage insurance, workers may be better able to take a new job rather than waiting and ending up in long-term unemployment. Research shows that the long-term unemployed have a 20 to 40 percent lower probability of being employed 1 to 2 years in the future compared to the short-term unemployed, so helping workers take a new job sooner rather than later is critical to ensuring that they can continue to support themselves and their families. Evidence suggests that workers transition out of unemployment more quickly when they have wage insurance: a Canadian experiment showed that wage insurance increased entry into full-time work by 4.4 percentage points at the 26-week mark. This is particularly important given that today workers who become unemployed tend to remain unemployed for longer than they have in the past.

In addition to providing financial incentives for workers to transition into new jobs, the President is proposing to make it easier for workers to retool and retrain. The Administration’s proposals include incentives for states to let workers continue to receive unemployment insurance benefits while participating in an apprenticeship or on-the-job training.

As part of providing training, we need to ensure that workers are investing limited time and money in training that will get them a new job and a better job over time. Too often workers lack the information necessary to make smart choices about training. That’s why the President is proposing new Career Navigators who will proactively reach out to all long-term unemployed workers, those who are only able to find part-time work, and those who have dropped out of the labor force altogether to help them find a job, match them with a good training program, and navigate federal services to support them. This proposal will expand intensive counseling services to more than 1 million people annually. Intensive counseling services have been shown to increase recipients’ earnings and decrease the time they spend unemployed. An evaluation of a program in Nevada found that it increased recipients’ earnings by $2,611 over the next 18 months and that it reduced the time participants spent unemployed by 3.1 weeks.

In addition to providing new aid to the unemployed, the President’s proposals would ensure that workers who lose their jobs can access traditional unemployment insurance. In recent years, the share of jobless workers who receive unemployment insurance has been steadily eroding. For the first time in half a century, nine States have reduced the maximum amount of time that unemployed workers can receive benefits to less than six months, shutting out many of the unemployed entirely: around 40 percent of workers exhaust their regular benefits before they can find a new job. In addition, part-time workers and low-income earners can have difficulty accessing the unemployment insurance system because of income and length of employment requirements. And with women more than twice as likely to work today as they were when unemployment insurance was first introduced in the 1930s, the system still does too little to recognize the demands on caretakers who need to leave their job for family reasons.

The President’s proposals follow through on the work done of the American Recovery and Reinvestment Act of 2009. Under that act, this Administration provided additional aid through the unemployment insurance system by ensuring that more workers had access to benefits and that the size of those benefits was increased. Over 30 states took up incentives for unemployment insurance reforms in the Act and made sustained changes like extending eligibility to workers who left their job for compelling family circumstances and adding coverage for domestic violence, for caring for a sick family member, and for a relocating spouse. These new proposals would now require that workers who currently fall through the cracks (including part-time workers, intermittent and newer labor market entrants, certain low-income earners, and workers who leave work for compelling family reasons such as to move with a spouse, escape domestic violence, or care for an ill family member) would be covered.

It is also important to ensure that our unemployment insurance system is prepared to respond to future economic contractions. With the economy in better shape today, it is a good time to prepare for future contingencies by making sure that unemployment insurance—one of our frontline defenses for workers who lose their jobs and a key automatic stabilizer for our broader economy—is more responsive to economic conditions. From 2008 to 2013, extended unemployment insurance benefits helped nearly 24 million workers, lifting 2.5 million people out of poverty in 2012 alone. 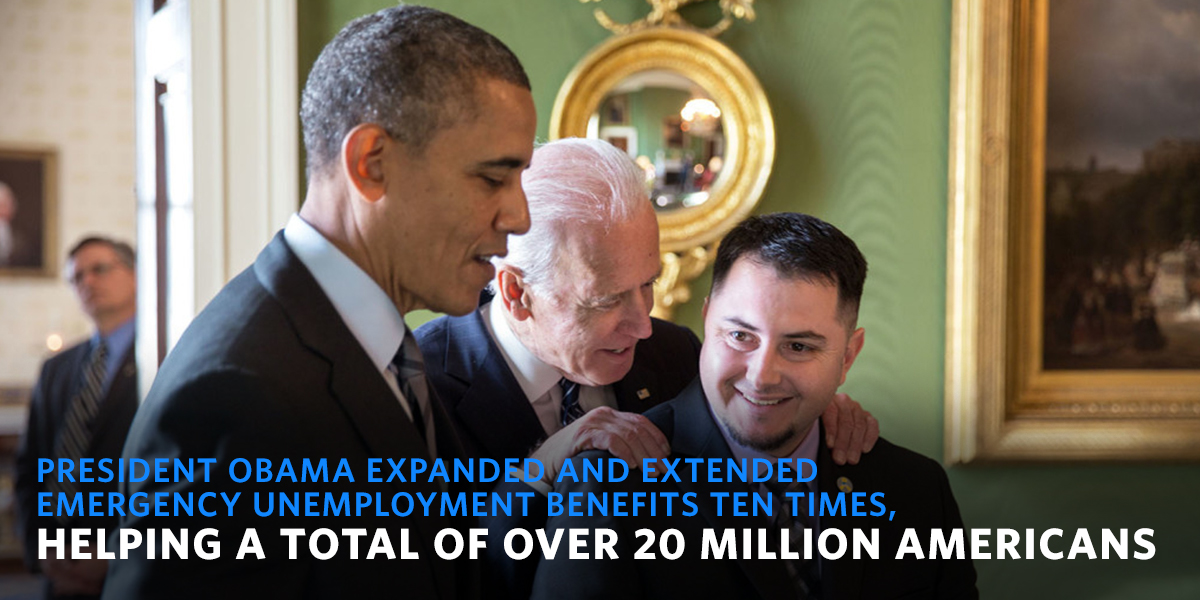 These increases in unemployment insurance helped maintain household income: from 2007 to 2010, the share of households receiving income from unemployment compensation rose from 4.1 percent to 9.6 percent and the average amount received by these households increased from $4,400 to $8,343. But ten acts of Congress were required to expand and extend these benefits as the economy continued to heal. If our economy went into recession tomorrow, that extra help would not be there for workers without waiting for action by Congress.

Of course, no worker wants to become or stay unemployed, and it is important to take action to prevent workers from losing their jobs in the first place. Work-sharing, otherwise known as short-time compensation, can help avoid mass layoffs by allowing workers to claim unemployment benefits if their hours are shortened. That is why the President’s unemployment insurance proposals include incentives for states to give employers access to work-sharing programs that will encourage employers to reduce hours instead of laying off workers while providing partial unemployment benefits to workers whose hours are cut.