January 20, 2016 at 2:01 PM ET by Laura Miller
Twitter Facebook Email
Summary:
President Obama is in Detroit to showcase the resurgence of the city and the American auto industry. 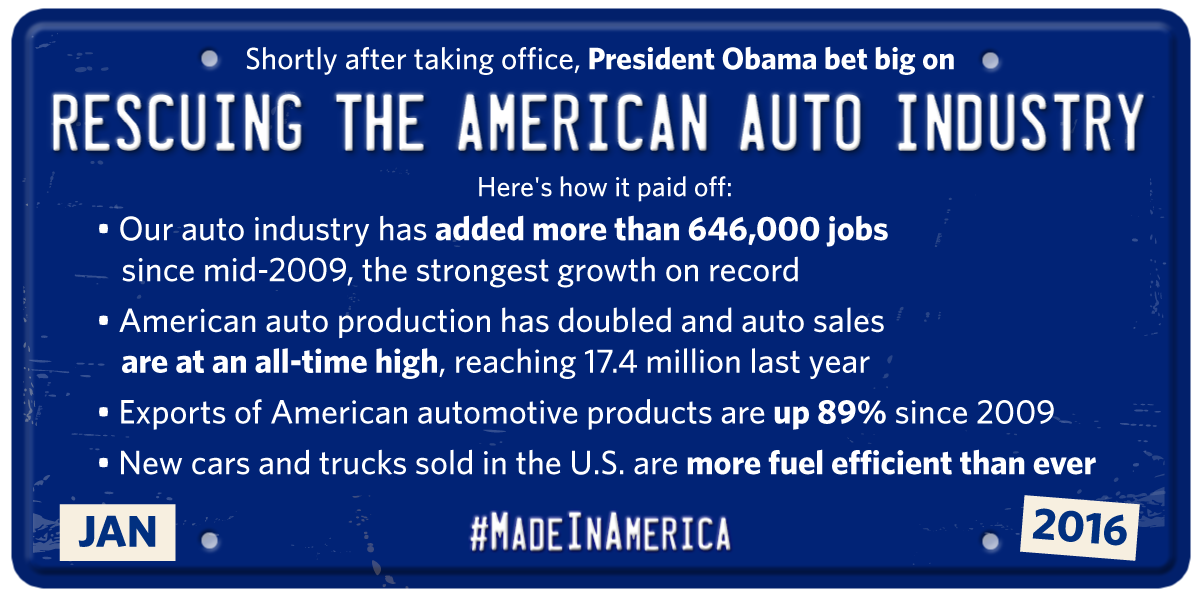 Seven years ago when President Obama took office, we we're experiencing the worst economic crisis since the Great Depression: hundreds of thousands of Americans were losing their jobs, their homes, and their savings. This was the case for jobs across America, particularly in the heart of the Midwest in the Motor City. President Obama made the tough call within his first few months in office to place a bet on American workers and American manufacturing—and to place a bet on Detroit—by providing temporary Federal assistance to rescue the American auto industry. He also initiated a broader commitment to the City of Detroit.

Today, America is in the middle of the longest streak of private-sector job creation in history.

Manufacturing has created nearly 900,000 new jobs in the past six years and the auto industry had its best year ever in 2015. But there’s more work to be done to ensure a growing economy that works for all Americans.

To highlight this progress, President Obama is visiting Detroit to experience firsthand the remarkable progress made by the American auto industry, the city, and its people and neighborhoods.

Check out the highlights on the progress we've made to date:

President Obama is touring the Detroit Auto Show to help showcase the resurgence of the American auto industry.

Check back for updates

Detroit’s challenges were decades in the making and will not be resolved overnight, but this collaboration has led to some notable and steady progress.

Now: Detroit neighborhoods fully lit 59,000 out of 65,000 new streetlights with LED lighting, saving nearly 46 million kilowatts of energy every year, and resulting in nearly $3 million annual cost savings in electricity for the city.

Then: The Detroit City Bus Service couldn't run a full schedule with only 138 working buses (out of 188).

Cecilia Muñoz, Director of the Domestic Policy Council and Detroit-native, is taking over the White House Instagram while on the ground in the Motor City. Follow along!

Hi everyone! Cecilia Muñoz here, White House Domestic Policy Director and Detroit native. Today, I'm in the Motor City with President Obama as he heads to the Auto Show to highlight how the American auto industry has made a roaring comeback. I'm excited to be back in my home city touring the neighborhoods with Mayor Mike Duggan to get an up close and personal look at the remarkable progress made by this city and its people. The White House and twenty federal agencies have been working with the Mayor, his team, and other local partners to bring back this great city. Stay tuned for more to come throughout the day! #DetroitComeback –Cecilia

Laura Miller is the Deputy Director of Online Engagement.