Last Friday, as Washington DC shut down for “Snowzilla,” the White House celebrated the two-year anniversary of the Task Force to Protect Students from Sexual Assault.

Since its creation, the Task Force has accomplished a great deal, developing a number of resources for schools to adapt and use as they address the unique circumstances and needs of their distinct campus communities. In its 2014 Not Alone report, the Task Force shared these resources and sample documents, and also urged schools to conduct their own campus climate surveys, so that each school could measure the prevalence of sexual assault among students and enhance prevention and response efforts.

We hit another major milestone last week when the Bureau of Justice Statistics, with RTI International, partnered with the Department of Justice Office on Violence Against Women (OVW), and published a major study in which they further refined the Task Force’s 2014 toolkit for conducting sexual assault climate surveys. The complete report on the results of this new study, the Campus Climate Survey Validation Study (CCSVS), can be found here.

The CCSVS: Finding a Solution Requires Understanding the Problem

The CCSVS report provides data on prevalence of sexual harassment, sexual assault victimization, and intimate partner violence on nine college/university campuses. By carefully selecting the participating schools, the research scientists who conducted the survey were able to offer variation in terms of size, public vs. private status, two- vs. four-year, program length, and geography. Surveys were completed by more than 23,000 undergraduate students (approximately 15,000 females and 8,000 males), and the average response rate across all nine schools was 54% for females and 40% for males.

Let’s examine each of these ideas in a bit more detail.

The CCSVS report presents findings that support and expand upon prior studies of campus sexual assault prevalence. The researchers found that, on average, 21% of female students surveyed at the nine schools had experienced a completed sexual assault since entering college—though rates at each of the nine schools varied significantly, from 12% to 38%. A second, related finding, was that approximately 25% of fourth year female undergraduates attending four year schools had experienced sexual assault since entering college. These statistics affirm statistics previously discussed in the Not Alone Report—and show the problem may actually be more serious than previously measured.

Students’ confidential, self-reported data that is reflected in the CCSVS paints a very different picture than official statistics. For instance, the CCSVS chart below indicates that 2,380 student respondents experienced a completed rape in the 2014-15 school year, though only 170 student respondents—or  7%— reported the rape to school authorities. 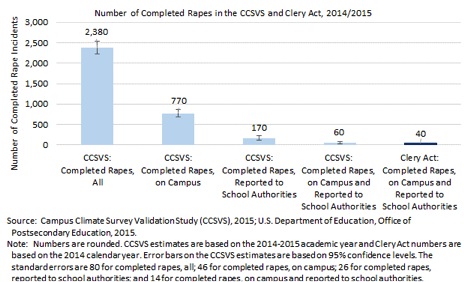 So what’s the key takeaway from the CCSVS? Each campus can and should conduct its own campus climate study, in order to have a comprehensive understanding of how sexual violence is impacting its students. Fortunately, BJS has created an updated survey instrument, so that all campuses can begin implementing their own surveys after reading the report.

Changing the Culture: It's On Us

Because climate surveys allow schools to understand the particular nature and dynamics of sexual assault and intimate partner violence on any given campus, they are a critical ingredient in changing a culture on college and university campuses that tolerates, condones, or even promotes sexual assault. Such culture change is the ultimate goal of the Task Force to Protect Students from Sexual Assault and the It’s On Us campaign, described below.

In November, as part of the It’s On Us Week of Action, Vice President Biden traveled to four college campuses – the U.S. Naval Academy, Clemson University, Morehouse College, and Syracuse University – to send this very message. He exhorted students and administrators “to change our culture on … campus to understand no means no. No exceptions. No means no. Even if you start and you decide to stop. No matter when it’s uttered. And if she can’t say no, it is rape.”

It is on each one of us as individuals, and also on each college and university in this country, to accept responsibility and take action to end sexual violence on campuses.  By administering their own campus climate surveys, and then taking subsequent action to respond to the findings, schools across the nation can take an important step in this direction.

For more information about the CCSVS report, please visit:

Caira Woods, Ph.D., a senior women’s health policy advisor and former researcher, is a Policy Specialist in the Office of the Vice President, on detail from the Department of Health and Human Services.