February 5, 2016 at 9:30 AM ET by Jason Furman
Twitter Facebook Email
Summary:
In January, the unemployment rate fell below 5 percent for the first time in eight years as the longest streak of private-sector job growth on record continued.

The unemployment rate reached 4.9 percent in January for the first time since February 2008, and the labor force participation rate has been essentially stable over the past year. Just two years ago, many economists expected the unemployment rate to remain above this level until 2020. Our businesses added 158,000 jobs in January, somewhat below the pace of recent months but well above the pace necessary to maintain a low and stable unemployment rate. Most importantly, wages rose 2.5 percent over the past year, and the 2.9-percent annualized pace over the past six months is the strongest since the recovery began. Nevertheless, more work remains to drive further job creation and faster wage growth, including passing the President’s new proposal for ambitious investments in 21st-century clean infrastructure, opening our exports to new markets with the Trans-Pacific Partnership, and raising the minimum wage.

FIVE KEY POINTS ON THE LABOR MARKET IN JANUARY 2016

1. Businesses have now added 14.0 million jobs over 71 straight months, extending the longest streak on record. Today we learned that private employment rose by 158,000 jobs in January, while private employment growth in November and December was revised up by a combined 15,000 jobs. Total nonfarm employment rose by 151,000 jobs in January, somewhat below the pace of recent months but well above the pace necessary to maintain a low and stable unemployment rate, which CEA estimates at 80,000 per month. The unemployment rate reached 4.9 percent for the first time since February 2008, as the labor force participation rate edged up to 62.7 percent, the same level as in March 2015. Over the last six months, average hourly earnings for all private employees rose 2.9 percent at an annual rate, the fastest pace since the recovery began. Over 2014 and 2015, the private sector added 5.5 million jobs, the most in any two-year period since 1999. 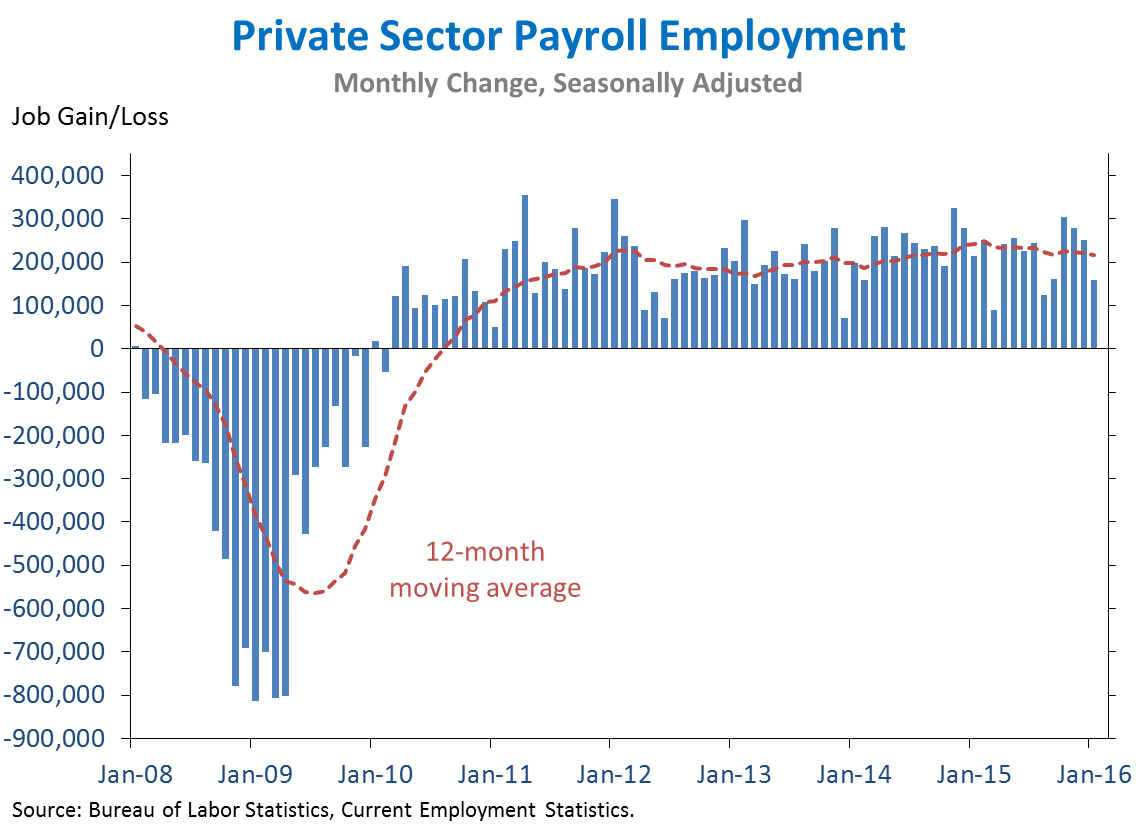 2. Initial estimates job growth and GDP growth have been especially disconnected in the current recovery. In general, stronger quarterly job growth is associated with stronger quarterly GDP growth. This pattern was consistent in expansions from the 1960s until 2001. But the current recovery, initial estimates of quarterly job growth and quarterly GDP growth have been much less closely correlated. This disconnect was especially clear in the fourth quarter of 2015, when GDP growth was 0.7 percent and employment growth was initially estimated to be 2.4 percent. While such discrepancies are in part due to fluctuating productivity growth, measurement error is likely playing a role. This illustrates the importance of focusing on a wide range of indicators – especially labor market data, which tend to be less noisy – in assessing the health of the economy. 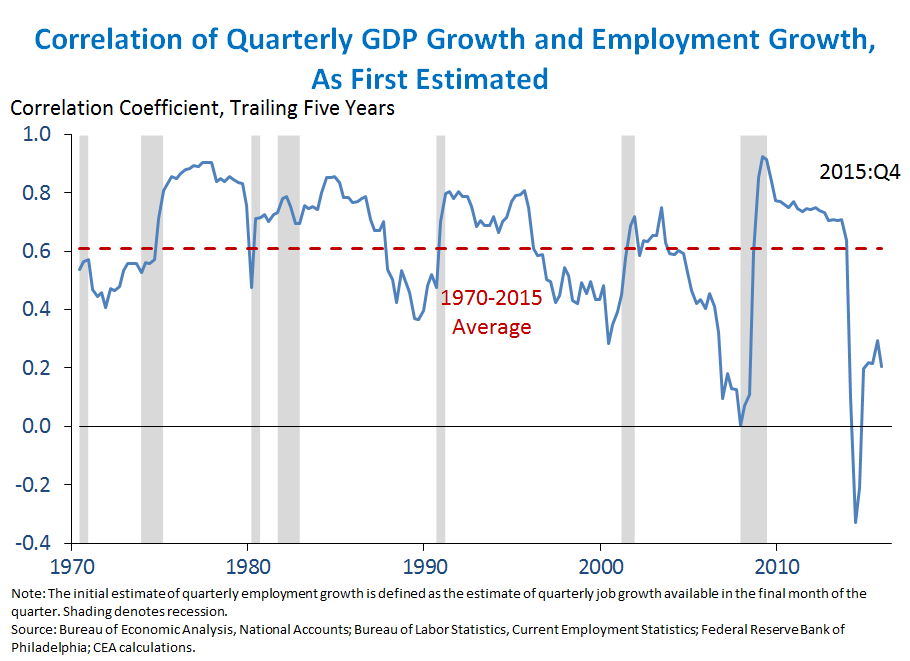 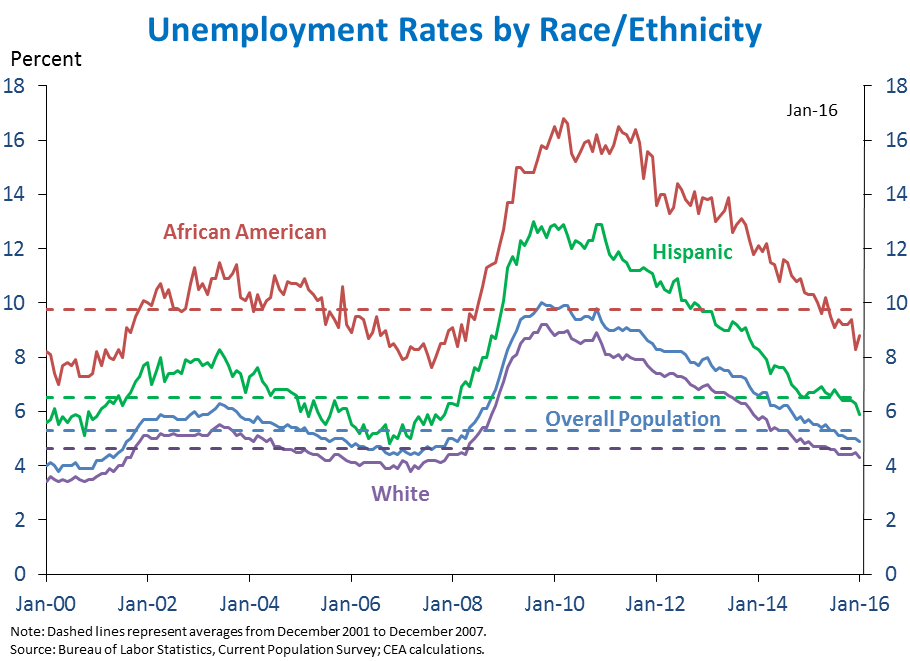 4. While rates of hires and separations have risen in the recovery, a long-run trend of declining labor market “churn” remains. The most recent data from the Job Openings and Labor Turnover Survey (JOLTS) show that the private-sector hires rate—the total number of hires by businesses as a share of total employment—has continued to trend upward since the end of the recession. The private-sector separations rate has shown a similar pattern, as workers are more likely to choose to leave their jobs when the economy is stronger. Despite these recent increases, a number of measures of labor market fluidity, including hires and separations rates, have been on a downward trend for decades. Hires and separations rates both stood at 4.5 percent in late 2000 and each averaged 4.2 percent in the previous expansion period, but stood at 4.0 and 3.8 percent, respectively, as of this past November. This decline in fluidity could reflect greater job stability and better matches between workers and firms. At the same time, reduced churn could limit workers’ ability to realize the wage gains that often come from switching jobs. More research is needed to understand both the causes and consequences of reduced labor market fluidity over the long run. Nevertheless, the increases in both hires and separations rates in the current recovery are yet more indicators of the increasing cyclical strength of the U.S. economy. 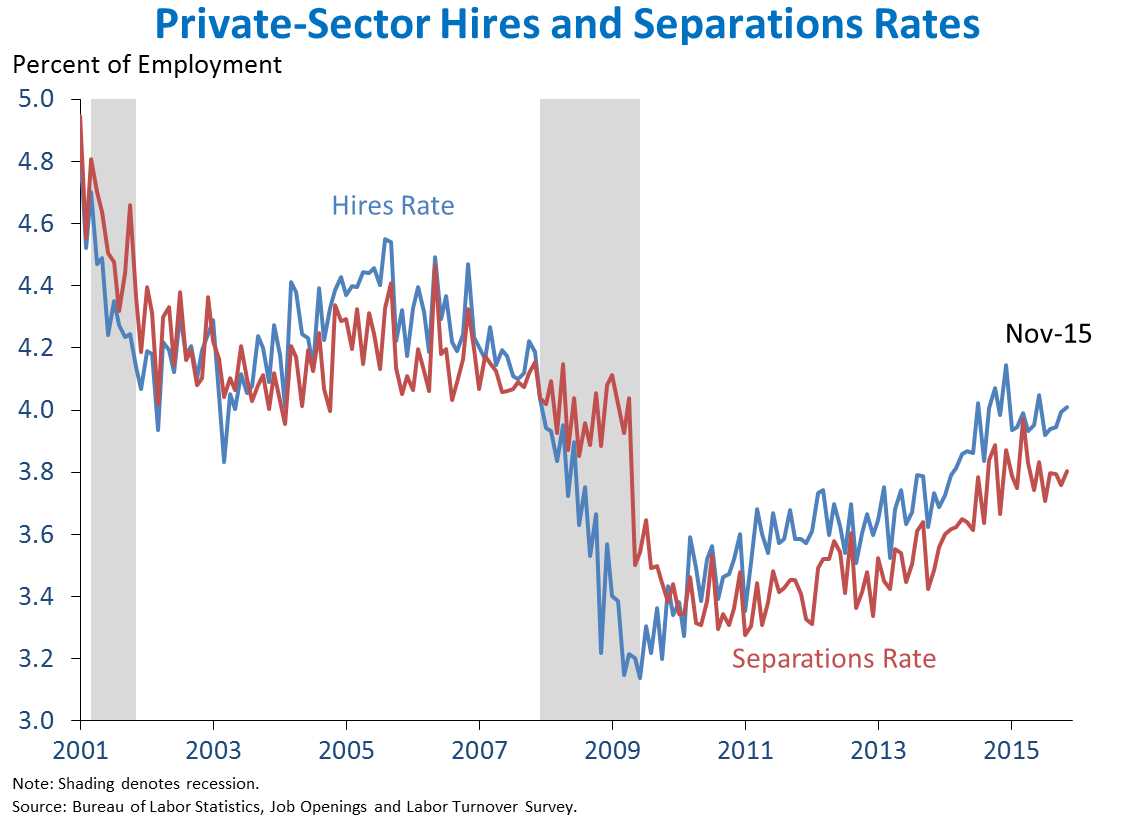 5. The distribution of job growth across industries in January diverged sharply from recent trends, with strong growth in sectors including manufacturing but other sectors reporting below-trend changes in employment. Both manufacturing (+29,000) and retail trade (+58,000) saw their strongest growth in the past twelve months, while financial activities (+18,000) and wholesale trade (+9,000) also saw notable above-trend growth. Mining and logging (-7,000) saw a moderation in its decline, though low commodity prices continue to weigh on the sector. At the same time, utilities (-300), transportation and warehousing (-20,000), and private educational services (-39,000) all saw weaker-than-average job growth. Across the 17 industries shown below, the correlation between the most recent one-month percent change and the average percent change over the last twelve months was 0.49, below the average correlation over the previous three years. 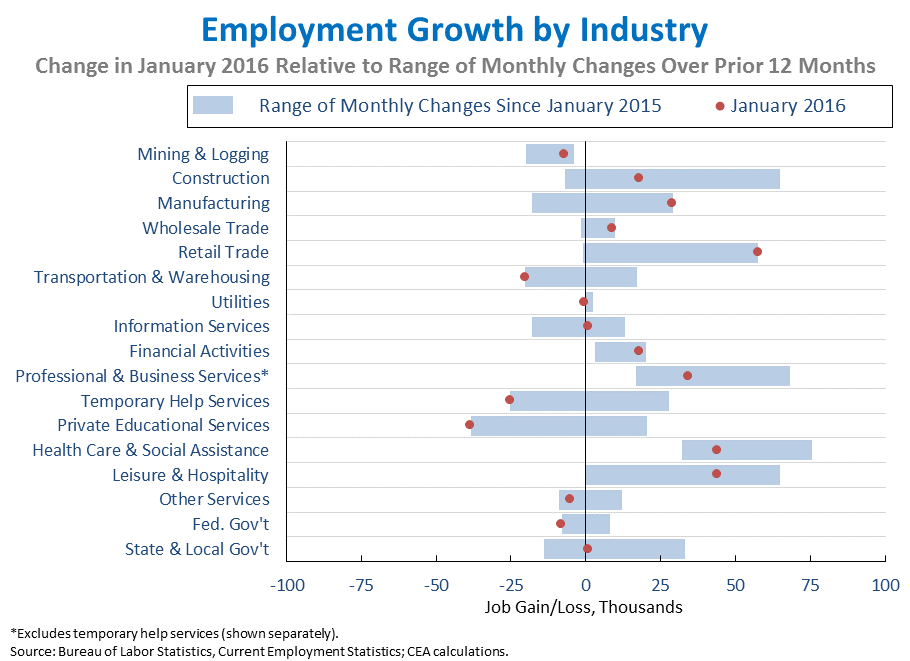