Welcoming New Americans Deep in the Heart of Texas

As native Texans, we take great pride in the generations of immigrants and refugees that helped build the state’s thriving economy and shape our unique Texas culture.  It always feels good to come home and be greeted by Texans’ warmth and friendliness. At yesterday’s second White House Regional Convening on New Americans, we were reminded that Texas communities continue to live up to their finest tradition of extending a big Texas welcome to all newcomers, including immigrants and refugees.

The White House Task Force on New Americans worked with the White House Initiative on Educational Excellence for Hispanics to bring this Regional Convening to Houston, along with the U.S. Citizenship and Immigration Services (USCIS) Houston District Office, the City of Houston, and Neighborhood Centers Inc. It is part of a series of convenings that will be held across the country and aim to highlight best practices and broaden and deepen local multi-sector partnerships to advance civic, economic and linguistic integration efforts.

Houston, one of 48 cities and counties participating in the Building Welcoming Communities Campaign, provided a great setting for our second White House Regional Convening on New Americans. According to the Center for Public Policy Priorities, Houston has experienced a dramatic growth in its immigrant population. Today, 27 percent of Houston’s residents are immigrants, and one in five of all immigrants in Texas live in Houston. Houston’s immigrant communities hail from countries that span the globe; and they are helping to drive its economy, comprising 29 percent of the labor force and 31 percent of business owners.

The Regional Convening, which was hosted at Houston’s City Hall, began with opening remarks from Houston Mayor Sylvester Turner, who proclaimed February 18th as “Welcoming Houston Day.” Mayor Turner underscored how important integration efforts are to immigrants and refugees, but also to the larger community. U.S. Representatives Al Green and Sheila Jackson-Lee were also on hand to offer remarks and their support for the Regional Convening.

“Our focus is on how we can maximize our investment in Houston’s greatness—its people,” Mayor Turner said, “To excel in a twenty-first century economy in this vibrant city, where more than a quarter of the population is foreign-born, we must ensure that Houston’s social and economic opportunities remain open to all individuals and businesses. We must strong build bridges that connect our newest Houstonians and those who have lived here all of their lives.” 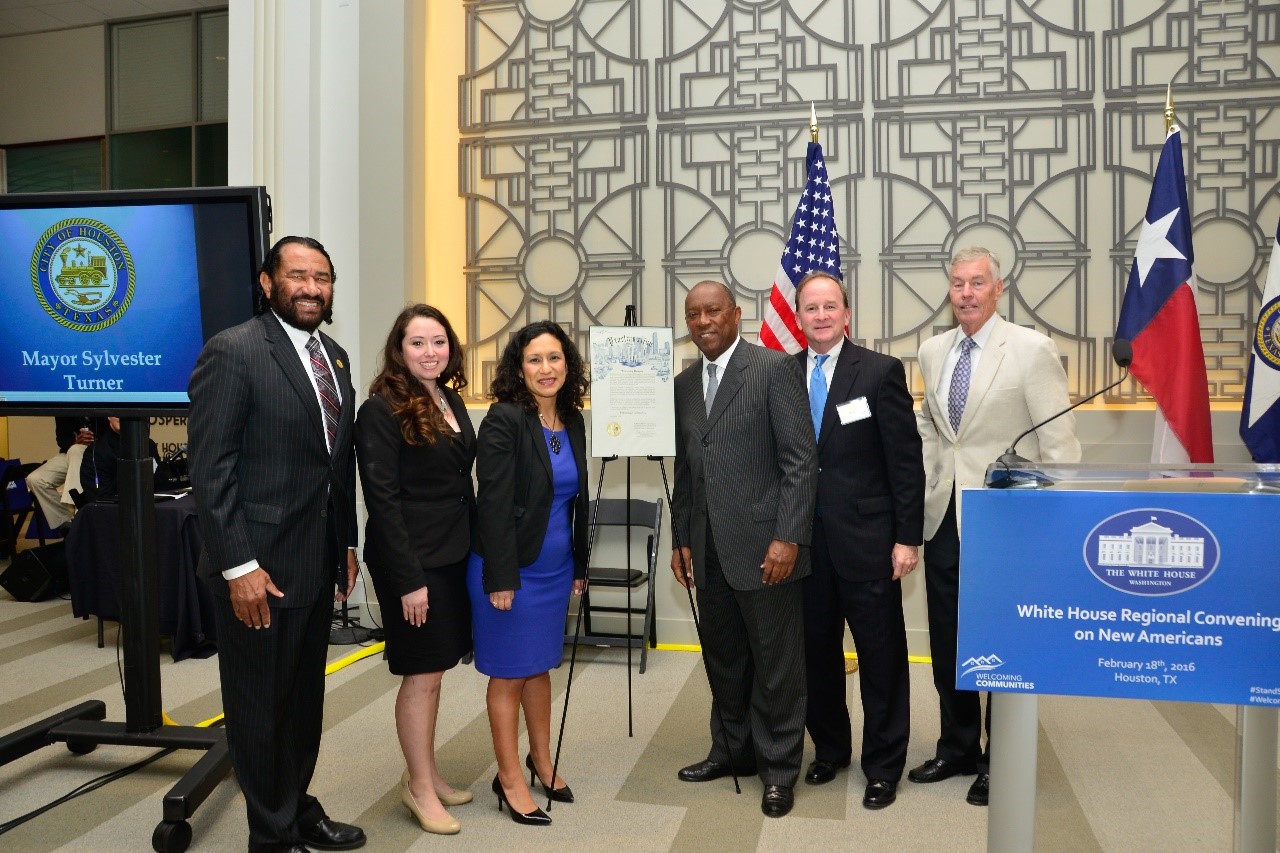 Photo Courtesy of the City of Houston’s Department of Neighborhoods

After hearing special remarks from Neighborhood Centers’ Vice President Melissa Noriega and getting an overview of Houston’s changing demographics from Rice University Professor Stephen Klineberg, participants heard from a panel of experts who highlighted current immigrant and refugee integration efforts in Houston. This was followed by breakout sessions, led by federal agencies and community leaders. 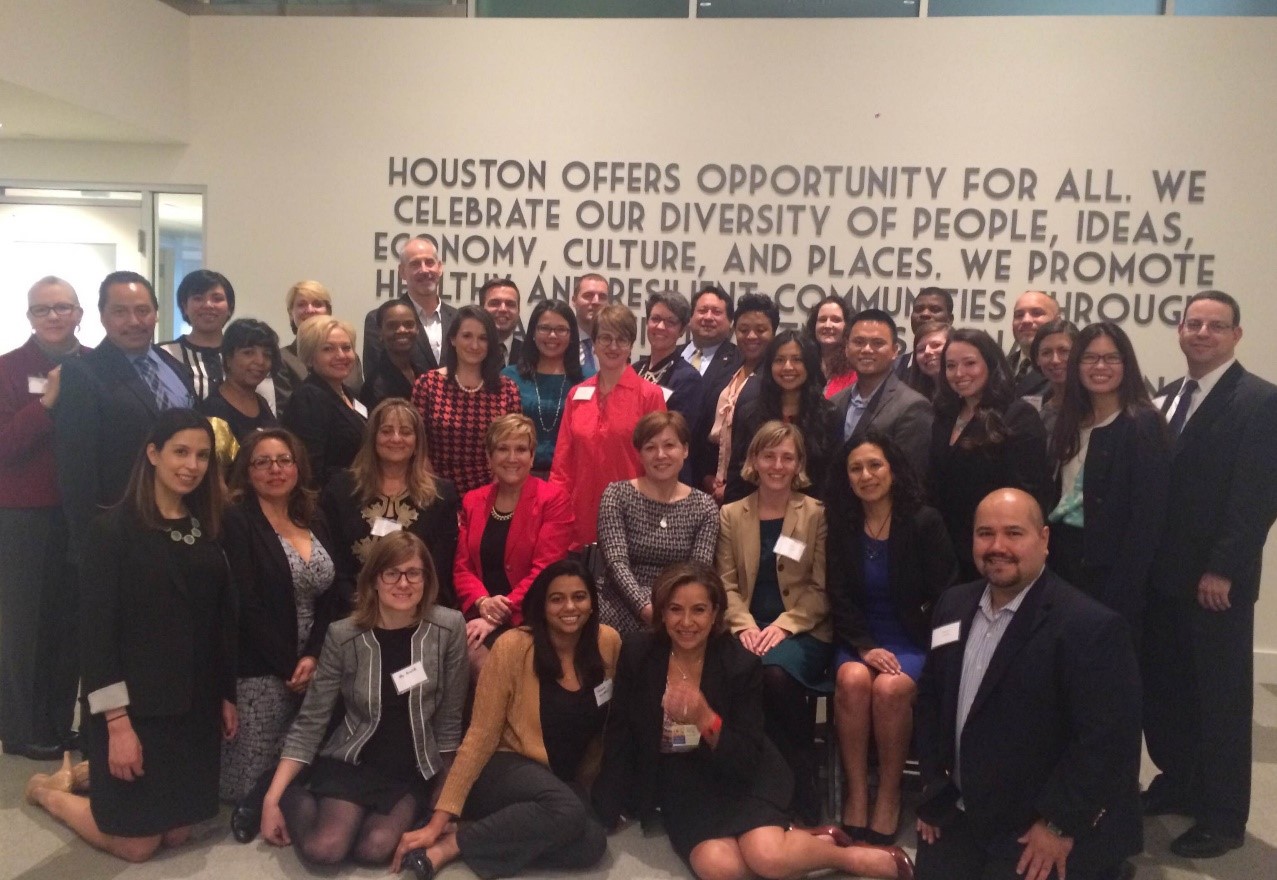 Photo Courtesy of the City of Houston’s Department of Neighborhoods

Across all sectors, Houston leaders are answering the Mayor Turner’s call to build bridges between new Houstonians and long-time residents. The Task Force looks forward to continuing the dialogue and deepening our work with all of the Houston leaders who attended the Regional Convening. And we look forward to working with the Houston Department of Neighborhoods’ Office of International Communities (OIC), which supports local integration efforts year-round. OIC administers the city’s language access initiative and recently launched the iSpeak Houston portal to promote public access to essential information and services in languages other than English.

The Task Force is coming to a city near you. Stay tuned as we continue our travels across the country.

For more information on the Task Force, visit https://obamawhitehouse.archives.gov/new-americans.

For more information on the Administration’s Citizenship Awareness Campaign, visit www.committocitizenship.org and www.uscis.gov/us-citizenship.

Check out a Roadmap guide to learn about ideas and resources to help build welcoming communities.

Felicia Escobar is Special Assistant to the President for Immigration Policy in the White House Domestic Policy Council.