The 2016 Economic Report of the President

February 22, 2016 at 11:00 AM ET by Jason Furman, Sandra Black and Jay Shambaugh
Twitter Facebook Email
Summary:
The ERP reviews the U.S. economy’s substantial progress and outlines key areas of focus that will ensure long-term growth is robust, sustainable, and shared.

The Council of Economic Advisers released the 70th annual Economic Report of the President this morning, reviewing the U.S. economy’s substantial progress in recent years and outlining the key areas of focus that will ensure our long-term growth is robust, sustainable, and shared. The U.S. economy has just completed the best two years of job growth since the 1990s and the fastest two-year decline in the unemployment rate since the 1980s while extending the longest streak of job growth on record. Consumers are more confident about the economy than they have been in over a decade, and wages are rising at the fastest pace since the financial crisis. The United States has substantial domestic strengths but faces headwinds from the global economic situation. It is critical to strengthen domestic growth by boosting our economy’s productivity and dynamism, to work with partners around the world to improve global growth, and to take steps to help ensure that the benefits of growth are shared—including by addressing the long-standing challenge of inequality. This year’s Report details the economics and the policies that surround that agenda.

Below are a few highlights from each of the seven chapters in this year’s Report:

Chapter 1 focuses on the President’s strategy to promote “inclusive growth,” to ensure the benefits of our economy’s resurgence reach all Americans. Despite marked progress for American households since the financial crisis, the unequal distribution of income, wealth, and opportunity remains one of the most important challenges facing the U.S. economy. Indeed, inequality is higher in the United States than in other large advanced economies, and it has grown faster in recent decades. Some inequality can be a natural result of competitive markets, reflecting differences in productivity that emerge as a consequence of technological advances and other trends. The President supports a range of policies to help all Americans succeed in the labor market by promoting equality of opportunity: such as investing in education, supporting children in low-income families, and ensuring a fair criminal justice system. But some inequality reflects cases where markets are not competitive in the first place, those distorted by “economic rents”—income paid to companies and workers beyond what their productivity justifies. The apparent increase in rents in recent decades and their increasingly unequal distribution contribute to overall inequality without boosting productivity—the opposite of inclusive growth. The President’s agenda fights this trend by reducing overall rents— through encouraging well-functioning competitive markets— and by dividing rents more equally through promoting worker voice and raising the minimum wage. 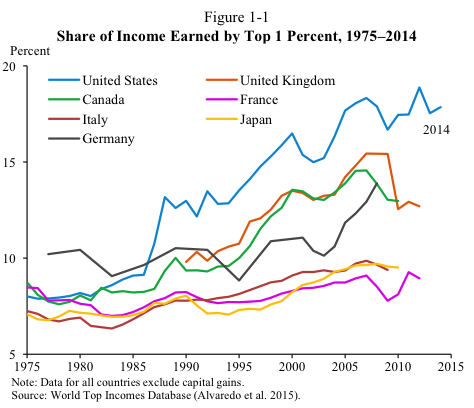 Chapter 2 reviews the macroeconomic performance of the U.S. economy in 2015, including strong labor market gains despite continued external headwinds. The unemployment rate fell to 5.0 percent at the end of 2015 (and 4.9 percent in January 2016), down by half from its crisis-era peak and now below its pre-crisis average. Domestic demand grew robustly—with personal consumption and fixed investment rising 2.7 percent over the course of the year. But external headwinds, including slower foreign demand, weighed on overall GDP growth, which increased 1.8 percent in 2015, down from 2.5 percent-growth in 2013 and 2014.  The sharp decline in oil prices was a major economic development in 2015 and CEA estimates that lower oil prices directly boosted real GDP growth by 0.2 percentage point during 2015, despite the adverse impacts on domestic energy producers and manufacturers that sell to the energy sector. More broadly, a critical challenge for the economy is raising productivity growth, which has been below its long-term trend during the recovery. As discussed in Chapter 2, the President has proposed a number of policies, such as immigration reform, public investments, tax reform, and expanding markets for U.S. exports that would increase productivity and living standards in the years ahead. 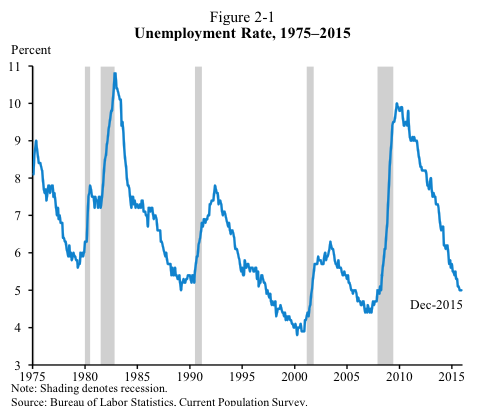 Chapter 3 reviews the global macroeconomic situation and its implications for the United States, including slowing foreign demand, disappointing global productivity growth, and shifting demographics. The International Monetary Fund (IMF) estimated that global growth in 2015 was 3.1 percent, the lowest since 2009. The United States had among the highest growth rates of any advanced economy and growth in the euro zone picked up slightly, but growth rates fell in a wide range of emerging markets. In recent years, global growth has consistently underperformed forecasts from the IMF and others. The biggest disappointments have been among large emerging markets. The Brazilian and Russian economies contracted sharply in 2015, while Chinese growth slowed to 6.8 percent over the four quarters of 2015—its slowest pace since 2009. China’s ongoing economic rebalancing, financial market liberalization, and exchange rate policy will continue to play a critical role in global economic performance in 2016. Global factors had an important impact on the U.S. economy in 2015, as the dollar appreciated sharply and export growth slowed sharply. This chapter reviews the sources of the global slowdown and discusses longer-term demand-side and supply-side challenges facing the global economy. 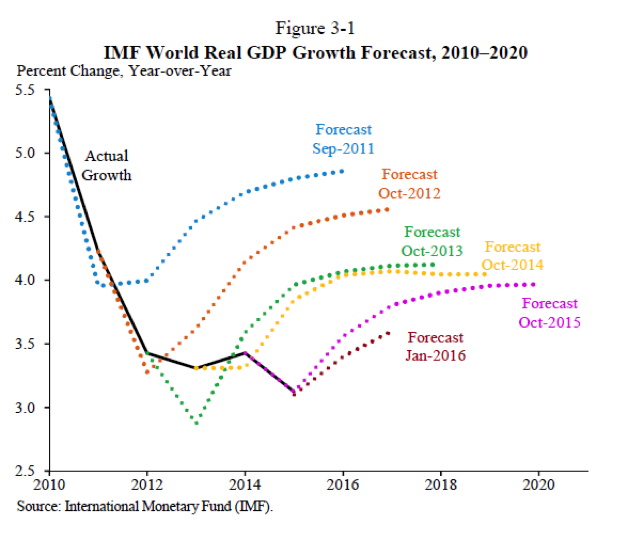 Chapter 4 focuses on disparities in opportunity that appear at an early age and the long-run benefits of investment in the education, health, and well-being of children. Children’s earliest years play a large role in determining later-in-life success through the health and human capital investments they receive during that time. Comparisons show persistent, large gaps in early health and cognitive skills of young children across household income, race/ethnicity, and family structure. This chapter explores how these early-life disadvantages contribute to later-in-life disparities in education, income, employment, health, and exposure to the criminal justice system. It reviews research demonstrating that direct investments in children—through programs such as nurse home visiting, early education, nutritional support, and health care coverage as well as indirect investments like income transfers to working families—can help to close gaps in these important outcomes and have lasting, positive effects. These long-run benefits help motivate the President’s agenda in this area, including ensuring access to pre-school education for all, making the expanded Child Tax Credit permanent, and expanding Medicaid. 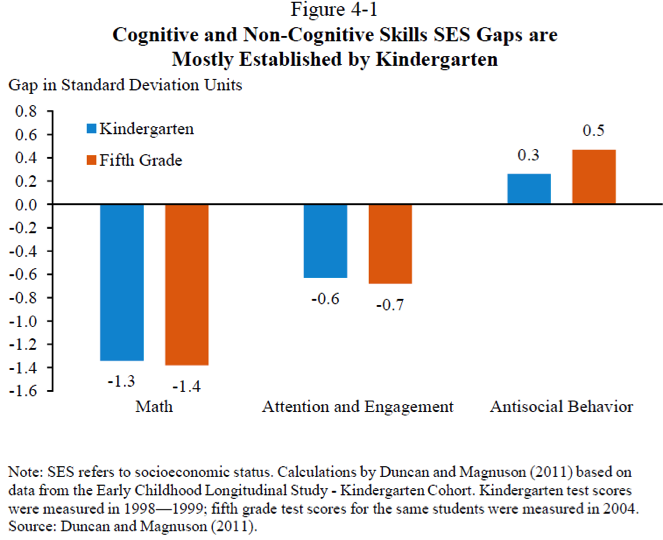 Chapter 5 covers a variety of developments in innovation, with attention to recent technological changes and their implications for productivity growth and workers. The chapter first discusses trends in innovation and the factors that underlie innovation—including the rate of patenting, the long-term declining trend in dynamism among firms and workers that may limit innovation, and recent strength in research and development investment that may counterbalance these forces. Against this backdrop, the chapter details how certain new technologies, particularly those involving robotics and automation as well as information and communications technology (ICT) present new opportunities and challenges for policymakers. For example, evidence suggests that occupations with higher hourly wages face a substantially lower likelihood of being automated. This association demonstrates the need to help workers develop strong skills through a robust training and education agenda to ensure that they benefit from changes in technology. More broadly, the increased prevalence of robotics, automation, and ICT has affected both worker welfare and overall productivity, highlighting the need for policies that promote their adoption while addressing distributional challenges such as the digital divide. Finally, the chapter also discusses the “on-demand” economy, including the substantial opportunities it affords but also some of the potential pitfalls. 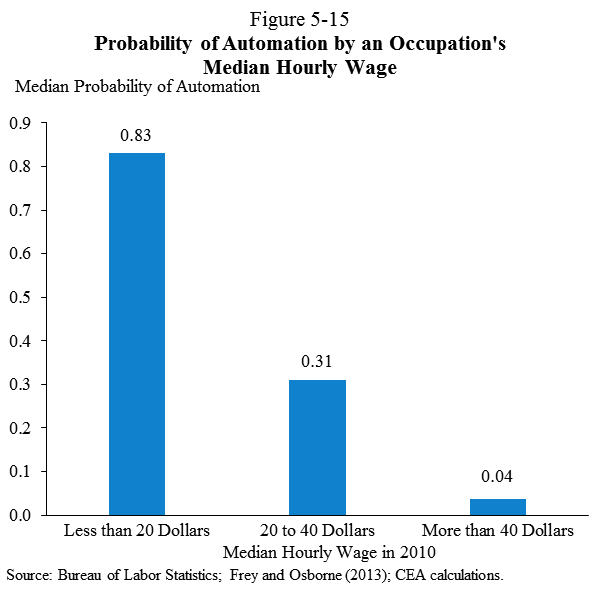 Chapter 6 turns to our Nation’s infrastructure and its importance for economic growth. The quality of U.S. infrastructure has deteriorated since the mid-2000s, and the aging of its public structures has accelerated in recent years. The decline in infrastructure quality coupled with the current low levels of long-term interest rates provides an important opportunity to boost Federal investment in infrastructure. Efficient infrastructure investment boosts the productive capacity of our economy along a number of dimensions: businesses can flourish from reduced production costs; households can consume more with lower maintenance costs and less time spent idling in traffic; and labor markets can become more integrated through improved access to new opportunities. A sound infrastructure plan can also protect the environment by supporting the use of clean and renewable energy to reduce carbon emissions. This chapter concludes with an analysis of the Fixing America’s Surface Transportation (FAST) Act—the first law enacted in more than a decade that provides guaranteed long-term funding for surface transportation—and the 21st Century Clean Transportation Plan, an important element of the President’s Fiscal Year 2017 budget that would increase investments in clean transportation infrastructure by roughly 50 percent. 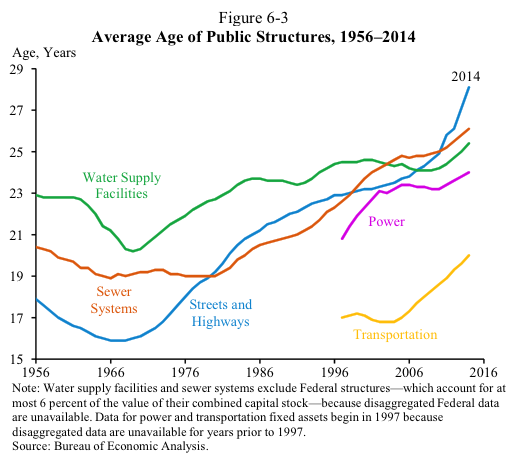 Finally, Chapter 7 reviews the history and role of the Council of Economic Advisers on its 70th anniversary. The chapter explores CEA’s core responsibilities and looks back at several key moments from its history. It first examines the legislative origins of CEA, provides an overview of its institutional structure, and describes how its policy focus has evolved over the years—from initially focusing almost exclusively on macroeconomic issues to, in recent decades, focusing more on a wide range of microeconomic issues like the functioning of labor markets, the regulation of the environment, and the incentives for innovation. The chapter then focuses on four interrelated functions of CEA: helping to develop economic policy; helping to advance the President’s economic agenda; gathering, analyzing, and interpreting information on economic trends and developments; and engaging with the economics community. The chapter draws on historical examples and former CEA chairs’ and members’ accounts—including contributions from six former chairs (Laura D’Andrea Tyson, Christina Romer, N. Gregory Mankiw, Joseph Stiglitz, Alan Greenspan, and Martin Feldstein) about their experiences at CEA—to illustrate each of these functions and their inherent challenges. Going forward, the chapter identifies several institutional lessons for ensuring CEA’s continued effectiveness.

Sandra Black and Jay Shambaugh are members of the Council.