Precision Medicine for a Healthier Future

February 26, 2016 at 11:07 AM ET by Dr. Jo Handelsman
Twitter Facebook Email
Summary:
Initiative aims to accelerate a new era of medicine that delivers the right treatment at the right time to the right person.

What if you found out that your child had a severe medical condition that doctors did not know how to treat? That’s what Matt Might discovered after he and his wife Christina noticed that their six-month-old baby could not produce tears. After seemingly endless tests, the Mights turned to researchers at Duke University who decided to look deep into the baby’s DNA. Through detailed genomic analysis, they discovered the underlying genetic cause. The family worked to create a community of people with similar genetic conditions, and that effort led to understanding which treatments could help their son’s condition. This example showcases the power of using data and genomics in healthcare.

Until now, most medical treatments have been designed for the “average” patient. As a result, many treatments are very successful for some patients, but not for others. To build a new era of medicine that is driven by big data and tailored solutions for all Americans, President Obama launched his Precision Medicine Initiative. This effort aims to harness new technologies and innovations to improve care, save lives, and bring American health care into the 21st Century.

At the White House Precision Medicine Initiative Summit, President Obama participated in a conversation with patients, researchers, technologists, and health experts focused on realizing the promise of precision medicine and accelerating its progress. Precision medicine uses the power of data to find trends about disease and health, which in turn suggest causes and treatments that are tailored to all patients who fit a certain data profile, leading to the right treatment for the right patient at the right time. This might mean choosing a cancer treatment based on the genetic make-up of a tumor. Or, it could mean patients using their own genome analysis to identify their vulnerability to common diseases like diabetes and then avoiding the disease entirely by modifying their nutritional status and lifestyle.

The Precision Medicine Initiative has made big strides already, uniting patients, research institutions, healthcare organizations, patient groups, technology companies, and privacy and security experts around common health challenges. In response to the President’s call, the White House announced new steps the government and organizations are taking to harness the power of precision medicine. The President’s Budget for the next fiscal year reaffirms the Administration’s commitment to the Precision Medicine Initiative with a $309 million investment, an increase of more than $100 million over this year. In addition, more than 40 organizations are making commitments that will accelerate the promise of precision medicine. 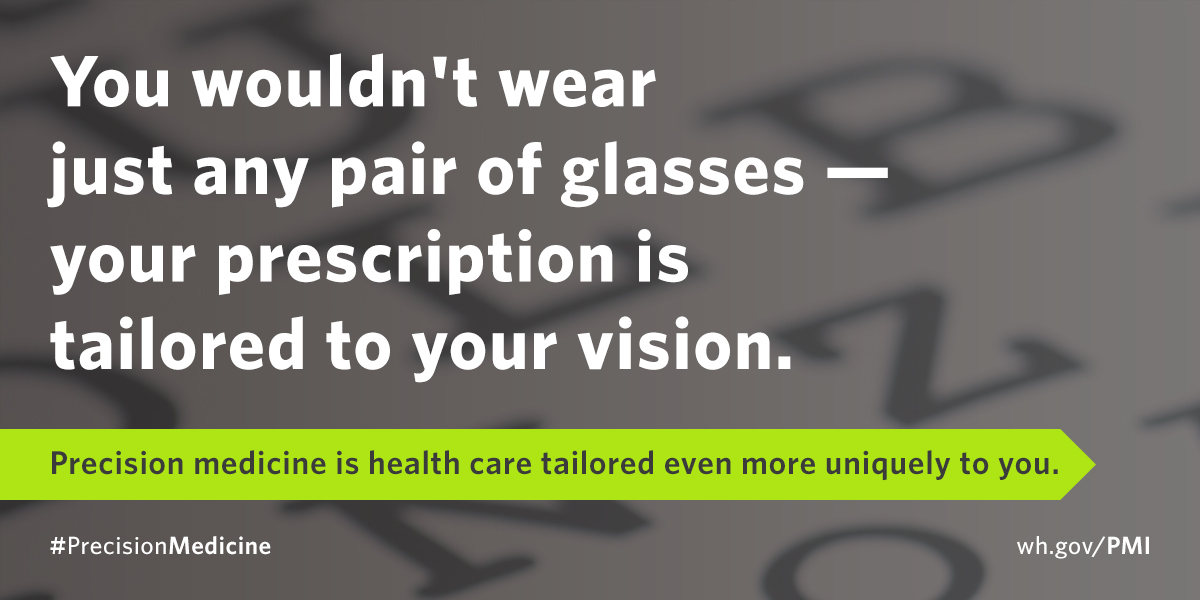 In the coming year, the National Institutes of Health will begin to build a research cohort that aims to recruit more than one million people to donate their health data to help researchers discover more about how genetics, lifestyles, and environments influence health. And the Department of Veterans Affairs is nearly halfway there with the Million Veteran Program, which has enrolled more than 450,000 Veterans. As part of these efforts, the Federal government is committed to ensuring principles of respect and responsibility are built into the foundation of the Precision Medicine Initiative.

So what’s next? First, we want to hear from diverse citizens about the terrific precision medicine going on around the country, so members of the government will be visiting places across the Nation to discuss opportunities for precision medicine and hear from communities. Second, we’ve released the Precision Medicine Data Security Principles for public comment as a first step to emphasize security in the Initiative from the start. And finally, precision medicine will benefit from engaging diverse patients in the design of research studies, so this year will be a time to initiate novel collaborations between researchers and citizens.

This effort can help transform the future of healthcare. Through a united effort of the public and private sectors, patients, health care providers, and researchers, the Precision Medicine Initiative will continue to create a world in which data, research, and partnerships enable people to live healthier, more satisfying lives.