March 3, 2016 at 9:49 AM ET by Melanie Garunay
Twitter Facebook Email
Summary:
President Obama visited Milwaukee, Wisconsin to congratulate the city for signing up a large percentage of Americans for health care in the Healthy Communities Challenge.

Today, President Obama is in Milwaukee, Wisconsin to celebrate the city’s victory in the Healthy Communities Challenge, a competition among 20 cities to increase the number of Americans with health insurance during the latest Health Insurance Marketplace open enrollment period.

People in Milwaukee took 1st place by signing up 38,000 of their neighbors for health coverage through the Affordable Care Act. Together with returning enrollees, 89,000 signed up for a 2016 health plan.

Brent, a Republican from Milwaukee, thanked the President for saving his life.

Brent Brown never voted for President Obama. But after recovering from a serious autoimmune disease, he wrote the President to thank him for the quality health care he got through the Affordable Care Act. Watch Brent tell his story:

"I have never voted for President Obama, ever." —Brent Brown, a Republican from Milwaukee. Watch him tell the story of how the Affordable Care Act saved his life: http://go.wh.gov/L1HMm3 #GetCovered

The President met with more Wisconsinites with stories like Brent's.

Here's what one of them wrote to the President:

"Fortunately I am a very healthy 63-year old woman. Yet, basic medical expenses, such as an annual physical and mammogram, a benign breast tumor, and a really bad sinus headache that sent me to the ER last year, wiped me out financially … over $30,000 in medical debt! & … Finally, in 2015 under the ACA, my annual premium comes to $4,000, with a $500 deductible, and an incredible medication co-pay of $5, or a total of $10 a month. When I was approved under the ACA, I felt empowered. It was an exciting day. It won’t remedy the past, but it will give me the chance to eventually catch up."

Today, more than 90% of Americans now have health coverage.

Thanks to the Affordable Care Act, this is what health care in America looks like today: 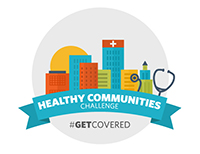 In November 2015, the White House launched the Healthy Communities Challenge to engage key communities with particularly high impact for getting people covered. The Challenge focused on 20 communities with large numbers or high percentages of uninsured people, where strong federal, state and community collaboration could have a big impact on reaching people who weren't yet covered.

Congrats to Milwaukee for winning the Healthy Communities Challenge! You signed up 89,000 people for health coverage through the Affordable Care Act, and President Obama is excited to come thank you in person on Thursday: http://go.wh.gov/Pt3Hea #GetCovered

Communities used innovative tactics to reach out: In New Orleans Mayor Mitch Landrieu has made ACA resources available on the city website and challenged barbers and hairstylists to connect their customers to free, in-person enrollment assistance. In Milwaukee, Mayor Tom Barrett  opened many city facilities and libraries to host regular enrollment events with licensed healthcare navigators. Learn more about the Healthy Communities Challenge.