This Day in History: The 1913 Women's Suffrage Parade

March 3, 2016 at 9:32 AM ET by Danielle Cohen
Twitter Facebook Email
Summary:
During Women’s History Month, the White House pays homage to the trailblazers who fought for women’s suffrage over a century ago.

On this day 103 years ago, thousands of women gathered in Washington, D.C. to call for a constitutional amendment guaranteeing women the right to vote. While women had been fighting hard for suffrage for over 60 years, this marked the first major national event for the movement.

The huge parade, which was spearheaded by Alice Paul and the National American Woman Suffrage Association, was held on March 3, 1913. Riding atop a white horse, lawyer and activist Inez Milholland led over five thousand suffragettes up Pennsylvania Avenue, along with over 20 parade floats, nine bands, and four mounted brigades.

The organizers of the parade also maximized attention on the event by strategically hosting it just one day before the inauguration of President-elect Woodrow Wilson. This tactic worked. As the women marched from the U.S. Capitol toward the Treasury Building, they were met by thousands of spectators, many in town for the inauguration.

Not all spectators were kind. Some marchers were jostled, tripped, and violently attacked, while police on the parade route did little to help.  By the end of the day, over 100 women had to be hospitalized for injuries. However, the women did not give up; they finished the parade. Their experiences led to major news stories and even congressional hearings. Historians later credited the 1913 parade for giving the suffrage movement a new wave of inspiration and purpose.

“In the face of discrimination and undue hardship, [women] have never given up on the promise of America:  that with hard work and determination, nothing is out of reach.”
President Obama proclaiming Women’s History Month 2016 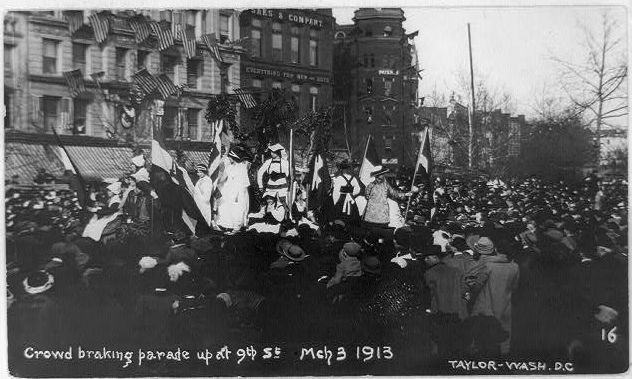 While it took another seven years for the Nineteenth Amendment to be ratified on August 18, 1920, the women who marched on this day in history accomplished their goal of reinvigorating the suffrage movement. As the official parade pamphlet read, they gave “expression to the nation-wide demand for an amendment to the United States Constitution enfranchising women.”

“For too long, women were formally excluded from full participation in our society and our democracy.  Because of the courage of so many bold women who dared to transcend preconceived expectations and prove they were capable of doing all that a man could do and more, advances were made, discoveries were revealed, barriers were broken, and progress triumphed.”
President Obama proclaiming Women’s History Month 2016

Alice Paul, Inez Milholland, and the others who marched in 1913 are just some of the women who made a more just and prosperous future possible for all Americans. While these women paved the way for equality at the ballot box, the Obama Administration is still fighting every day to increase equality for women and girls. From creating the White House Council on Women and Girls, to appointing two women to the Supreme Court and a strong team of women leaders to his Cabinet and White House staff, President Obama has taken concrete steps to ensure that women’s voices are heard in government and society.

Throughout Women’s History Month, we’ll update you on the important work the Obama Administration is taking to support women in the workplace, expand women’s access to quality and affordable health care, increase opportunities for girls pursuing STEM education, protect women from violence, support women in the military and female veterans, and much more.

During #WomensHistoryMonth, we remember the trailblazers who opened doors for women today → https://t.co/kgDEpU4IJn pic.twitter.com/rJcyuNtI6i

Danielle Cohen is an intern in the Office of Digital Strategy