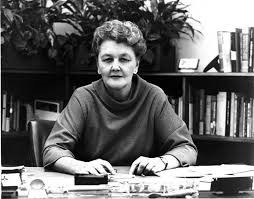 Marty worked as a magazine editor, art critic, and photojournalist for renowned magazines such as Vogue, Harpers, and Tattler. However, she had an alcohol use disorder – and it progressed to the point where she was no longer able to hold a job, drifting in and out of homelessness while living abroad in London. In 1936, she returned to her family in the United States and sought help from doctors. Marty twice attempted suicide before discovering Alcoholics Anonymous (AA).

She described the “revelation” she had reading an early copy of Alcoholics Anonymous:

“I wasn’t the only person in the world who felt and behaved like this! I wasn’t mad or vicious – I was a sick person. I was suffering from an actual disease that had a name and symptoms like diabetes or cancer or TB – and a disease was respectable, not a moral stigma.”
Marty Mann

Even though she began a successful path to recovery as one of the first women to join AA, Marty found that other women were often reluctant to seek help. At the time, many people believed that alcohol use disorder among women was caused by underlying psychiatric problems, and that alcohol use problems were more pathological among women than among men.

In 1944, with funding from the Yale Center on Alcohol Studies, Marty founded the National Committee for Education on Alcoholism (NCEA) to reduce stigma and help people get the treatment they needed. A main tenet of the organization’s mission was that alcoholism is a public health problem, and therefore a public responsibility. Marty credited her life partner, Priscilla Peck, with encouraging her to write the book, Primer on Alcoholism, and with helping her conceptualize the NCEA.Today this organization is called the National Council on Alcohol and Drug Dependence (NCAAD) and has expanded its work to include other substance use disorders.