Today, as part his efforts to escalate the fight against the prescription opioid abuse and heroin epidemic, the President will join individuals in recovery, family members, medical professionals, and law enforcement officials at the National Rx Drug Abuse & Heroin Summit in Atlanta, Georgia.

At the event, he'll take questions from Justin Luke Riley, President of the Young People in Recovery group: 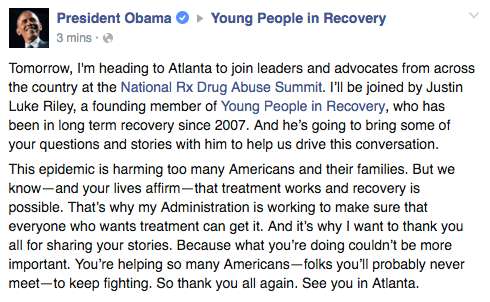 The prescription opioid abuse and heroin epidemic claims the lives of tens of thousands of Americans each year. The President has made clear that addressing this epidemic is a priority for his Administration, and has escalated the fight against the epidemic on three different fronts: expanding access to treatment, preventing overdose deaths, and increasing community prevention strategies.

Here are some highlights from the new actions announced today:

Increasing access to a key drug for medication-assisted treatment

The Department of Health and Human Services (HHS) is issuing a proposed rule to increase the current patient limit for qualified physicians who prescribe buprenorphine to treat opioid use disorders from 100 to 200 patients with the goal of expanding access to this evidence-based treatment while preventing diversion. The proposed rule aims to increase access to medication-assisted treatment and behavioral health supports for tens of thousands of people with opioid use disorders.

Why this matters: Buprenorphine is an FDA-approved drug that, because of its lower potential for abuse, is permitted to be prescribed or dispensed in physician offices, which significantly increases its availability to many patients. When taken as prescribed, buprenorphine is safe and effective. Existing evidence shows that this lifesaving, evidence-based treatment is under-utilized. Updating the regulations around the prescribing of buprenorphine-containing products, as proposed today, would help close this treatment gap. Learn more here.

The Substance Abuse and Mental Health Services Administration (SAMHSA) is releasing a new $11 million funding opportunity to states to purchase and distribute the opioid overdose reversal drug, naloxone, and to train first responders and others on its use along with other overdose prevention strategies.

SAMHSA is also releasing a new $11 million funding opportunity for up to 11 states to expand their medication-assisted treatment services. SAMHSA is distributing 10,000 pocket guides for clinicians that include a checklist for prescribing medication for opioid use disorder treatment and integrating non-pharmacologic therapies into treatment.

Addressing the substance use disorder parity in Medicaid

HHS is finalizing a rule to strengthen access to mental health and substance use services for people enrolled in Medicaid and Children’s Health Insurance Program (CHIP) plans by requiring that these benefits be offered at parity, meaning that they be comparable to medical and surgical benefits.

Why this matters: These protections are expected to benefit more than 23 million people in Medicaid and CHIP.

These actions build on the President’s proposal for $1.1 billion in new funding to help every American with an opioid use disorder who wants treatment get the help they need.