Asked and Answered: An 11-Year-Old Daughter of An Incarcerated Individual Shares Her Story

March 30, 2016 at 6:42 PM ET by Ken Meyer
Twitter Facebook Email
Summary:
In a letter, an 11-year-old asked the President to help make it easier for her father to get a job and find the support he needs after he is released from prison.

This is the latest post in our "Asked and Answered" series, in which we periodically feature an exchange between the President or a Senior Administration Official and an American who wrote him. If you'd like to write the President yourself, you can do so here.

Among the 2.2 million people incarcerated in state and federal prisons, more than half are parents of children below the age of 18.

It’s a staggering statistic, with real consequences for the children who live with a parent in prison – many of whom are serving out a punishment that does not fit their crime.

When 11-year-old Madison’s dad was sent to prison, Madison looked for books to help her cope with her sadness and disappointment. When she couldn’t find any that could help her, she wrote her own.

Now, her father is set to be released this August. Madison’s greatest worry is that he won’t have the support he needs to find a job, a home, and a new life that will give them both an opportunity to see each other. So she wrote President Obama to see if there’s anything he can do to help ensure her father and other convicted felons get that support – and President Obama responded.

Read their letters below. 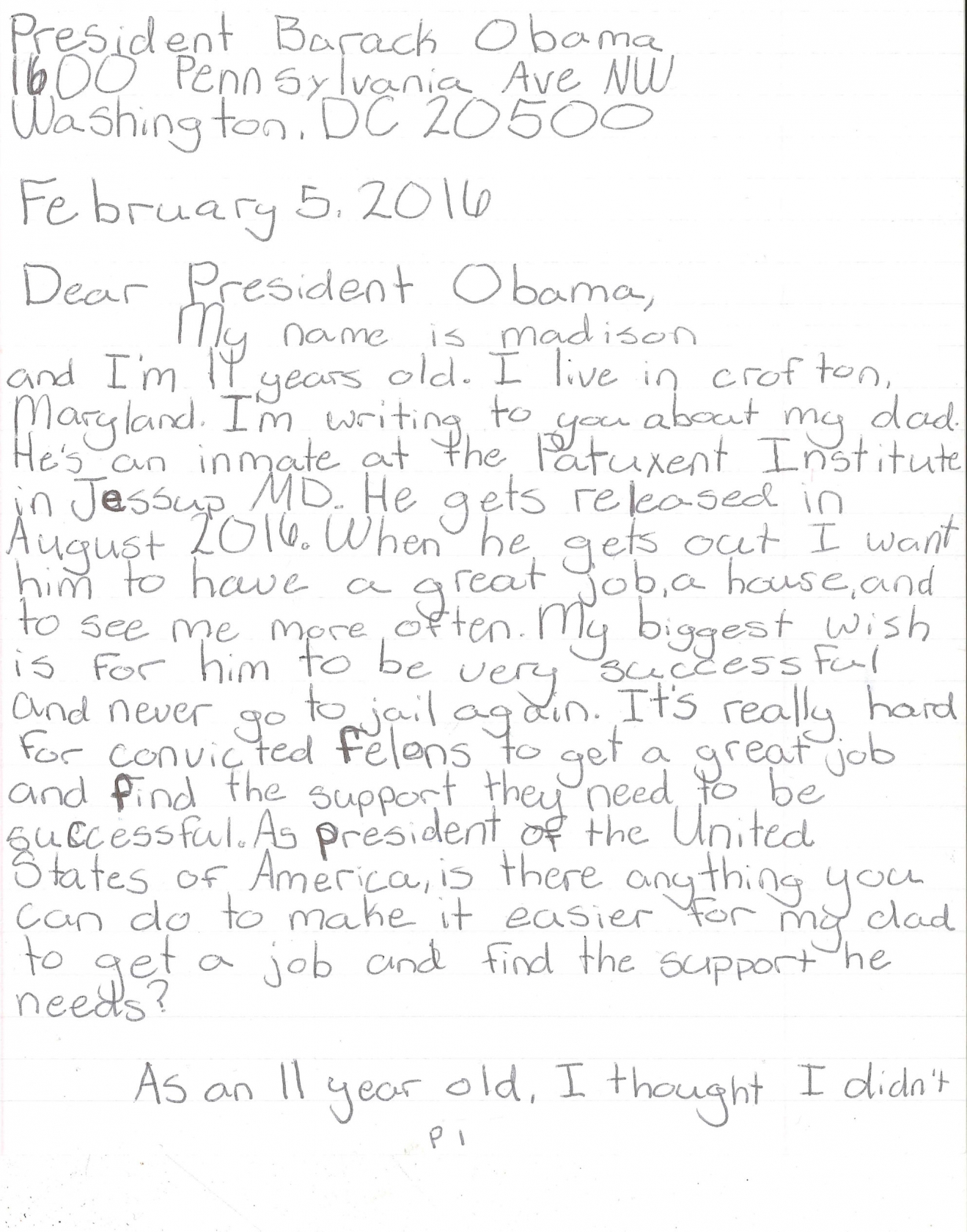 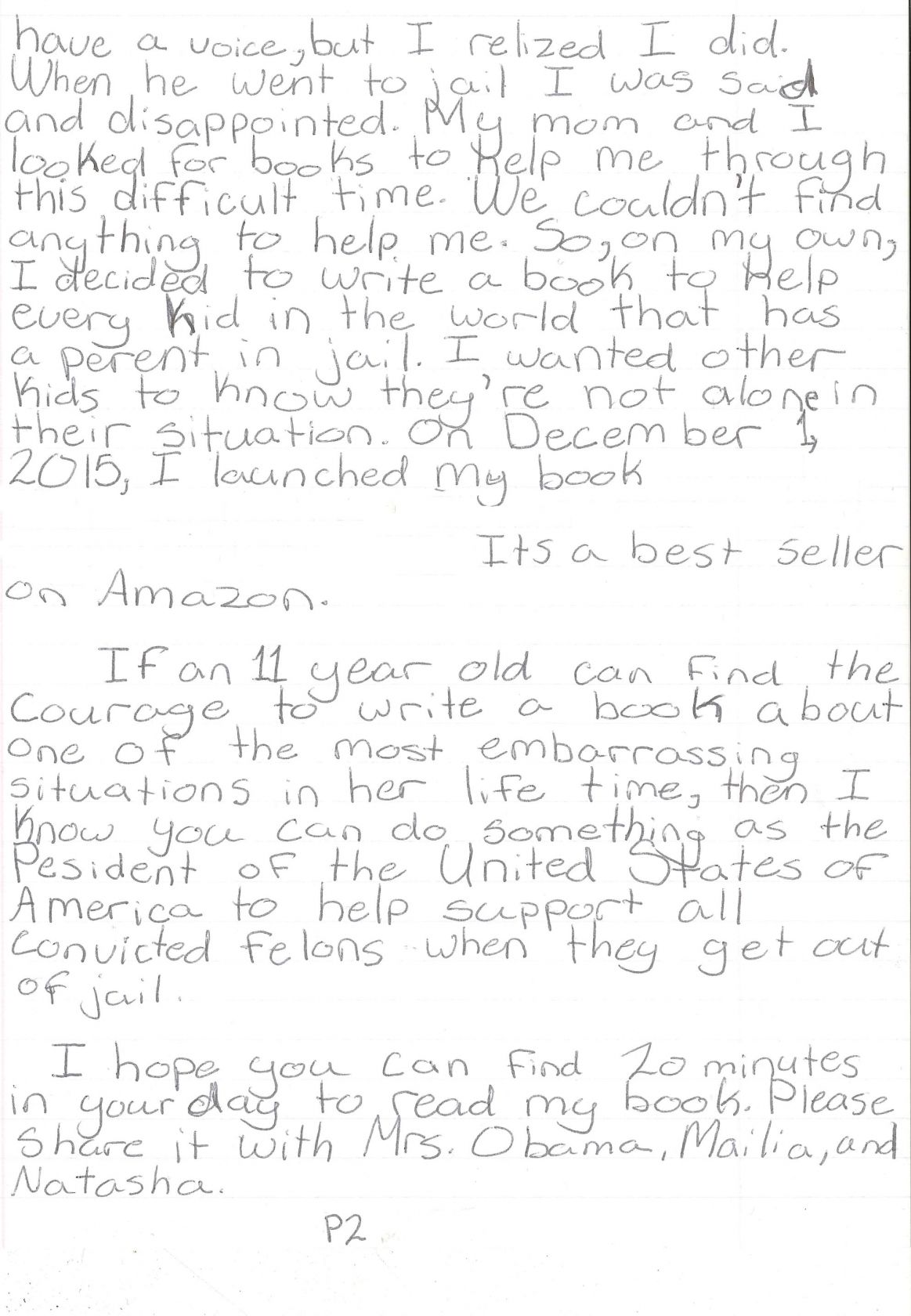 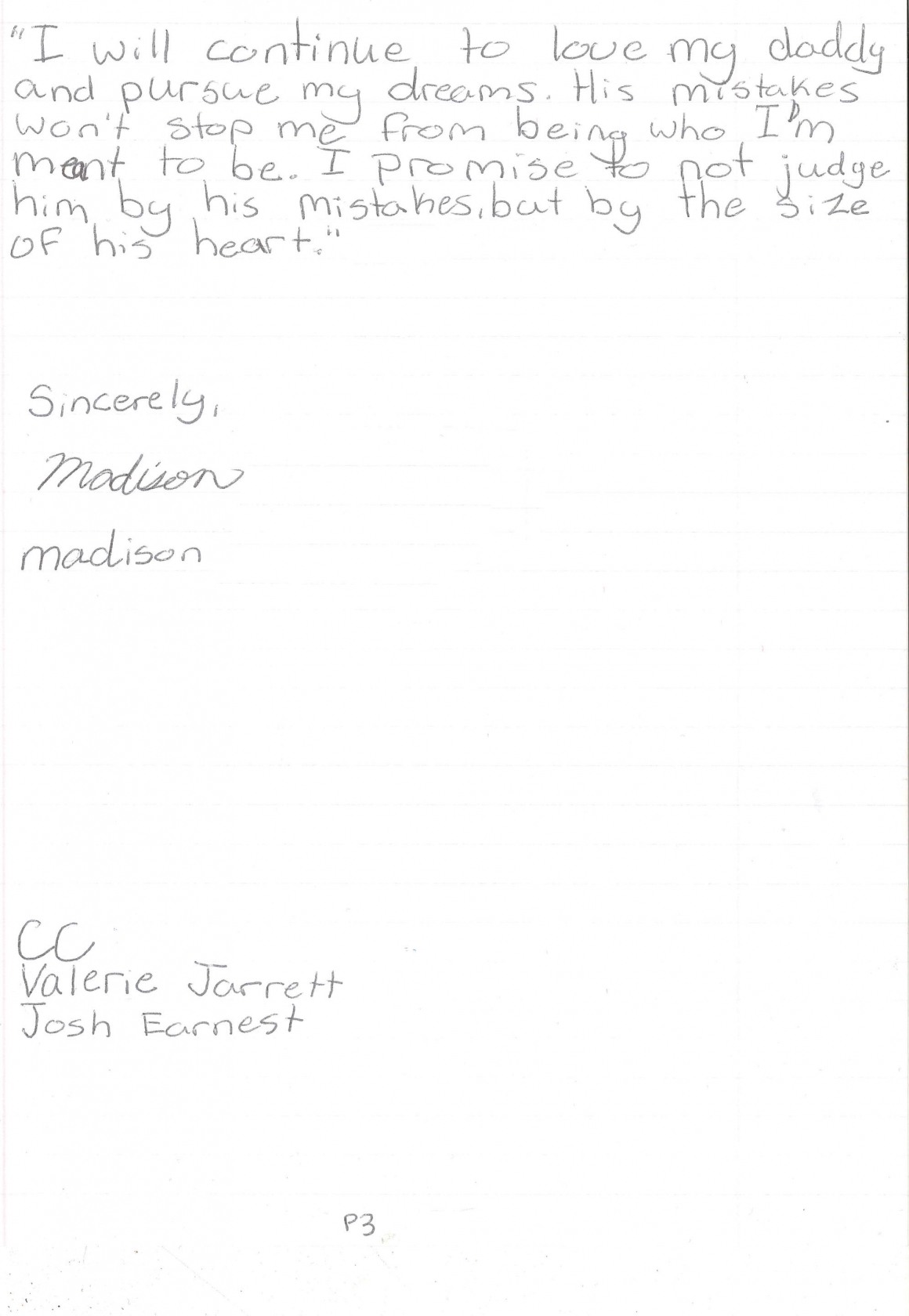 My name is Madison [...] and I'm 11 years old. I live in Crofton, Maryland. I'm writing to you about my dad. He's an inmate at the Patuxent Institute in Jessup, MD. He gets release in August 2016. When he gets out I want him to have a great job, a house, and to see me more often. My biggest wish is for him to be very successful and never go to jail again. It's really hard for convicted felons to get a great job and find the support they need to be successful. As President of the United States of America, is there anything you can do to make it easier for my dad to get a job and find the support he needs?

As an 11 year old, I thought I didn't have a voice, but I realized I did. When he went to jail I was sad and disappointed. My mom and I looked for books to help me through this difficult time. We couldn't find anything to help me. So, on my own, I decided to write a book to help every kid in the world that has a parent in jail. I wanted other kids to know they're not alone in their situation. On December 1, 2015, I launched my book [...] It's a best seller on Amazon.

If an 11 year old can find the courage to write a book about one of the most embarrassing situations in her life time, then I know you can do something as the President of the United States of America to help support all convicted felons when they get out of jail.

I hope you can find 20 minutes in your day to read my book. Please share it with Mrs. Obama, Malia, and Natasha.

"I will continue to love my daddy and pursue my dreams. His mistakes won't stop me from being who I'm meant to be. I promise to not judge him by his mistakes, but by the size of his heart." 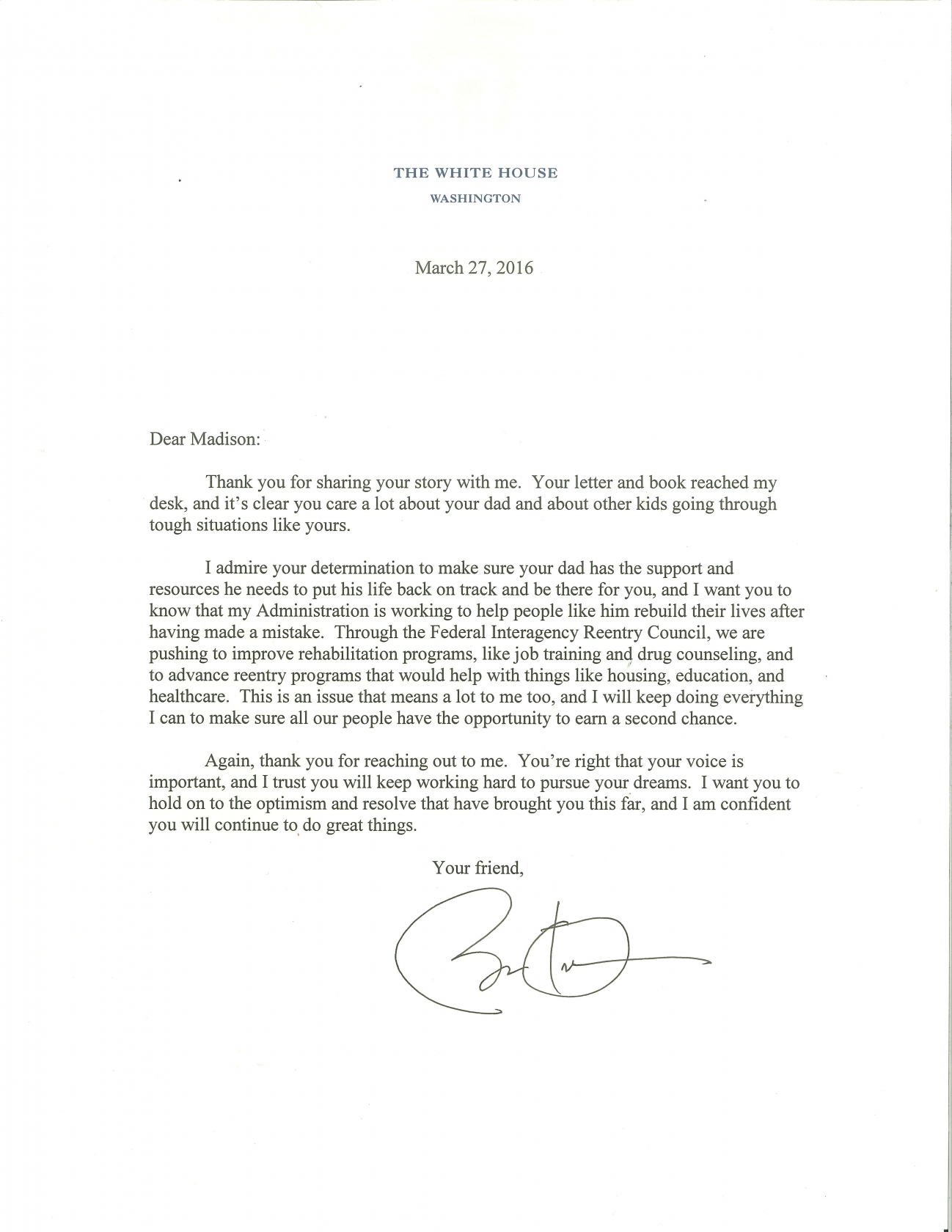 Thank you for sharing your story with me. Your letter and book reached my desk, and it's clear you care a lot about your dad and about other kids going through tough situations like yours.

I admire your determination to make sure your dad has the support and resources he needs to put his life back on track and be there for you, and I want you to know that my Administration is working to help people like him rebuild their lives after having made a mistake. Through the Federal Interagency Reentry Council, we are pushing to improve rehabilitation programs, like job training and drug counseling, and to advance reentry programs that would help with things like housing, education, and healthcare. This is an issue that means a lot to me too, and I will keep doing everything I can to make sure all our people have the opportunity to earn a second chance.

Again, thank you for reaching out to me. You're right that your voice is important, and I trust you will keep working hard to pursue your dreams. I want you to hold on to the optimism and resolve that have brought you this far, and I am confident you will continue to do great things.

As part of Women’s History Month and in the lead up to the United State of Women Summit, the White House is highlighting stories of women and girls who have been impacted by the criminal justice system, including children of incarcerated parents.

The President believes America is a nation of second chances. That’s why he has commuted the prison sentences of 248 people, including 61 individuals announced today, most of whom are low-level drug offenders whose sentences would have been shorter if they were convicted under today’s laws. White House Counsel Neil Eggleston explains here.