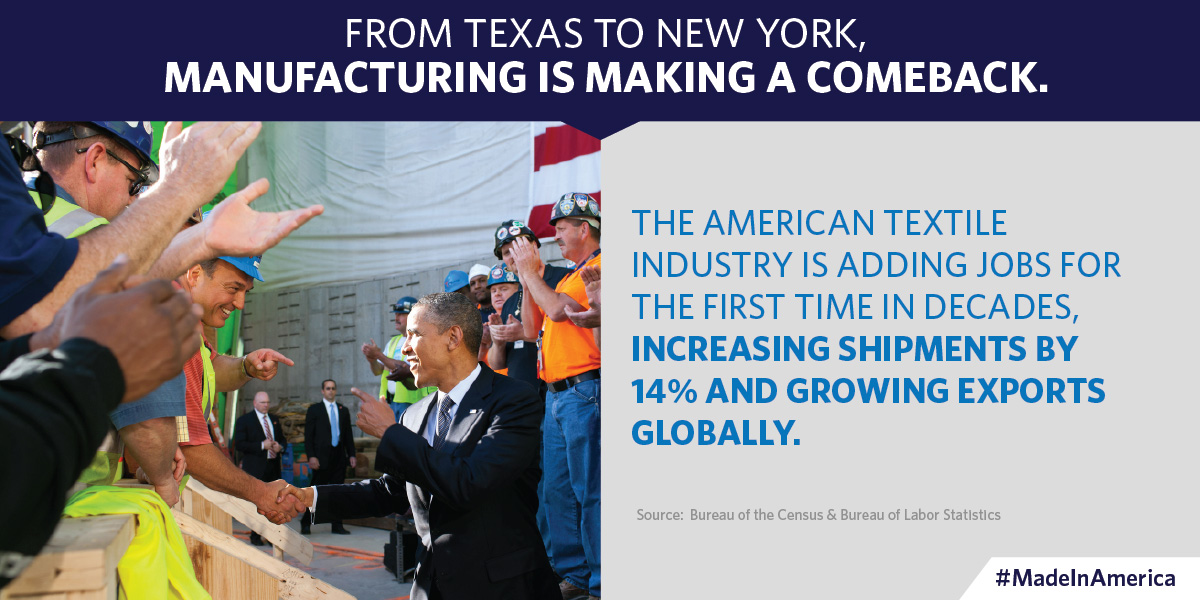 When President Obama took office, many had been arguing for years that U.S. manufacturing was facing an inexorable decline, that production in the U.S. was no longer competitive globally, and that the closure of factories all around the country was a part of the natural transition to an information economy. President Obama never accepted those arguments, having long understood that a country’s ability to make things is inextricably linked to a country’s ability to innovate. The President’s commitment began with rescuing the auto industry from the brink of collapse and saving more than 1 million American jobs, but it did not end there.

As the country emerged from recession and the auto industry began to get back on its feet, the President recognized that if we were going to seize the opportunity to revitalize our manufacturing sector, the entire country would need to come together and invest in public-private partnerships that leverage our uniquely American strengths. That’s why in 2012 he launched the National Network for Manufacturing Innovation, to help reinvent and reinvigorate U.S. manufacturing and keep us on the cutting-edge of competitiveness for the next generation of manufacturing jobs and investment.

Federal investments of over $600 million in the institutes have had a catalytic impact, attracting more than $1.2 billion in private sector resources for collaborative, precompetitive research and development to transition groundbreaking manufacturing technologies out of the lab and into production.

Today, U.S. Defense Secretary Ash Carter announced the latest manufacturing hub, headquartered in Cambridge, MA. The Revolutionary Fibers and Textiles Manufacturing Institute will be focused on U.S. leadership in manufacturing innovative fabrics and textiles with novel properties--ranging from being incredibly lightweight and flame resistant, to having exceptional strength and containing electronic sensors. With wide-ranging applications, these technical textiles can forge protective gear for firefighters impervious to the hottest flames, replicate the sensing capabilities of a smart watch into a lightweight fabric, or detect when a wounded soldier needs to be treated with an antimicrobial compression bandage.

With today’s announcement, the Administration has now awarded eight manufacturing innovation institutes, having partnered with a total of over 800 manufacturers, universities, and non-profits to strengthen U.S. competitiveness for manufacturing jobs and investment. Federal investments of over $600 million in the institutes have had a catalytic impact, attracting more than $1.2 billion in private sector resources for collaborative, precompetitive research and development to transition groundbreaking manufacturing technologies out of the lab and into production. And while still in its early stages, the network of manufacturing hubs is having a real impact around the country.

From Texas to New York, manufacturing is making a comeback

Lloyd Whetzel, CEO of X-FAB’s semiconductor foundry in Lubbock, Texas, knows firsthand that for the U.S. to stay competitive for manufacturing jobs and investment we have to innovate ahead of the curve. Through X-FAB’s partnership with Power America, the power electronics manufacturing innovation institute headquartered in North Carolina, the Texas facility was able to accelerate the development of new semiconductor technology it needed in order to pursue new lines of business that could keep the facility open and protect more than 400 jobs. As Lloyd says:

“X-FAB Texas is a commercial entity and the PowerAmerica Institute is the first federally-funded program in which we have participated. This program has been an outstanding success. It allows this facility to pivot to a new, emerging market and not only retain the jobs we have in place, but provide the foundation for employment expansion as business grows.”

Textiles manufacturing, once the poster child for job-loss and offshoring, is now making a comeback.

Today’s announcement is adding new innovation and new hope to an industry that some thought would not be able to persist in America. Textiles manufacturing, once the poster child for job-loss and offshoring, is now making a comeback. Fueled by revolutionary new technologies, the American textile industry is adding jobs for the first time in decades, has increased shipments by 14 percent since 2009, and has grown exports by 39 percent since 2009. Today’s new manufacturing institute will invest over $300 million of public-private investment to further accelerate this recovery and strengthen U.S. leadership in novel textiles.