Why You Should Care About New Actions to Tackle Corporate Inversions

"When companies exploit loopholes like this, it makes it harder to invest in the things that are going to keep America’s economy going strong for future generations. It sticks the rest of us with the tab. And it makes hardworking Americans feel like the deck is stacked against them."
President Obama, April 5, 2016

The Treasury Department announced new rules that takes aim at one of these loopholes: corporate inversion.

Inversion is when a company moves its tax residence overseas on paper, typically to a low-tax country, to avoid paying their fair share in taxes here at home.

When multinational corporations exploit these loopholes -- enjoying the many benefits of locating in the United States without responsibly paying into the system -- it erodes the American tax base, undercuts businesses that play by the rules and ultimately leaves the middle class and small businesses to pay the tab.

How these new rules will make it more difficult for companies to invert:

First, the Treasury Department is issuing a temporary rule to make it less beneficial for foreign companies to acquire multiple U.S. subsidiaries over a short window of time or through a corporate inversion. The new rule would curb this practice by preventing a foreign company that acquires multiple American companies in stock-based transactions from using the resulting increase in size to avoid the current inversion thresholds for a newly acquired U.S. subsidiary. For more information how these rules work, go to treasury.gov.

Treasury is also proposing new rules to tackle a practice known as "earnings stripping." After a company has moved its tax residence overseas, the U.S. subsidiary of the newly multinational company can take a loan from its foreign parent company. By issuing a debt against their new foreign company, the U.S. subsidiary can reduce its tax bills without these internal loans showing up on their earnings statement. This tax strategy is known as earnings stripping.

Genuine cross-border mergers make the U.S. economy stronger by enabling U.S. companies to invest overseas and encouraging foreign investment to flow into the United States. But business decisions should be driven by genuine business strategies and economic efficiencies, not by accounting gimmicks that game our broken tax system.

How inversions should be stopped altogether:

Today’s actions build on the steps Treasury has already taken to reduce the tax benefits of -- and when possible, stop -- corporate inversions, which have helped reduce the pace of these transactions. But only Congress can stop inversions outright, which is why the President has proposed to fully close the loophole that allows for corporate inversions in each of his last three Budget proposals.

Congress should follow the Administration’s lead by supporting workers and businesses that play by the rules rather than protecting corporations that ship jobs and profits overseas. 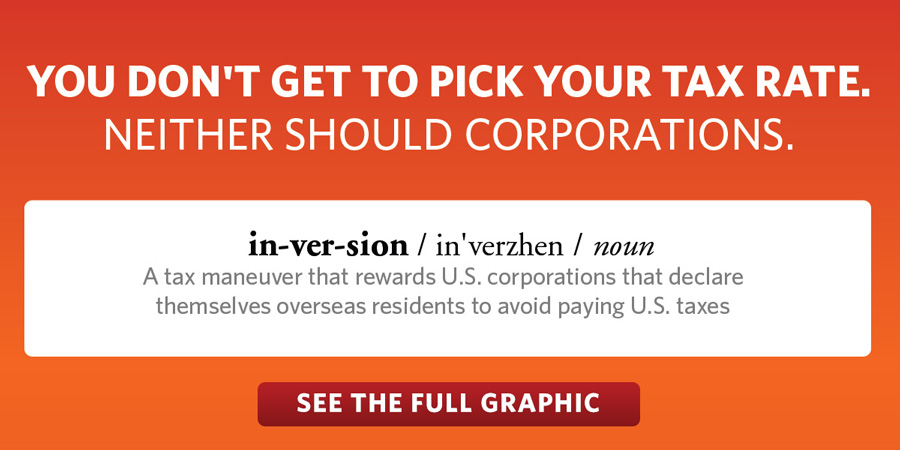